Your purple prose just gives you away

• Groomers. Weird that our current moral panic and political campaign based on accusations of a pedophile conspiracy has nothing to say about the $87.5 million settlement ordered against “cultural conservatives” who participated in or covered up the sexual abuse of hundreds of children over more than 70 years.

• Groomers. Weird that our current moral panic and political campaign based on accusations of a pedophile conspiracy has nothing to say about the “cultural conservatives” whose teachings sexualize every aspect of young people’s lives and include creepy marriage-like rituals for pre-pubescent children.

• Religion News Service covers “The scientific meltdown over a controversial discovery of ‘biblical Sodom.’” Kind of. We looked at this story a while back (see “A night with Lot in Sodom: On meteors and memory” and “A night with Lot in Sodom, better see that twice“) and Jerry Patengale’s brief overview only skims the surface of the obsessive strangeness underlying this Duel of the Crackpots.

The Tall el-Hammam dispute involves two different groups of self-proclaimed mavericks insisting that they alone are right while all the so-called experts are wrong. These factions — young-earth creationist “biblical literalists” and the dubious obsessives of the Comet Research Group — have agreed to a tentative alliance. The comet folks will support the creationists’ claim to have “found the biblical Sodom,” and in exchange the creationists agree to help promote the Tunguskas-all-the-way-down claims of the comet fans. 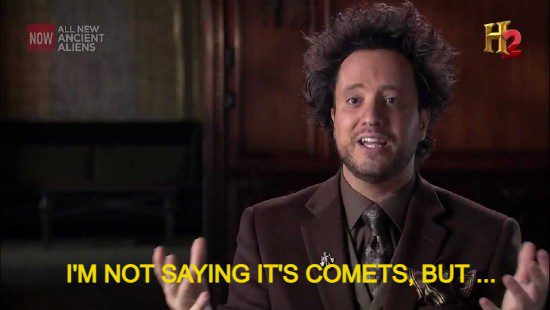 Alas, this alliance doesn’t quite provide the validation either faction seeks. Support from a group of quirky Ph.D.s who all affirm the reality of an ancient universe doesn’t enhance the “biblical literalist’s” standing among his fellow young-earthers. Nor does the support of a “biblical literalist” help those scientists in their somewhat desperate quest for respect from their skeptical scientific peers.

Patengale notes one big problem for the Tall el-Hammam=Sodom proponents, which is that the timeline doesn’t fit. Biblical literalists would love to get behind “proof” of the literal destruction of a literal Sodom, but they’re not eager to exchange that for proof that the rest of Genesis and Exodus can’t also be read as literal history. They’ve probably also noticed that the ancient city of Tall el-Hammam was rebuilt and reoccupied after its destruction — something that a “literal” reading of the story of Sodom doesn’t allow.

Anyway, something happened at Tall el-Hammam, The folks who say that everything can be explained as proof of the literal history of the Bible say that explains this and the folks who say everything is because of comets say this was because of comets. I’m sure the ancient astronaut people would say that Tall el-Hammam was destroyed by ancient astronauts, but I doubt that’s accurate either.

• Steve Buchheit shares a wild, creepy story of a lawless, vindictive petty tyrant in eastern Ohio: “Contempt of Court: We Need to Talk About Geauga County Judge Timothy Grendell.” This guy employs an armed “constable” to enforce … well, whatever it is he wants his armed henchman to enforce.

• Very Silly Man and Benjamin-Button Martin Niemöller Eric Metaxas is now peddling an “EMF Pendant Necklace” that he assures listeners will protect them from Covid and from “Everyday EMF Radiation That is a Danger To Your Health!” OK, then.

As a Gen-Xer, I can’t read that nonsense about “EMF” whatever without finding it … Unbelievable.