Only later, after the euphoria of that surprise has worn off, do you realize that the happiness of this happy ending doesn’t really make sense. It doesn’t add up. 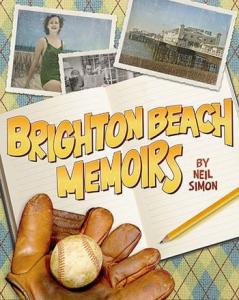 Or, rather, this happy ending adds up, but only because the story presumes and requires that what happens next will be a bona fide miracle. In retrospect that seems like cheating, but at the time, in the closing moments of the play, neither the characters in the story nor the real, live people in the audience seem to view that miracle as at all strange or unlikely.

What happens, briefly, is this (what follows, I suppose, is something of a spoiler, but I don’t think it will actually spoil the story for you even if you’ve never seen it):

The Jeromes, an extended Jewish family, are struggling to get by in 1937 in a Brooklyn home that’s far too small for comfort or privacy. They have been surviving — just barely or perhaps not quite — on the too-small incomes of the sickly father and older brother, but the father has now lost his job.

This is where the play is about to end. The family is destitute and they seem to be on the verge of losing their home.

And then a letter arrives:

JACK: It’s a letter from London. My cousin Sholem got out. They got out of Poland. They’re free … His wife, his mother, all four children. They’re sailing for New York tomorrow. They’ll be here in a week. … They had to sell everything. They took only what they could carry. … They got out. That’s all that’s important. They got out.

They got out. They have nothing — no jobs, no money, no prospects — but they got out and they will be safe in Brooklyn in a week.

At this joyous news the despair evaporates and they all live happily ever after. Curtain. The End.

But again this doesn’t add up. The too-small house is about to get even more crowded. The penniless and desperate cousins will just be seven more mouths that the family can’t afford to feed living in a house that they can’t afford to keep. Why is everyone acting as though this letter means that suddenly everything is going to be just fine?

The arithmetic of this happy ending can’t be made to work. The problem of too many people with not enough can’t be corrected by adding even more people with even less.

What’s going on, I think, is a different kind of math — one that isn’t easily reconciled with the laws of arithmetic or, for that matter, with any other laws of the physical universe.

The Jeromes are acting on the mathematics of miracle, the laws of manna and the calculus of loaves and fishes. This preposterous logic denies the reality of anything we might think of as a zero-sum equation. When it seems there isn’t enough to go around, this illogical logic says, find others with even less and cut them in too. It’s response to any apparent scarcity is always the same: Share. Share more and share more widely and there will be enough. Scarcity + sharing = sufficiency.

This is, arithmetically speaking, nuts. And the more you grasp what it’s really suggesting, the nuttier it seems.

Take for example that story of the loaves and fishes. At first glance, this might not seem as flashy or impressive as some of the more marquee miracles in the Bible — the parting of the Red Sea or that bit with Lazarus, for instance — but it’s far more troublesome when you really consider what’s being described in that story. The story tells us that something is being made out of next to nothing. Not wine from water, but food from nothing.

This is a fundamental violation of the laws of physics — a shrieking impossibility. The story flies past the conservation of mass without a second glance, like a texting driver through a red light.

And that’s exactly the logic we encounter at the end of Brighton Beach. That’s the irrational logic according to which the Jeromes and the audience delude themselves into believing that they’ve reached some kind of resolution, some kind of happy ending.

But before we dismiss this madness completely, consider this: What else would you have the Jeromes do?

The zero-sum equation is inflexible and unambiguous. The scarcity is quantifiable and undeniable. The addition of these impoverished cousins who have escaped hell on earth and will be arriving in desperate need cannot be made to add up. So it cannot be allowed. Thus the arithmetic requires that Sholem, his wife, his mother and all four children be turned away.

Which equation seems more sensible to you?

Any purported laws of the universe that are unable to account for them — or for the billions of others like them — aren’t really laws at all. We can’t pretend the numbers add up just by conveniently excluding them from our balance sheet.

The arithmetical problem ultimately turns out to be fairly simple. We can add these people to the equation or we can subtract them from it.