MacArthur’s latest book revisits one of his long-time “concerns” (cue the stock expression of saintly faux-lamentation): He doesn’t much care for Pentecostalism and “charismatic renewal” churches. The new book is called Strange Fire: The Danger of Offending the Holy Spirit With Counterfeit Worship. If that title sounds like he’s accusing Pentecostals and other charismatic Christians of “counterfeit worship” that “offends the Holy Spirit,” that’s because that’s exactly what he’s doing.

There are half a billion Pentecostal/charismatic Christians around the world, but MacArthur doesn’t want you to think he’s dismissing their faith as “counterfeit” lightly. He’s only saying this because John MacArthur speaks for real, true, error-free Christianity. Just ask him, he’ll tell you:

So if you’re looking for some namby-pamby post-modernist dithering about chastened epistemologies and all that crap from French philosophers who say we see “through a glass, darkly,” or that we can only “know in part,” John MacArthur wants you to know he’ll have none of it. The absolute truth is absolutely accessible to him, and if you don’t see that then, well, you’re just denying the Bible.* 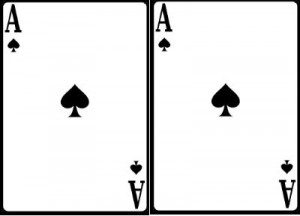 Anyway, MacArthur kicked off his new book with a “Strange Fire” conference — a big anti-Pentecostal-palooza attended by some 4,000 people and streamed live on the Web for his fans around the world.

As you can imagine, this hasn’t gone over well with those blasphemous counterfeit Pentecostal types.

John MacArthur quotes the Bible — the infallible, inerrant, inspired “Word of God” which he says is the ultimate arbiter of absolute truth. And MacArthur says the Bible says he’s right and the Pentecostals are wrong.

The Pentecostals quote the Bible — the infallible, inerrant, inspired “Word of God” which they say is the ultimate arbiter of absolute truth. And they say the Bible says they’re right and MacArthur is wrong.

But it is undeniable that they are both wrong about the Bible.

Neither side is able to acknowledge this, of course. They’re both playing their trump card by appealing to the inerrant Bible. “Take that!” they cry in unison, slapping down identical cards. “That’s the ace of spades and nothing beats the ace of spades!” But both sides are shouting too loudly to hear that the other person is saying the same exact thing. Both sides are so supremely confident in the power of their top card that they can’t bother seeing that their opponent is playing the same exact card.

Ace of spades vs. ace of spades. That’s a tie. But that’s not supposed to happen. That’s the whole point of having “biblical inerrancy” as your trump card — it’s the ultimate tie-breaker. When both sides play the same card, that tie-breaker doesn’t work. What good is a deck with 52 aces of spades?

This is usually when things get ugly. The only way to preserve their assumption about the Bible providing clear, unambiguous access to absolute truth is to jump to the conclusion that anyone who reads it differently must be “deceived” or deliberately attempting to deceive others.

That’s where MacArthur goes in that nasty Christian Post piece linked above. Not surprising, since he has a long history of going there and seems to relish the opportunity. I’m sure we’ll see many responses in unkind kind from the other side.

Both sides have to do this. It’s their only hope for preserving this inerrantist model.

You can see this dynamic at work in some of the heated comments to David Hayward’s heartfelt response to MacArthur’s “Strange Fire” attack. One poor guy just keeps insisting that all we need to do to sort out this dispute is to turn to the Bible and see what it says. He even quotes a Bible passage that affirms this approach. The Bible has to provide clarity and certainty — it just has to, or all is lost. He burns “with desire to find solid ground and an ultimate sure foundation whereon to build a tower reaching to the Infinite.” Without such an ultimate sure foundation — an inerrant, infallible “Word of God” providing access to absolute truth and a trump card for every dispute — then “our whole groundwork cracks, and the earth opens to abysses.”

I appreciate that desire. Access to absolute truth — like flight, immortality, invincibility, time travel, and limitless free refills — would be awesome. But it’s not part of the deal for us humans. We’re finite and fallible. We are not gods. We are not God. Even if such a thing as an inerrant and infallible Bible existed, there would be no inerrant and infallible human capable of reading it as such.

This whole “Strange Fire” fight is nothing new. Charismatic and anti-charismatic fundies and evangelicals have been having this same fight for most of the last century.

I’ve written here before about earlier iterations of this same dispute, and how a provisional cease-fire between the two factions in this very same fight was for me a saving grace at the private fundamentalist Christian school I attended growing up. That uneasy truce made me constantly aware that, despite its claims, belief in a self-evidently inerrant Bible did not really provide unambiguous access to absolute truth, and that it could not be relied on to settle all disputes. Here’s a bit, again, from that post:

When I was a student at TCS, I had many classmates and teachers who were members of Pentecostal and Assemblies of God churches. Those churches were just as fundamentalist as my own, and our churches were fully in agreement on many points of fundie doctrine — young-earth creationism, Rapture prophecy, inerrantism, literalism, KJV-onlyism, etc. (This was the late 1970s and early ’80s, so anti-abortionism hadn’t yet arisen to eclipse all of those as the pre-eminent identifier.)

But those Pentecostal and AofG churches also taught the charismatic gifts of the Holy Spirit, including a big emphasis on speaking in tongues, which they taught was the sign of the baptism in the Spirit and a necessary mark for any true Christian.

At my independent, fundamentalist Baptist church, speaking in tongues was forbidden. It was seen as, at best, a heresy, and at worst as evidence of demonic possession. Anything even slightly charismatic-seeming was frowned on at my church. I remember once someone raised their hands above their head during worship. Once.

… The form of fundamentalism taught by our church was utterly incompatible with the form of fundamentalism taught by some of my classmates’ and teachers’ churches. Our church taught that they were not legitimate Christians, and their church taught that we were not legitimate Christians. Both sides took this disagreement very seriously, with the denial/acceptance of speaking in tongues regarded as a theological disaster equivalent to embracing evolutionary science or textual criticism. Each side regarded the other as violating the all-or-nothing package-deal of fundamentalist Christianity.

And yet there we all were at Timothy Christian School. We were studying together, praying together and taking turns sharing our personal testimonies in chapel together. We were agreeing to disagree, respecting one another despite our differences. We’d have shuddered to hear the word, but our practice was downright ecumenical.

* MacArthur also doesn’t care for Krister Stendahl’s notions of mutual respect. He believes that truth, by its very nature, is separated from respect for error. So he’s not bound to follow Stendahl’s rule about trying to understand another religious perspective by asking “the adherents of that religion and not its enemies.” And he doesn’t seem constrained by Stendahl’s rule saying “Don’t compare your best to their worst”:

Is MacArthur unaware of the many serious, thoughtful theologians who have defended the Pentecostal/charismatic view? Or is he just being a dick by refusing to engage anyone but the most notorious charlatans? Either way, that’s a big problem.