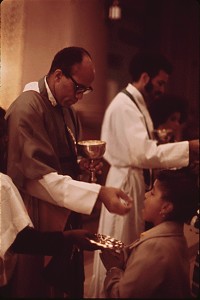 [ NEXT WEEK, July 5-7, The Ekklesia Project will hold its annual gathering in Chicago, which will be on the theme of Slow Church.  Between now and July, we will be running a series of guest reflections here by folks connected with the E.P. We’ve asked guest posters to reflect on the meaning of Slow Church from their own local contexts. More info on the E.P. gathering.  ]

Today’s reflection, the seventh in the series, is by Julia Smucker.

Read the previous post in the series by John Jay Alvaro.

For about the past five years, I have been a participant in the Mennonite/Catholic ecumenical movement known as Bridgefolk – first as a Mennonite drawn toward communion with the Catholic Church but also strongly connected to my ecclesial heritage, and now as a Catholic seeking to maintain that connection with the church that formed me.  I had agonized over the choice I was presented with in the unavoidable reality that joining with one communion would mean breaking with another, and wondered whether I could do so without it being tantamount to a rejection, a cutting off of my roots.  And then I discovered a group of people who had been agonizing over this division for years before me.  In the many honest and in-depth discussions I’ve been a part of since, it’s been clear that these people who are doing their best to bridge two Christian traditions share a deep longing for a fuller communion than we are as yet able to have, as well as an acute awareness that what we long for cannot be attained quickly or easily.  In our commitment to this long and sometimes arduous journey toward reconciliation, we know that we cannot shy away from matters that cause us anguish, and we have frequently dedicated some of our longest and most intensive discussions to the point at which our division is felt most acutely: Eucharistic communion.

As counterintuitive as it may seem to embrace the subject matter that pains us most, it has also paradoxically seemed natural in the context of Bridgefolk, and despite the incompleteness it has borne some real fruit – most tangibly in the retrieval of the ritual practice of footwashing that both our traditions share, which has taken on deep meaning as the closest expression we have to being in communion.  And despite that our lack of full communion is most directly manifest at the communion table itself, participation in both Catholic and Mennonite public worship is a regular and integral part of the annual Bridgefolk conferences.  With communion being a central part of Catholic worship and occurring less frequently in Mennonite congregations, the Catholic participants have often experienced an awkward home-field advantage of sorts.  But at one recent gathering, the Mennonite church we attended did have communion as part of the service, and at last the Eucharistic tables were turned.  In contrast to the usual situation when attending Mass as a group, the issue this time was not one of closed communion but rather of a table thrown wide open, in a way that seemed to me to be jarringly naïve after the lengthy and sometimes anguished group discussions that had been taking place that weekend.

The open invitation was undoubtedly well-intentioned.  But while saying that “Christ invites all to the communion table” was meant to be welcoming, it also contained an implicit judgment on those of us who did not partake: who were we to say no to Christ?  And yet I, who had been so reluctant to choose between communions, now felt that it would have been neither fair nor honest to take what was so glibly offered by well-meaning people who could not have known all that we had been working through so intensively.

Fuller unity is of course what we continue to strive for, however and whenever that may be realized.  In this striving we know that we cannot simply pretend to have arrived where we yet are not, nor can we ever be content with where we are.  These experiences have taught me that the choice that inherited divisions required me to make did not in fact have to entail a rejection of where I have come from, because despite these divisions it is indeed possible to be somehow at home in both traditions.  Still and always, we are working, struggling, journeying toward a deeper and truer unity, however agonizingly incomplete it may yet be. 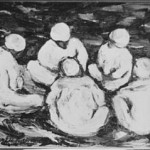