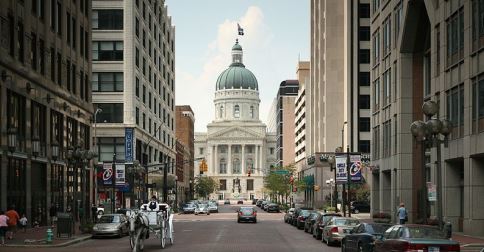 An article broke in the Indianapolis Star this afternoon, announcing that in response to Indiana’s newly signed RFRA bill, major corporation Angie’s List would be cancelling plans for an expansion to their campus on Indianapolis’s Near Eastside.

Key bits of the Star article:

“The proposed expansion of the online consumer ratings service was touted to add 1,000 good-paying jobs over five years and help revitalize a struggling Eastside neighborhood.”

“Angie’s List is open to all and discriminates against none,” [Angie’s List CEO Bill] Oesterle said, “and we are hugely disappointed in what this bill represents.”

I was deeply torn by this news…

On one hand, I understand Angie’s List’s desire to send a powerful message to our narrow-minded governor that they will not tolerate this bill that could allow for discrimination against members of the LGBT community…

On the other hand, this is going to be a deep wound for our Near Eastside neighborhoods, especially for the plans for economic development, setting us back a year, two years or more. I have friends who have worked hundreds of hours to make this deal happen, only to have it cast aside with little or no conversation in a manner that seems pretty capricious. Neighbors took the opportunity to work with Angie’s List, not because we were particularly fond of the company or their line of work, but because they were already part of our neighborhood and were willing to make significant investments that could be leveraged to promote further economic development along the struggling East Washington Street Corridor.

There are many corporations here in Indianapolis that have been unwavering in their opposition to this bill (Eli Lilly, NCAA, etc.), and who have been more attentive to the ramifications of their actions. Even GenCon one of the first and loudest voices of opposition intends to fulfill their contract here, and was very clear that a knee jerk reaction would do more harm than good to the people/businesses of Indiana. It’s not sufficient to simply do something, we must be attentive to HOW we respond and the sorts of collateral damage we might be causing along the way. Finger pointing and rash reactions (for instance, when I posted the above Star article on Facebook several commenters echoed the sentiment that ire should be directed solely at Indiana’s “homophobic government”) ultimately do not work in favor of the common good.

Torn between Angie’s list stance against RFRA and the setback it would cause day-to-day life in our neighborhood, I lamented the whole situation. There has been some speculation among neighbors on Facebook that Angie’s List knew that their deal was rapidly unraveling, and they shrewdly seized the opportunity to take a politically advantageous blow at the governor in the process, shifting the blame to him for the project’s undoing.  Who knows?

This unfolding story is a good reminder though of the virtues of Slow Church for how Christians think and act politically. First, as I noted above, we cannot operate from the logic of “by any means necessary,” as it will inevitably lead to casualties and often casualties among society’s most vulnerable.  Our politics must be embodied, not treating issues in the abstract, but being as attentive as possible to all of the real consequences of our political and economic actions. I appreciate the approach of corporations who have voiced their opposition, and are cautiously examining how they might respond.  Additionally, our politics must flow out of the the everyday realities of our neighborhoods. Lament, which feels the real pain of real, struggling women and men, is a much more effective and sustainable driver of political action than rage. Lament is not silence, indeed it makes the powers that be (governments, corporations, etc.) know that their actions have had painful consequences, and it leads us prayerfully and cautiously into wiser responses that are more than the instinctive sorts of returning evil for evil. 1

For our neighborhood, it’s back to the drawing board.  (Angie’s List hasn’t completely ruled out their expansion, just ruled out taking state funding to make it happen.) We live here, we are committed to seeing this place flourish, and we are tenacious.  When working with the heavyweight powers that be, you inevitably will take a few blows on the chin, and you regroup, get back in the ring and keep fighting for the health of your place.  We can’t pretend like those blows don’t hurt though.

June 10, 2015 Deeper into Your Love and Compassion - A Slow Church Benediction.
Recent Comments
0 | Leave a Comment
"Every normal person wants to help those in need as we can.Church groups have the ..."
Bob Shiloh A Politics of Hope in the ..."
"Hi Abe; Are your mom and dad, Kath' & Tony? If so, then you have ..."
Steev Rush Garrett JPUSA: A Tragic History of Sexual ..."
"https://www.christianbook.c...One of the best books I've ever read!"
Nimblewill Reflecting On The Worst Christian Book ..."
"Yes...but I think you commented in the wrong post. ^^;;"
The Mouse Avenger Remembering Mr. Rogers.
Browse Our Archives
Related posts from Slow Church