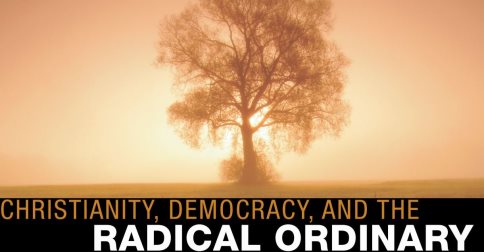 In the wake of the recent US presidential election, I’ve been drawn into a few efforts to re-imagine what faithful Christian politics might look like. These efforts have compelled me to start re-reading Stanley Hauerwas and Romand Coles important book: Christianity, Democracy, and the Radical Ordinary: Conversations between a Radical Democrat and a Christian (Cascade Books, 2008 — This book was featured recently on a list of recommended books on cultivating Christian faithfulness in the Trump age that I compiled for The Englewood Review of Books.)

In the book’s introduction, I encountered this compelling passage that I wanted share and unpack here…

[We think hope] lies in the emergence of a multitude of peoples enacting myriad forms of the politics of the radical ordinary in ways that, first, displace and relocate our human efforts to tend to each other in our commonalities and differences away from the megastate and corporate power; and, second, struggle (with intransigent suspicion) to radically transform these powers – where we cannot entirely displace them – so as to make them increasingly responsive to the pressures of people cultivating knowledge, power, and hope through relationships of everyday attentive reciprocity.  We think that it is most vitally in and through concrete practices of tending to one another that people find the sources of renewal and sustenance for a life-affirming politics – one that provides the most hopeful wellspring for defeating the politics of death. The politics of death is a dense, dynamic, and finely woven mesh of destruction and fear. An alternative politics that cares for the commonalities, differences, and emergent irregularities of life must also be dense, molecular, supple, mobile, and trickster-like in its modes. It must maintain its “heavy foot” in the complexities of the radical ordinary – in the memories and specificities of what is found there – if it is to avoid the fantasies of “seeing like a state” and of “being like a Wal-Mart,” fantasies that not only threaten us but that are already plunging us into the new dark ages.

Hope lies in the local, and everyday sorts of ways that we care for our real flesh-and-blood neighbors and for our polis (place). These are where our politics must begin, and especially in an age in which the governance of the nation-state has been consumed by those driven by agendas of greed and deceit (and I would argue that this characterization would be true not only of Donald Trump, but also of Hillary Clinton, had she won the election.)

As John McKnight elegantly argued in his provocative book,  The Careless Society, we have outsourced our care of one another, and particularly our care of our most vulnerable neighbors to the state and to corporate interests (e.g., the healthcare and mental health systems). The sort of care that should undergird our politics efforts must be that which moves us away from state/corporate care toward more direct and personal expressions of care.

everyday: Focusing our political energies on 2- or 4-year election cycles is not enough, neither is a monthly cycle of neighborhood meetings, or even — dare I say it — the weekly cycle of church services. Our politics needs to be rooted in the everyday sorts of ways that we care for the real people in our churches, families, and neighborhoods.

attentive: True care comes out of attentiveness, not doing things FOR people because we think they need/want it, or even simply responding to stated needs, but rather attentiveness to full embodied witness of a person, what does their situation require for them to be moving toward full participation in healthy and sustainable community life (Wendell Berry’s extraordinary essay “Health is membership” come to mind here).

reciprocity: Care happens best when it flows mutually within the context of relationships. Returning to John McKnight’s The Careless Society, he emphasizes there that our relegation of care to institutions has changed the dynamics of care such that it primarily flows in one direction, from those who have the resources and will provide the care to those who need the care. In Slow Church, John and I have emphasized that an economics that reflects the abundance of God’s creation will flow from the practice of hospitality, in which our generosity takes the shape of creating spaces in which care can flow in reciprocal ways.

the complexities of the radical ordinary: Politics in the ways that I am beginning to describe it here immerses us fully in the messiness of our broken existence as humans. Politics rooted in everyday attentive reciprocity is costly discipleship, not just giving lip service to loving our neighbors, but truly and actively loving our neighbors within the ever-present minefields of their brokenness and our own brokenness. Our politics — and particularly at the national level — has been so abstracted from the daily struggles of real human beings that there is little wonder that it has been co-opted (on the Right and the Left) by the economic interests of the marketplace. Our politics is best when it flows from daily rhythms of caring and being cared for.

the fantasies of “seeing like a state” and of “being like a Wal-Mart”:  I suspect that Hauerwas and Coles’s intended meaning is more complex than this, but there is little discussion in present-day politics of the ways in which our own personal and tribal imperialisms shape our political engagements. We need to recognize, confess, and repent of these fantasies, and the fragmentation that they have wreaked and continue to wreak on public life, and particularly so as Christians who confess that Jesus is Lord, we need to stop acting accordingly to fantasies of wealth and power in which we imagine ourselves as Lord.

And so, these are the building blocks of a new sort of politics, one in which our local churches are well-suited to lead the way (if we are attentive to our discipleship in the Way of Jesus, and to the calling to be a contrast society as the people of God with alternative visions of politics and economics).  You will undoubtedly hear more from me in this vein, as I continue to read this book and reflect on the unsettling situation in which we find ourselves today.