Taking Up Our Crosses, Injustice, and Abuse (Part 3 of 3)

Taking Up Our Crosses, Injustice, and Abuse (Part 3 of 3) September 9, 2021 Herb Montgomery

So what did Jesus mean, then, when he said “take up your own cross?”

First, Borg and Crossan correctly remind us that Jesus’ cross in the gospels was about participation, not substitution:

“For Mark, it is about participation with Jesus and not substitution by Jesus. Mark has those followers recognize enough of that challenge that they change the subject and avoid the issue every time. (Marcus J. Borg and John Dominic Crossan. The Last Week: What the Gospels Really Teach About Jesus’s Final Days in Jerusalem; Kindle Locations 1589-1593)

While I agree with Borg and Crossan about the theme of participation rather than substitution, I disagree with their interpretation that suffering on a cross was intrinsic to following Jesus, and I don’t subscribe to the idea that suffering is an intrinsic precursor to triumph or success. Suffering only enters the story of following Jesus if those benefitting from the status quo feel threatened by changes that Jesus’ new social vision would make, and threaten his followers with a cross. Being willing to take up one’s cross is not a call to be passive in the face of suffering, but a call to protest and resist even in the face of being threatened with a cross.

“Taking up one’s cross” in this context means being willing to endure the results of disrupting, confronting, resisting, and protesting injustice. The cross in the Jesus story is a symbol of the state violence that those in power threaten protestors with to scare them into remaining passive. Remember, as Carlson Brown and Parker wrote, the question is not how much am I willing to suffer, but how badly do I want to live!

If those in power threaten you with a cross, then and only then it becomes necessary for you to “take up a cross” and stand up against injustice. Protesting, for instance, does not always involve being arrested, but if it does, protest anyway!

The goal in scenarios like these is not to suffer, but to refuse to let go of life.

How one interprets taking up one’s cross has deep implications for survivors of relational violence, and for all who are engaging any form of social justice work. When those who feel threatened try to intimidate and silence your voice through fear of an imposed “cross,” this week’s reading calls us to count the cost and refuse to let go of life. Do not be silenced! Though it may sound like an oxymoron on the surface, speaking out in the face of a threat is a form of rejecting death.

Too often, Jesus’ teaching of taking up the cross is interpreted so that the abuse itself is the cross.

But the abuse is not the cross but an initial injustice, and the cross is the threats one receives for standing up to or resisting injustice. 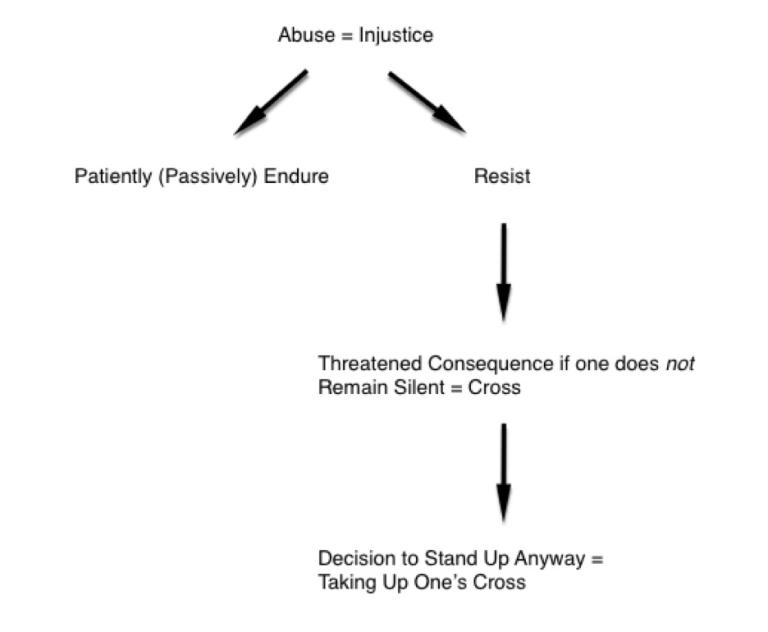 Jesus is encouraging his followers to resist as he did flipping tables in the temple courtyard, even though it resulted in the state violence of a cross.

If a cross comes into the picture, then resist anyway. Jesus’ nonviolence was rooted in resistance, and sometimes change happens before oppressors send a cross. At other times, change happens after the cross. In both cases, suffering may come, but it is not redemptive.

Jesus emerged in his Jewish society as someone calling for the just distribution of food and land and the inclusion of those presently marginalized. His way of structuring human community threatened imperial Roman society and those who most benefited from the Roman system. And the early Jesus movement that grew out of an encounter with this Jesus resulted in a way of doing life together that was also seen as a threat to those in positions of power and privilege.

When those in power choose to threaten crosses for those standing up to systemic injustice, don’t let go. Keep holding on to the hope of change even in the face of impossible odds. Keep holding on to life! For, Jesus says, what does it profit if you gain the whole world by your silence and yet lose your humanity?

Whoever wants to save their life through remaining silent in the face of injustice will actually be letting go of life. But whoever is willing to fight for life, for equity and equality, for love and compassion, for inclusion, for a just and safe world that is home for everyone, even if you’re threatened with death and death-dealing for doing so—all who refuse to let go of life and those things that are life-giving are the ones through whom life is saved, life is found, and another world is not only seen as possible but created in those moments of refusal. 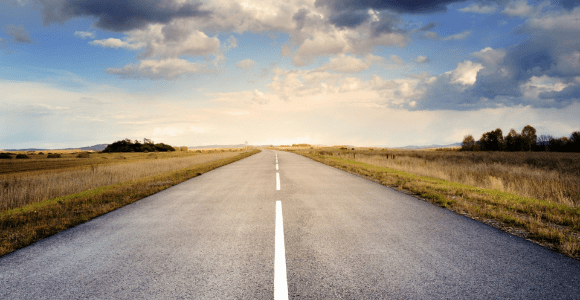 Evangelicals, I've Got Some Questions For You
American Evangelical Christianity is where I come from, but it's no longer...
view all Progressive Christian blogs
Copyright 2008-2021, Patheos. All rights reserved.