Scot McKnight’s A Fellowship Of Differents

Scot McKnight’s A Fellowship Of Differents May 7, 2015 Jack Levison

What happens when you cross a top notch New Testament scholar, a genuinely funny guy, and a former fundamentalist?

You get Scot McKnight, who has ample skill to imagine the world of the New Testament (that’s the scholar part), who can happily compare the church to a salad (that’s the funny guy), and who can relate to many of his readers by talking frankly about his upbringing in a conservative church—though without rancor (that’s the former fundie). Scot McKnight is a one-of-a-kind author who has tested his mettle in the world of scholarship, who addresses worldwide audiences, who loves life with his students, who rarely accepts invitations to speak if his wife Kris isn’t invited, and who tells a great joke.

Let’s get one thing straight. McKnight’s not a recovering fundamentalist. He tells us, right off the bat, about his first experience of preaching, how he “went on and on, until about an hour later ‘Pastor Dave,’ our youth lea 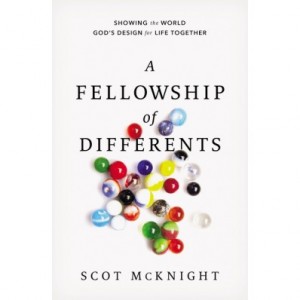 der, told me to knock it off, and I sat down among my glassy-eyed peers” (9). I take it, from this story, that he still appreciates his upbringing in the First Baptist Church in Freeport, Illinois, which “was about four things: getting people saved, separating from the world, singing full throttle, and listening to sermons by our pastor—though certainly not in that order” (10).

I met Scot McKnight a few years ago late in the day after endless papers and wall-to-wall conversations at the American Academy of Religion/Society of Biblical Literature meeting. I was exhausted—until I’d spent fifteen minutes with him. We talked about baseball, of course. (I’d lived in Chicago, where Scot lives, and learned to mourn the Cubs.) We talked about North Park University, where we’d both taught, though at different times. And we talked about the holy spirit—lots about the spirit and God and Jesus. By the time we’d finished talking, I was full of energy borne of fascinating conversation and plenty of laughter.

Reading A Fellowship of Differents is like sitting down with Scot after a long day and finding yourself surprisingly revitalized. Like Scot, the book moves quickly—and deftly—between anecdotes about friends, reminiscences about students, insightful interpretations of New Testament texts, and quotes and quips from modern (or fairly modern) authors like Henry David Thoreau, C. S. Lewis, Ralph Ellison, author of the 1953 National Book Award winner The Invisible Man, Dietrich Bonhoeffer, Anne Lamott, Kathleen Norris, and Flannery O’Conner.

The point of the book lies in “getting the church right.” What does McKnight mean by this? The church is “God’s world-changing social experiment of bringing unlikes and differents to the table to share life with one another as a new kind of family” (16).

Hence, the salad metaphor. There are three ways to eat a salad.

That’s how to understand the gist of A Fellowship of Differents.

If it’s true, as McKnight tells us, that “90 percent of American churches draw 90 percent of their people from one ethnic group, and only about 8 percent of American churches can be called multiracial, multiethnic, or interracial” (20), then we need this book. And we need it the way McKnight delivers it, with humor, appreciation, and a drizzle of critique. He doesn’t make us defensive; we don’t cross our arms and lean back. He gives us just enough—data, story, joke, tale, commentary—and then changes the tack, though never the subject, which is always about the essential qualities of a diverse church.

A Fellowship of Differents does have an order to it. It contains sections on grace, love, table, holiness, newness, and flourishing. But that doesn’t define the book at all. What defines it is McKnight’s casual, inoffensive, funny approach to those of us who are comfortable in American Salad or Weird Salad Churches.

So don’t be fooled by the jokes he tells or tales he spins. This book is a deep challenge to the way we do things in American Christianity written by someone who is anything but dim-witted.

And don’t be surprised if, in the reading of this book, you squirm, you question—you change. You may discover in a story, McKnight’s take on scripture, or a description of a tomato, even (86),  something that prompts you to imagine the endless possibilities of life in a fellowship of differents.

February 25, 2015
When Will the Untold Stories End? Another Entry for Black History Month
Next Post