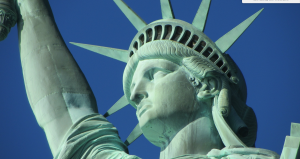 What’s the most cherished verse of the Bible? For many Christians, it has to be John 3:16: “For God so loved the world, that he gave his only begotten Son, that whosoever believeth in him should not perish, but have everlasting life.” It’s so popular that it has season tickets to sporting events. If you watch football, you’ll see it, with its own placard, right there behind the goal post: JOHN 3:16. (I didn’t happen to see it at the Super Bowl, but I bet it was there, in one heck of an expensive seat.)

Today I’ll recommend that Christians memorize another 3:16 verse of the Bible: Exodus 3:16.

Why Exodus 3:16? Because it speaks to the heart of American politics. More important, it shows us the heart of God.

God and Moses are in an intense conversation about the plight of ancient Israel, in the course of which God confesses, “I have heard them crying out because of their slave drivers, and I am concerned about their suffering. So I have come down to rescue them from the hand of the Egyptians and to bring them up out of that land into a good and spacious land, a land flowing with milk and honey” (Exodus 3:6-9).

As if Moses might have missed it, God says a second time, “And now the cry of the Israelites has reached me … and I have seen the way the Egyptians are oppressing them. So now, go. I am sending you to Pharaoh to bring my people the Israelites out of Egypt” (Exodus 3:9-10).

Then a third time, in Exodus 3:16-17, God says it again: “Go … I have watched over you and have seen what has been done to you in Egypt. And I have promised to bring you up out of your misery in Egypt into … a land flowing with milk and honey.'”

If repetition is a clue to commitment, then we see deep into God’s heart here.

Third time’s a charm, isn’t it?

Not for everyone. Here’s the kicker–and what’s got me worried.

About 8 chapters and 10 plagues later, it’s not the Israelites who cry out–but the Egyptians. There is “loud wailing throughout Egypt–worse than there has ever been or ever will be again” (Exodus 11:6). That word, wailing, is the same Hebrew word as cry in Exodus 3:7. Only now it’s the Egyptians rather than the Israelites, the powerful rather than the poor, who cry out.

The story continues: “Pharaoh and all his officials and all the Egyptians got up during the night, and there was loud wailing in Egypt, for there was not a house without someone dead” (Exodus 12:30). Wailing? You guessed it. The same Hebrew word as cry in chapter 3.

Again, here’s a transfer of power from the rich to the poor, and a transfer of wailing from the poor to the rich. It’s nothing short of a great reversal.

So what’s got me worried? The state of the refugees, of course. I want God to rescue them and lead them to a land flowing with milk and honey.

But I’m worried about us, too, because I know, biblically speaking, what happens to nations on the wrong side of the equation. Nations that fail to pay attention to the miserable, to “your tired, your poor, your huddled masses yearning to breathe free, the wretched refuse of your teeming shore,” end up, in the biblical economy, as tired and poor themselves.

You see why Exodus 3:16 has me worried? If there is a God–and I am a Christian who believes there is a God–then it may be that America’s refusal to allow even a modest flow of refugees on our shores will prompt a transfer of wailing, a resettlement of misery from the refugees to citizens of the most powerful nation on the face of the earth.

I worry about a great reversal.

So I’m not at all opposed to John 3:16. I’ve got it memorized. But there are other verses, other parts of the story, other chapters of the Bible worth memorizing.

And Exodus 3:16 is one of them. Exodus 3:16 reminds us that God watches out for the wretched, tempest-tossed. And it cautions us about being on the wrong side of things when God pays attention to the cry of the miserable.

So I worry. What Bible-reading Christian wouldn’t?

Quotations of the Bible are from the King James Version (John 3:16) and the New International Version (Exodus).

The quotation about huddled masses is from the base of the Statue of Liberty.

February 17, 2017 The Cross and the Old Testament (with a little help from NT Wright)
Recent Comments
0 | Leave a Comment
"Praise God from whom ALL blessings flow..!! Praise Him all people here below..!! Praise His ..."
wsurfs . Pentecost for the Rest of Us
"my dad went to that university when it was still a college"
Brandon Roberts Seattle Pacific University as Our Place ..."
"sad that this stuff keeps happening"
Brandon Roberts After the Shooting at SPU: Consolation, ..."
"nice"
Brandon Roberts Can o’ Corn! A Simple Practice ..."
Browse Our Archives
get the latest from
Progressive Christian
Sign up for our newsletter
POPULAR AT PATHEOS Progressive Christian
1

'Thou art the man'
slacktivist
Related posts from spiritchatter