The Cross and the Old Testament (with a little help from NT Wright) February 17, 2017 Jack Levison

In 1978, it became clear to my director of studies at Christ’s College—a little-known, shy, heavily-bearded young Anglican theologian named Rowan Williams—that I had no clue about how to take a Cambridge University tripos examination in theology. That’s not quite right. I knew how to take it. I just didn’t know how to succeed in it. 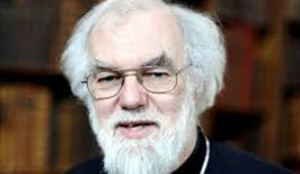 So Rowan Williams sent me to the equally young chaplain of Downing College, Cambridge, a New Testament scholar named N. T. (or Tom) Wright. Tom painstakingly led me through the process, including how to write a “gobbet.” “‘A gobbet’ is a small piece of something, like a bit of gum. On the exam, it is a quote, typically from the Bible, and you have to comment upon it,” he explained. “You do this by noting its context, key words and themes, and related texts.” I made it through the exams, even managed to succeed. 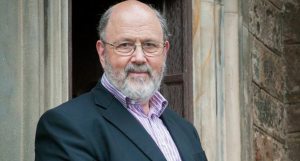 For a few decades, Tom and I saw each other only occasionally. Then in 2012 he wrote a lovely endorsement for my Fresh Air: the Holy Spirit for an Inspired Life, and we reknit our friendship, this time not as faculty and student but as peers (if anyone can be Tom’s peer).

Tom asked me if I would read the manuscript of a book he had written. He wanted honest critique. I dished it out, and he asked for more. Over the course of a couple of months in early 2016, Tom and I traded emails bulging with my bald criticisms and his responses. The book became The Day the Revolution Began: Reconsidering the Meaning of Jesus’s Crucifixion.

At about the same time, Alyce McKenzie asked me to teach a class period on the atonement. Perfect! Providential, even. I had found myself puzzled and challenged by Tom’s approach to Jesus’ death and now had the chance to float my ideas in the collegial context of a class of bright and engaged Perkins School of Theology students.

Here is the gist of what I taught.

Many of us see the crucifixion of Jesus as a problem. It’s so violent. Well, violent or not, it happened. And it was violent. You can avoid all of that, pretend Jesus didn’t die violently. But he did. So we have to deal with it.

How do we deal with it? How do we understand his death? In terms of three images from Romans 3:21-26, especially verses 24-25. Jesus’ death was a justification, a redemption and a propitiation.

In order to understand these incredibly thick words, I’ve typically led students to the agora—the marketplace—at Corinth, which I visited as a college student. (Paul may have written Romans from Corinth.) With a 360 degree turn, Paul could see the bema (high place), the slave market, and the temple of Apollo. 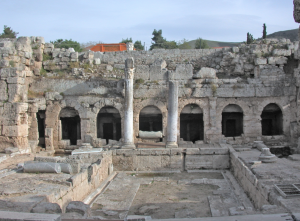 There you go. Neat and tidy. Even as I write this now, I think it may be right. A simple 360 degree turn, and the mystery of Jesus’ death becomes clear to us through everyday Corinthian sites.

But Tom Wright challenged me to look elsewhere as well. Tom also put these three images into Israel’s storyline, such as we discover it in the Jewish Bible and Christian Old Testament. Tom interprets the death of Jesus in light of pivotal moments and places in Israel’s history:

That’s the gist of Tom Wright’s take on the cross. Not the whole of it–but the gist. The proper context for interpreting the death of Jesus is the Hebrew Bible or Christian Old Testament–and not principally passages on sacrifice. If you want more, you’ll have to attend Crosstalk at SMU’s Perkins School of Theology on Monday (call Sabina at 214-768-2124 and beg for late registration) or pick up a copy of Tom’s book. Both will be worth your while.

Photo of Rowan Williams from yale.edu. Photo of NT Wright from Religious News Service. Photo of Corinth from gotravelaz.com.

March 4, 2017 The Detritus of Dreams
Recent Comments
0 | Leave a Comment
"Praise God from whom ALL blessings flow..!! Praise Him all people here below..!! Praise His ..."
wsurfs . Pentecost for the Rest of Us
"my dad went to that university when it was still a college"
Brandon Roberts Seattle Pacific University as Our Place ..."
"sad that this stuff keeps happening"
Brandon Roberts After the Shooting at SPU: Consolation, ..."
"nice"
Brandon Roberts Can o’ Corn! A Simple Practice ..."
Browse Our Archives
get the latest from
Progressive Christian
Sign up for our newsletter
POPULAR AT PATHEOS Progressive Christian
1

Meet the creepy men behind the...
slacktivist
Related posts from spiritchatter