The Summer of ’17: the Amazing Disappearing Man!

When I was a kid, my older sisters would say, “He’s useless.”

No. That’s not quite right. They were exasperated, so they’d sigh, “He’s use-less. MOM!”

That’s better. No doubt I was the useless younger brother of two older sisters.

I probably still am. Both of them are nurses, who have spent hours upon hours actively helping people in need. Me? I teach and write and hang with students—and quip, “I’m the wrong kind of doctor. I’m the useless kind.”

That’s what this week’s summer together podcast is about: the amazing disappearing man.

Just take a gander through the story of Isaac’s life: 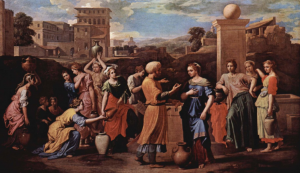 Thank goodness his servant meets Rebekah in a story that can’t really be paraphrased or summarized. Genesis 24 has to be read—and read slowly—to be savored. It’s full of twists and turns and plenty of laughs, if you know where to look.

So off she goes with Isaac’s servant.

As she draws near to her new home, there is Isaac out in the field one evening. He looks up and sees camels coming. Wouldn’t you expect him to do something? After all, his father Abraham would get up in the morning and do whatever needed to be done by dawn.

And ran to them? Nope.

And greeted them? No.

And at least wondered who was riding them? Not at all.

Isaac looked up, saw camels coming—and the next verb belongs to Rebekah.

Now Isaac had come from Beer-lahai-roi, and was settled in the Negeb.  Isaac went out in the evening to walk in the field; and looking up, he saw camels coming. And Rebekah looked up, and when she saw Isaac, she slipped quickly from the camel. (Genesis 24:62-63)

Slipped quickly is putting it mildly. This Hebrew word, when you first meet it in your introductory grammar, is translated, fall.

Rebekah dove off her camel.

And then she did what Isaac rarely did. Her curiosity piqued, she asked a question: “Who is the man over there, walking in the field to meet us?” (She’s giving Isaac more credit than he deserves—or maybe he was, at last, walking toward them.)

That’s pretty much the gist of the relationship between Isaac and Rebekah. We learn in Sunday school about Abraham, Isaac, and Jacob, and that’s true enough when we are talking about Israel’s patriarchs. But look at the verbs, note the activity, how the story runs through Rebekah. The story-line is really Abraham-Rebekah-and Jacob.

Rebekah, whose brother deferred to her.

Rebekah, whose husband deferred to her.

Rebekah, whose sons deferred to her.

If you want to talk about women’s roles or male leadership, then stay away from the stories about Rebekah in Genesis.

Don’t even glance at them.

Because the story in this week’s podcast is about an amazing disappearing ancestor and his extraordinary wife.

Or, better yet, it’s about Rebekah and her Amazing Disappearing Husband!

Photo: Eliezer and Rebecca at the Well by Nicolas Poussin, 1648

July 13, 2017 Summer of '17: Sibling Rivalry on Steroids
Recent Comments
0 | Leave a Comment
"Praise God from whom ALL blessings flow..!! Praise Him all people here below..!! Praise His ..."
wsurfs . Pentecost for the Rest of Us
"my dad went to that university when it was still a college"
Brandon Roberts Seattle Pacific University as Our Place ..."
"sad that this stuff keeps happening"
Brandon Roberts After the Shooting at SPU: Consolation, ..."
"nice"
Brandon Roberts Can o’ Corn! A Simple Practice ..."
Browse Our Archives
Related posts from spiritchatter