When You Find Yourself in a Congregation of One

When You Find Yourself in a Congregation of One August 1, 2017 Guest Contributor

I live in Columbia, S.C. where my family has been actively involved in Jewish life for several generations. Thirty years ago, when I told them about my Christian resolve, they reacted with swift antagonism. I had crossed an intangible cultural divide dishonoring the memory of my grandparents and every generation preceding them. I recall Dad’s telling response: “At least if you were younger, I could put you over my knee to punish you.”

Living in the same city as them, I guarded my privacy for fifteen years. While not a part of any organized religious structure, I cultivated a faith of my own and rejected cultural-war stereotypes. Not relating to conservative groups such as the Christian Coalition or Messianic Judaism, I came to view myself as “a congregation of one.”

My shocking radical turn, the most practical decision of my life, entailed breaking away from the only reality I had ever known, the collective conversation of which I was a part. It forced me to let go of expectation, ego, and the conventional wisdom of a lifetime. From the inside, I see my epiphany as a seamless progression of values and disposition, but for my loved ones, it remains a complete anomaly.

During the time my faith was incubating, I experienced crushing anxiety from conflict and indecision. Reflecting on how I came to resolve my doubts, I see a convoluted pattern of dissonance and renegotiation. I will always understand the Jewish sensibility—that of a minority group trying to protect itself. Paradoxically, as I contemplated leaving a civilization always on the edge of survival, pride in my identity became strengthened and chiseled, honed as if on a rough-edged stone. Without pretense, I can state that the Jewish mystique, with its timeless unfolding in the blood stream of history, is writ large upon my psyche.

Though my journey occupies the space between Judaism and Christianity, it will resonate with the  growing number for whom traditional sectarian categories do not apply. In 2015, the Pew Center Survey affirmed that an average of 35% have switched religions or disaffiliated from a childhood tradition.  Researcher Diana Butler Bass has found that many of those who leave the fold still retain spiritual  interests. All who seek transcendence outside the boundaries of traditional religion will benefit from the insights, techniques, and lifestyle changes that led me toward congruence.

The study participants in Marsha Sinetar’s book, Everyday People as Monks and Mystics, modeled insights, techniques, and lifestyle changes that resembled my own. Sinetar uses the terms “Monk” and “mystic” loosely to refer to all who hunger and thirst for God. Not malcontents or psychologically unhealthy, they simply engage life on their own terms and express sacred values important to their identity.

Sinetar uses the term “self-actualized” to define psychological wholeness. Because of its unending nature, one never finishes the journey. She describes two values within this umbrella–“social transcendence” and “self-transcendence.” No doubt, Jesus reflected both when he said, “Those who lose their life for my sake will find it.” (Matt 10:39) I began the process of letting go of secure ways and dying to my former self when I pulled back from acquaintances and activities that didn’t shape or fulfill my goals.

I practiced the presence of God without a sanctuary, attending to my inner life by reading, writing, praying, and meditating. I attained what the mystics call “joy”—a contentment richer and more profound than anything the world could offer. I cultivated a peace that transcended cultural boundaries, and I never experienced what one would call “loneliness.”

On a high wire, balancing faith, identity, and family dynamics, I held onto belief as one grasping an unwieldy oxygen tank. Though isolating and cumbersome, I kept it close because of the breath of life it provided. I lived on high doses of the Holy Spirit, something I liken to “libido for the soul.” It fueled my passion for Jesus and kept my life invigorating and purposeful.

After I moved through what Trappist monk Thomas Merton called the “wilderness period of existential crisis,” I proceeded down the path of wholeness in Christ. I meditated on the Bible, using the Catholic technique, Lectio Divina. I read small sections out loud and engaged with the text, focusing on transformation, not information. As I let its meaning seep into my heart, mind, and soul, I developed an attitude of knowing that I had nothing to prove and nothing to gain, except intimacy with God. To quiet my desires, I reflected on the passage, “Be still and know that I am God” (Psalm 46:10).

In 1654, Pascal wrote, “All of humanity’s problems stem from man’s inability to sit quietly in a room alone.” Mindfulness through meditation helped me still the cultural noise that stymied my creativity. When my mind wandered, I learned that the simple act of reining it in improves my brain function. Like grace, I couldn’t go wrong.

Several years into my commitment phase, I began the practice of journaling. Though rigorous and punishing, it helps me to process confusing thoughts and emotions.

As my religious identity shifted, writing, as a form of narrative therapy, helped me to move past psychic dissonance. By framing my story as a coherent whole, I could connect my past, present, and future—drawing from ways I had experienced and interpreted my world.

For example, despite having moved away from theological Judaism, it remains the dominant narrative in my life. I continue to align myself with an oppressed, marginalized culture because I want to witness, honor, and respect that part of me. My experience of anti-Semitism, for example, forged the character and resilience that define me today.

As a form of communication, writing resembles prayer. It reaches deep into my psyche and speaks to a subconscious part of my soul. On a recent morning, for example, looking out of my window, I noticed the difficulty of pinpointing the precise moment darkness edged into the light. In putting pen to paper, I realized that the stages of my life may have been discerned this way—after the fact, and then, only subtly.

This led me to see that my conversion evolved, not from a single illumination, but from many incremental points of light. My resistance to faith wore down when I studied the Jewish roots of Christianity. By conceptualizing myself as a first-century Jewish believer, I lived in a world of my own understanding, apart from rigid cultural and religious stereotypes. 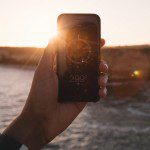 April 5, 2017
Is my iPhone Sacred? Secular Ritual & the things that Matter
Next Post

August 4, 2017 The August Lunar and Solar Eclipses - A Message from the 12 Archangels
Browse Our Archives
get the latest from
Spirituality Itself
Sign up for our newsletter
POPULAR AT PATHEOS New Visions
1

New Visions
Journaling as a Path to Your Spirituality
Spirituality Itself

Singing in the Face of Days
— dhikr in Islam, japam in Sanskrit, witness in English: the repetition...
view all New Visions blogs
Copyright 2008-2020, Patheos. All rights reserved.