Give Muhammad a Chance 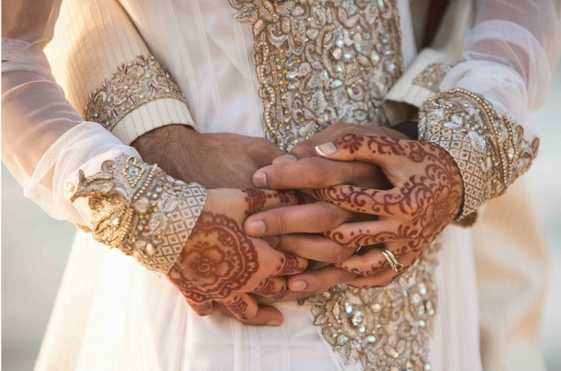 Eight years into our marriage, it still sends little shock waves through people when I mention this. There are sometimes oooohs and aaahhhs, eyes get bigger and rounder, and I can almost see folks wanting to high five me and slap my husband on the back for biting the bullet and marrying an older, divorced, single mom.  I have, no joke, been asked at least a dozen times how I managed to pull this off.

But a decade ago when he proposed to me, I didn’t bounce off the walls. I advised him to speak to his elders and family, which he did. I was mature enough to know that marrying into a South Asian family meant actually marrying the family, and without their blessings there would likely be no blessing in the marriage.  So he dutifully approached his parents, armed with the story of Khadijah (ra) and Muhammad (saw)**, confident as an aalim and haafiz Quran himself.  They took the news fairly well, asking for time to think. Istikharas were had all around and the green light came about a month later, at which point his mother called my mother.

My parents, who I assume had little hope that I’d remarry because they never brought it up, were amazed. Amazed that I found somebody on my own when plenty of my single friends couldn’t.  Amazed at the courage of his family in the face of cultural stigmas. Amazed at this brave young man who, never married before himself, would be willing to take on a divorcee and responsibility for her child.  All things that, by many measures, are probably greatly admirable.

Except at the time, and even now years later, I didn’t feel that way.  While the messages came hard and fast that I had landed a major coup, I was thinking “no actually, the coup is his”.  And for good reason.

Like most of us, I grew up having been taught a few major lessons from the story of Khadijah (ra) and Muhammad (saw).  One, that Muslim women can independently and of their own choice propose marriage. Two, other than puberty as a starting point, there are no age barriers for Muslims marrying.  Three, our beloved Prophet (saw) was man enough, confident enough, and humble enough to marry an older woman.   We see these themes repeated as our poor scholars, even today, entreat the brothers to marry older women (not even women older than themselves, but women who happen to be in their 30’s instead of their 20’s).

There is no denying the framework of this narrative, encapsulated beautifully here in an excerpt taken from a piece titled “She’s Not Damaged Goods, We Have Damaged Standards”:

It is extraordinary, awe-instilling, incredible, beautiful, and bold that a man like Muhammad (saw) married Khadijah (ra).  Except that it’s not. The story of their marriage, to me, is the story of a wealthy, noble, independent, admired, and apparently beautiful woman from an elite socio-economic class who gave a young man a chance.  A young man who, at the time, had little to his name but his character and reputation.  Granted he came from a respected tribe, but as an orphan his status in society was shaky.  He lived under the protection of his grandfather and uncle. He was employed by Khadijah, and like any employee, he presumably answered to his boss. Whether 1400 years ago or today, any reasonable understanding of the situation would be that it was Khadijah who was in the position of being able to marry anyone of her choosing.  At the time of the marriage, Khadijah (ra) was the prize, not Muhammad (saw).

I truly appreciate the attempts by our scholars and others to cultivate the will and interest of younger men in marrying older women, but I just want to push back a little on how this is being framed.  In assuring them of the gallantry of such a decision, that there is no disgrace in it, that it’s a noble sacrifice, that it doesn’t make them less manly, we almost seem to be reinforcing all of their hesitations. This script needs some flipping. 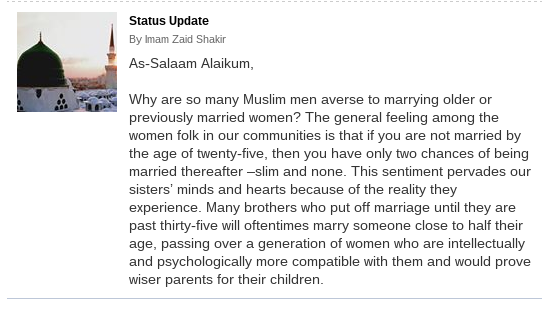 From where I stand, and stood a decade ago, Muhammad*** didn’t give me a chance. I gave him a chance.  He was still studying, I was a licensed attorney.  He owned no property and had no wealth, but I knew my sustenance was written so didn’t pay attention to that. I knew how to run a household, balance a checkbook, cook for over a hundred people, write a resume, raise a child, network with new people, and essentially be an adult.  He was on the verge of learning all of those things.  Which he did.  Initially I supported us financially, and after a while he took the reigns and has held them since.  I introduced him to pad thai and sushi, foreign films, kathak dance, parenting, qawwali concerts, foreign policy, and a world of ideas that a 21 year old me could never have.  He found me in my prime, while I found him in the beginnings of his maturity.****

When I imagine the scene in which our Prophet (saw) ran home in terror after Gabriel’s first visit (ra), and how Khadijah (ra) covered him, I see a certain dynamic. I see the dynamic of Khadijah being his rock and his stability, I feel his need for her, not her need for him.   Of course, as we all know, the chance that she took on him was repaid to her in this world and the next in ways she could have never imagined.  Not only was he a loving, kind, faithful husband in the first 15 years of their marriage, he remained so even after Prophethood.  After her death, she remained in his heart.  I’m sure it had to do not only with her being a wonderful wife, but the fact that she had married an orphan with nothing to his name, supported him and helped him grow, even though she could have married any man of her choice.

And so I say to my brothers, don’t despair.  There is surely a Khadijah out there for you.  Surely there are women who bring with them worlds of understanding, maturity, intelligence, who can advise you from a place of experience, who will be patient with you as you grow.  It may seem like you have little to offer a woman who is established, but there are women who are willing to give a young man the support he needs to reach his potential.

And ladies, I ask you to please, don’t overlook the young men who may be struggling with studies, with finances, who may not have a house or even a car, who don’t necessarily have all the material trappings or the pedigree of a dream husband.  Don’t let it feel beneath you to marry such a man, let your maturity guide you to what’s important in a human being – character, faith, kindness. The lesson of Khadijah (ra) for us should be this: give Muhammad a chance. You never know what he’ll become with you by his side.

*It was only as I was writing this that I realized both my husbands were 26 when I married them.  I may need a therapist to figure that one out.

***My husband’s middle name is actually and in fact Muhammad. Win!

****This is not to suggest he didn’t bring his own set of gifts to the marriage. He did, and in fact he brought things that an older man could never have.