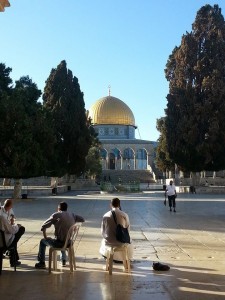 People connected to me on social media, and in my own personal life, know that I’m in Jerusalem right now, as I was last summer.  There is much to share about this experience, and many have asked me to write about it, but first I have to begin with a confession about how I got here for which you’ll have to stay with me through the end of this piece. In the coming weeks I’ll write substantive pieces about what I’ve learned.

Early last year I was invited to be part of a groundbreaking pilot program for Muslims to study Judaism in Jerusalem, sponsored by a private educational institute.  My immediate and visceral reaction was no, never, absolutely not.  I was never raised an anti-Semite, but have always been a committed anti-Zionist*. I marched in dozens of anti-Israeli protests, confusing my little girl who thought we were chanting “free, free Pakistan” instead of Palestine. I joined Al Awda, a Palestinian right to return organization and was that not-so-bright young woman in bandana and flip flops protesting outside of the Holocaust museum in Washington, DC (go ahead and cringe, I’m cringing too). Like most other Muslims I found the state of Israel reprehensible.

So there was NO WAY I was going on this trip. Or so I thought.  Which is what I did. I consulted with mentors, prayed about it, connected with others who were invited, got assurances from some prominent American Muslim leaders, thought about the potential of learning Judaism from an institute that teaches Rabbis and educators and the strategic value of the curriculum vis-a-vis helping the Palestinian cause.  After a couple of months, I accepted the invitation. It helped that people I trusted very deeply were involved in the program, and it was organized by Imam Abdullah Antepli of Duke University, a close personal friend and mentor. But to be very honest none of us really knew exactly what we were getting into.  We did know that our careers, our credibility, our friendships, our loyalties, all could be at stake.

Reflecting on it now, it’s not that surprising that I accepted the invitation.  Three years ago, after years of representing Muslim clients caught up in FBI and JTTF investigations and working on the issue from a civil rights perspective, I switched gears. I decided to engage directly with law enforcement and homeland security agencies on a federal and local level.  I had to find out exactly what was going on, why very problematic policies existed, and try to bring Muslim voices to the table on security issues. I could not do that as a civil rights activist. I had to do that as a partner and a bridge to Muslim communities.  Forcing everyone to recognize that we all essentially want the same thing, safe communities and a safe country, is at the core of this work.

At the same time, I’ve continued to stress the importance of civil rights activists.  In the presence of law enforcement and homeland security, I’ve told community members to always retain legal counsel before being interviewed. I always encourage mosques and communities to know their legal and civil rights before engaging with government. I’ve worked with CAIR and have been on the board of the state ACLU for many years. So while I agreed to come to Jerusalem, I support the work of BDS activists. These aren’t binaries or zero-sum games. These issues, like the Israeli-Palestinian conflict, cannot be resolved through a singular approach. We need some people to push, some people to pull, some to protest, some to partner, some to litigate, some to negotiate. I decided to work directly with the very agencies that have been at the core of many civil rights violations of American Muslims in order to help change those policies, and I agreed to be part of this program to learn both about Judaism as a faith to deepen my interfaith work, and about Israel and Zionism to learn about the group that I’ve been a lifelong opponent to.

This year has been a roller coaster. Deeply troubling at times, revelatory at times. Our program has included meeting many Palestinians, both in the West Bank and in Israel proper. We’ve engaged with Jewish academics, theologians, activists, Knesset members, settlers, artists.  We’ve been depressed, angry, elated, hopeful, hopeless.  Our instructors have been on a similar ride as us, many of them engaging for the first time with Muslims, being challenged repeatedly on the Palestinian issue, being forced to think and rethink their positions. Through this process they’ve been moved to the point of sharing what otherwise they would never articulate – acknowledgement of the devastation of the Palestinians at their hands and a need to atone.

The contradictions of this society can make your head spin. Israeli Jews in leading movements for Palestinian rights, Palestinians who prefer to stay in Israel even if a Palestinian nation is created, policies that prevent young Muslim men from praying Jummah at Aqsa but don’t control the khutbahs so the Imams are able to openly condemn the state, Jews and Muslims that know nothing about each other despite uncomfortably close quarters, overt racism and sexism in an ostensibly democratic state, extremely kind and faithful Jews who cannot seem to grasp the sin in which their nation was born, extremely kind and faithful Muslims who talk about wiping out the Jews without blinking, terribly unholy things happening on holy land.

Another contradiction worth noting is this – while a few people who learned about the program rushed to judge us in the worst way possible for being part of it, almost across the board the American Muslims and pro-Palestinian activists we’ve spoken to privately and in person have supported it, and many have asked to be part of it in the future.  There is a collective sense that other efforts have been tried for years and while it’s important to continue in those efforts, it’s time to test another alternative. Before coming numerous pro-Palestinian activists who learned of the program condemned us for agreeing to be part of it – but upon getting here every Palestinian we’ve met has thanked us for coming.

Finally, there is Al-Aqsa of course. Being in Jerusalem has meant rushing to salah as many times as possible in the blessed Haram al Shareef. I have yet to see Mecca or Madina, so the idea that I may get to spend dozens of salaahs at Aqsa, pray Jummah there, be present for Laliatul Miraj, or even see it once on my life, never seemed possible. It would be a lie to say that Aqsa was not on my mind as I agreed to this program. As someone who searches for meaning in everything, and seeks God’s signs in her life, it’s impossible not to see that in taking the tremendous risk of coming here, we were gifted the ziyaarat of Aqsa. What this means, I don’t know. But its simply the truth.

Those of us who decided to go out on a limb for this program realize its potential while acknowledging our limitations. No one is arrogant enough to think we will solve the Israeli-Palestinian conflict. Each of us accepted the invitation to be part of it for different reasons, and we are ending the experience with very different conclusions. But I hope and pray that Allah swt puts barakah in our efforts, and helps us to move the hearts of our partners to challenge policies that violate human rights, dishonor Jewish values in the name of statehood, and make peace even more improbable.

*Its hard to use words like Israel and Zionism.  Discussing with my colleagues, we agreed Zionist is to pro-Palestinians what Nazi is to Jews. But maybe worse.  Because of our deep emotional abhorrence to even some of the language on these issues, it’s become nearly impossible to talk about them rationally.  But as a community we’re at the place where we are discussing LGBTQ rights, interfaith marriage, females leading prayer, and many other subjects we simply could not address a decade or so ago.  Israel and Zionism are even harder to discuss, even though the other issues debate matters of fiqh and can effect our deen in a way that the Israeli-Palestinian conflict does not.  A colleague suggested this topic is harder to discuss, but at the same time so central to the global Muslim consciousness, because it exemplifies a global Muslim impotency and failure.  I’ll discuss this and other related conversations and lessons from my experience in future pieces.