If you are interested in learning about Thelema, where do you start? Aleister Crowley wrote prodigiously and his works can fill an entire bookshelf. Is there one book that can fill you in on the basic ideas? Here are three books to choose from to get you started on your reading and practice.

Dr. David Shoemaker has spent decades guiding students through the Thelemic version of the path of attainment. This book clearly explains the basic knowledge of ceremonial magic, including a concise overview of magical Qabbalah, along with core concepts of Thelema, the True Will and the Holy Guardian Angel.

The course describes daily practice and outlines how the journey can change over the years. Techniques include Thelemic versions of yoga, Tarot, alchemy, and sex magic. It’s more than just a magical primer, Dr. Shoemaker brings his experience as a Jungian psychologist to discuss how to apply Thelemic magic in daily life. For the beginner it is an excellent start while the experienced practitioner will find it a handy quick reference.

The Magick of Aleister Crowley, A Handbook of Rituals of Thelema

Earlier editions of this book went by the title The Magick of Thelema. Like Dr. Shoemaker, Lon Milo DuQuette has spent decades teaching Thelemic practice.

Both Thelema and Golden Dawn are sometimes described as ritual magic. This book describes the core rituals the systems hold in common, the pentagram and hexagram rituals, and then delves into specific Thelemic rituals, including the Star Ruby and the Mass of the Phoenix.

DuQuette is an entertainer, as a lecturer, as a musician, and as a writer. His clear instructions are illustrated with stories from his own experience, making this an accessible and enjoyable book.

You can catch up with what Brother Lon is doing here.

Magick in Theory and Practice

If you read only one book written by Crowley himself, this is a good choice. That doesn’t mean that it’s immediately readable. Hymenaeus Beta (Frater Superior of Ordo Templi Orientis) notes in his introduction to The Magick of Aleister Crowley that Crowley often asked younger students to explain the system to beginners because he understood “it’s the sort of thing I can’t do myself.”

Thelemic study groups led by an experienced practitioner often pick this one to read together. This is a good approach for an introduction to Crowley’s work in his own words. His language is Edwardian English, educated, dense, and often offensive – in fact deliberately so. Not only that, he sometimes wrote in code or symbolic language, not unusual in magic, but requiring a key to decode. It takes some time to develop the Crowley Filter translating what he says into understandable and useful information. When his work is not confusing or upsetting, it is knowledgeable, insightful, and deeply inspiring.

Any of these books can be read in a day and launch a lifetime of study. 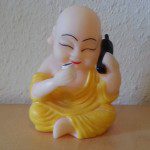 May 21, 2014 When Rose Kelly heard voices
Recent Comments
0 | Leave a Comment
"As a black person, this article was one of the worst theological takes I have ..."
Alex The Black Goddess Nuit
"One of the notions that I've used in thinking about American life and living in ..."
Pitch313 Charles Godfrey Leland, The Grandfather of ..."
"Thought this seemed like a good place to post about this:If anyone is looking for ..."
Joseph Feeley Six Ways My Catholic Upbringing Prepared ..."
"Yes."
Gordon Cooper Spring Will Rise Again
Browse Our Archives
Related posts from Star and Snake