Dead Can Dance is Alive with New Album, Dionysus

The album starts out on a windswept ocean shore and a docked ship creaking in the harbor.  Drums beat an infectious rhythm in the distant forest.  As you approach the drum circle and a crackling bonfire, a wild animal calls out.  Dancers clap to the beat, and the drums get more intricate.  Earthy strings resound in a chord, then another string instrument teases out a dancey melody. Just when you thought it couldn’t get any better, Lisa Gerrard’s mystical vocals intertwine with the music, creating an altogether otherworldly atmosphere.  It’s the new Dead Can Dance album, Dionysus.

As someone who has listened to Dead Can Dance since the 90’s, I really love how this album merges of sometimes disparate stylings of forerunners Brendan Perry and Lisa Gerrard.  There are no more solo songs, which are beautiful in their own right (like Wind that Shakes the Barley and The Carnival is Over), but don’t mix well in a band.  This separate-song style all goes away on this album.  Their styles have alchemized together to form a cohesive sound that’s better than many of their older songs.  Although Brendan is credited with bringing much of the album together, and Lisa assisted at the end with instruments and vocals, it feels like a true synthesis, more than most of their other albums.

Brendan has also been credited with the concept of Dionysus after reading Nietche.  The philosopher posited that there are two currents in the human world — the logical, action-oriented, Apollonian style; and the unconscious, mystical, spiritual, Dionysian style.  The album attempts (and achieves) a trance-like state more often than not.  Interestingly, the song marketed as the single (the Mountain, below) is my least favorite, though it has grown on me, even if the imagery in the video has not.

Sadly, it’s still unclear to me whether Dead Can Dance is pagan in any way.  Even after searching for insights on it for over an hour online, I had no direct answers besides the “pagan god influences” in the album.  Lisa called herself a Christian in the late 90s, and Brendan is remarkably silent on the topic.  However, Brendan has taken part in Dionysian-like ecstatic dancing and drumming, which may have contributed to themes.

While not that important to me that Dead Can Dance are pagan, I’ve always wanted them to be, since I like them so much.  I hear pagan elements in their music and feel the earth in their drum beats.  Their music is moving and magical.  It’s possible the musicians can’t express themselves in their restrictive societies, or maybe they’re afraid they’ll lose fans.  However, with the rise of pagan Viking music, they also have a lot to gain.  More people are out in the open, and it’s empowering.  Then again, maybe their spiritualities are more ephemeral than anything that could be encompassed in a label.  However, the pagan influence is clear on this album more than any others, and I am here for it.

The album is a little short for my tastes, but I appreciate that they had this great product and wanted to release it.  It’s possible that the shorter album cuts out the filler that many bands feel has to be added to make it a certain time or to have a certain number of songs.

The “songs” themselves flow together in two acts that feel different, but are strung together well.  Here’s a synopsis of the acts from Music Glue.

“ACT I – Sea Borne announces Dionysus’ arrival from the east by ship. This movement is crucial to understanding Dionysus as an outsider god – ‘the god that comes’ – central to Ancient Greek city religions that affiliate him with the protection of those who do not belong to conventional society, and anything which escapes human reason.

ACT I – Liberator of Minds, with Dionysus being known as ‘he who lends men’s minds wings’, the album’s second movement conveys the use of hallucinogens and mind-expanding drugs that are associated with him as well as breaking free from the constraints of social norms within society.

ACT I – Dance of the Bacchantes, invokes the rite that Dionysus’ female followers took part in, abandoning their domestic duties for trance-like processions and dances.

ACT II – The Mountain, the first movement of the album’s second Act, the listener will find themselves visiting Mount Nysa. This mountain was Dionysus’ place of birth, where he was raised by the centaur Chiron, from whom he learned chants and dances together with Bacchic rites and initiations.

ACT II – The Invocation represents the chorus who summon the god to participate in the harvest ceremony which also refers to his pre-eminence in the creation and birth of Greek theatre and tragedy.

ACT II – The Forest, the call to abandon worldly and material pursuits and return to a primeval enlightened state of being as in the Hindu tradition of Vanaprastha “departure to the forest” which is seen as the final stage in human spiritual development.

ACT II – Psychopomp, the final movement sees Dionysus in his role as a guide to the afterlife, where he escorted dead souls to Hades.”

This album is very enjoyable, whether one is driving in a car, dancing, or relaxing.  I anticipate I’ll be using some of the tracks in future fire dances.

What do you think of the album?  Please leave a comment below. 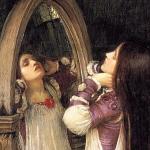 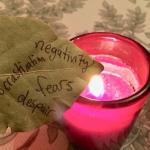 December 12, 2018 Bay Leaf Magic: Burn and Banish
Recent Comments
2 Comments | Leave a Comment
"I agree with many of the Comments here, but one more thing screams out to ..."
Falkenna The Inner Goddess Controversy: We Are ..."
"I gladly identify as an eclectic pagan. I like the word eclectic, both the implications ..."
Laurie Allen Is ‘Eclectic’ An Outsider Term? Rethinking ..."
"Sounds to me like just another way of saying "You don't belong here," which is ..."
Aisling Nua Chalian The Big Pagan Umbrella Covers Witchcraft ..."
"Given the unique, tight aspects, the planets involved and what's actually been happening on Earth; ..."
naadirasahra Could The Age Of Aquarius Start ..."
Browse Our Archives
get the latest updates from
Starlight Witch
and the Patheos
Pagan
Channel
POPULAR AT PATHEOS Pagan
1