I tried to call my mother at the tutoring co-op, and tell her to send the children home, which was stupid. There were two dozen families at the co-op; they’d have to keep all the children together and wait until the individual parents came to get their children. But of course, I called. It’s what you did during emergencies, before Facebook was invented. You made phone calls during emergencies, or you tried to make phone calls and jammed the lines. You knew you should hang up the phone, but you couldn’t. I held onto the old wall-mounted stretchy cord phone while I stared at the television, long after the woman at the tutoring co-op had hung up.

Then, after the phone call phase of emergencies, comes that odd, suspenseful combination of terror and something like monotony, the monotony you don’t want to admit to when your heart is pounding and your mouth is dry with fear. They kept showing the same images on the television, over and over again– the first tower smoking when the second plane hit, the reactions of people on the ground, the first tower collapsing in on itself smoothly, almost gracefully, as though it were turning from a solid object into a cloud. And of course, we all watched. It’s what you do, in an emergency. You want to get up, you want to get away from the television, but you can’t, because it’s an emergency. Having knowledge of what’s happening might be useless in its way– it was useless for people in Central Ohio, certainly– but you have to know. So you watch. And they repeat the images over and over again– from the plane crash to the tower collapse to the reactions of people on the street, to the tight-jawed anchor in the newsroom reading the same few lines over and over for whoever just tuned in. It gets more ridiculous as the hours go by, because everyone in the world has tuned in, but they just keep repeating the news again and again. The images play on and on until they seem like nonsense; they themselves become cliches and then devolve into abstracts, a patchwork of moving shapes that make no sense to the eye. The tower is there, and then it’s moving down like an elevator car into a shaft, and then it’s gone, nothing but black smoke, and the people behind the cameraman are screaming. Over and over again.

And then they broke in with something new.

The news anchor was in the middle of repeating his update that wasn’t an update for the thousandth time, when they showed the second tower descending like an elevator car into a shaft, dissolving from a tower of steel and concrete into a tower of smoke. And then the smoke enveloping the screen, papers flying everywhere in the dust cloud; I tried not to wonder how there were so many intact pieces of paper in the air when bricks and mortar and glass had turned to dust, because it seemed such a frivolous question. The cameraman was running, his camera tilted down so all we got was trouser-clad legs and pounding feet in expensive shoes, and more dust. The reporter was yelling, “Where’s my cameraman? I can’t find my cameraman! Where’s my cameraman?”

They switched back to the studio. The anchor was stammering. “It’s partially collapsed, is that what you’re saying?”

It’s become a joke, now. Something everybody knows; something dishonest people use to sell us political policies and tasteless people use for advertisements.  Now we all know that both towers were reduced to dust and two plumes of smoke, but we didn’t know it then. We couldn’t understand it, then. It was nonsense– nonsense images and nonsense words, a horror film that no one could have believed, being shown on the news.

When my family came home, the newscasters were repeating that video, over and over again, on parade with the others. They had other videos now, as well– different angles of the same event. You could see the men and women jumping from the windows. They were showing un-edited and uncensored footage, with amateur photographers screaming obscenities in their shock as the towers collapsed.

“Why did they do that?” demanded an aghast Charismatic woman I knew. “Why would you do that? Why didn’t they edit out the swear word? That’s so irresponsible.”

The woman went on for quite some time about how offensive it was.

They showed un-edited footage of people jumping from the top floors of the towers, over and over again.

“Why are they doing that?” the Charismatic woman asked.  “Why are they jumping? What did they think they were going to accomplish?”

The woman had no answer. She looked offended.

That’s what 9/11 was like, before it was history and politics and TSA pat-downs. It was real thing that happened, fifteen years ago. Real things happen every day. When they hurt enough people at once, they’re called History and Interesting Times.

But they don’t start out as history.

They start out as a sunny morning, when you’re thinking about reading a book. 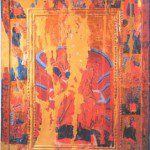 September 11, 2016 Bless My Enemies
Recent Comments
0 | Leave a Comment
Browse Our Archives
get the latest from
Steel Magnificat
Sign up for our newsletter
POPULAR AT PATHEOS Catholic
1