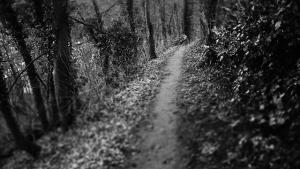 We used to vacation in Pocahontas County.

My family had reunions in the old CCC cabins at a at a state park there, the most beautiful place I’ve ever been, the place where nature taught me everything I know about Divine Mercy.  I learned plenty walking in the woods alone, and plenty more with all my cousins.

Granny and Grandpa had seven children, who gave then 35 grandchildren. We were quite the crowd. I was surprised, when I grew up and found that many families have planned activities at their family reunions– games and sports to pass the time. We didn’t. My cousins and I just played together in a most unruly and disorganized fashion from early morning until we stumbled to a cabin demanding dinner in the evenings. We hunted frogs and crayfish in the creeks; we threw rocks; we hiked unsupervised on the Lake Trail. We took boats out on the lake and walked under waterfalls with our clothes on. We threw more random objects than I can recall into the log cabins’ fireplaces to see what color flame they made. Once, my cousin poured sweet tea on a mud daubers’ hive to see what they’d do.

We weren’t interested in any activities put on by the State Park, most of the time. The weekly “Creek Stomp” didn’t look like much fun when we were already stomping in creeks anyway, without the supervision of a park ranger. The “Game Night” at the rec center didn’t appeal when we had a deck of cards and a Clue game that we played with, violently, making up our own rules, in the cabins whenever it rained.

One year, however, there was an activity the park offered that we all wanted to try: the Night Hike.

A ranger was going to take anyone who was staying at the park on a free hike around the lake trail, after dark, to teach them about surviving in the woods at night and about nocturnal animals.

We begged our parents to let us go on the Night Hike. It would be educational, we argued. We would learn all about the local fauna, all about woodcraft and how to survive in the woods after dark.

Our parents did better than allow it. One aunt, one uncle and my grandparents came along with us to join the fun– and they forbade any small children under a certain age to come along, so we older children could have some good clean educational excitement without little ones underfoot. There were about twelve of my family members on the Night Hike all together, plus five or six other tourists, and one young park ranger who was supposed to be our guide.

The first thing the park ranger did was have each of us take a rock and put it in a plastic bag he was carrying. This was so that he could count the rocks after the hike and make sure that nobody was left behind on the trail, but he didn’t tell us that. He looked a little miffed when my cousins picked up several handfuls of muddy gravel each and added them to his bag. It had been raining for much of the week; the gravel was soaking wet.

Then the guide announced that we were not to turn on our flashlights, because they would ruin our night vision. We were also to shield our eyes whenever we heard a car driving by on the country road near the lake trail, for fear the car’s headlights would do the same.

He said we were going to learn about nocturnal creatures who used their senses of touch, hearing and smell to get around after dark, but as it turns out we didn’t learn much of anything about any creatures. He only stopped once, at the very beginning of the Night Hike, to try to teach us about Great Horned Owls.

The guide announced that he was going to call a female Great Horned Owl who lived in a nearby tree, using a traditional mating call and impersonating the male of the species. He cupped his hands to his mouth and said “Ah-HOO, hoo, hoo, hoo, HOO” in the least owlish fashion imaginable, with a hint of his West Virginia drawl clearly audible in the vowels. I don’t think I’ve heard a single human utterance that sounded less like an owl call in my life. Playing “Who Let the Dogs Out” on a stereo would have been closer to the mark.

The female owl was not fooled either. She did not return the gentleman’s wooing, but remained silent.

This apparently disconcerted the ranger. He didn’t say too much either for the rest of the hike, except to shout “CAR!” when a car was coming so that we could cover our eyes.

Dark fell moments after the owl demonstration– by which I mean, it really fell, all at once, like a coffin lid. Out in that part of West Virginia there are absolutely no street lights or illuminated buildings, not for miles. When night falls it does so eerily quick and it’s pitch black. The only light is from the moon, which wasn’t full on this night, or from the headlights of passing cars. And covering your eyes for a second after you’ve seen the car isn’t sufficient to protect your night vision from headlights on a country road. It just makes you look silly. You can’t see a thing no matter what. You could walk right into a wall, or off a cliff.

The first stretch of the Lake Trail was not on a cliff, thankfully. It was a packed dirt trail with plenty of treacherous roots on an embankment beside the lake. And the trail was very muddy that year, with all the rain we’d been having. My cousins and I knew this because we’d been running back and forth on the trail unsupervised all week long, falling into the mud, sliding off the trail entirely, nearly falling into the lake in a dozen different places. It was all good fun in daylight. We knew, but apparently the guide wasn’t ready for it.

On his instruction, everyone put his or her hands on the shoulders of the person in front of them.