I Found a Mountain 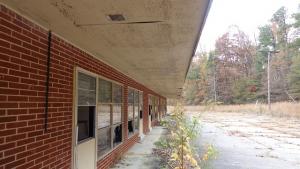 I took Rose to her annual doctors’ appointment.

It was in the old medical building, the first hospital they built in Steubenville, and where they still keep the hospice and certain other things. Behind it is the old nursing school.

I used to live there.

The year I came to Steubenville was the last year Franciscan University rented the nursing school’s dorms for their graduate students. I lived on the third floor for nine months. That was twelve years ago, when I was young. I didn’t like this strange town, but I was sure I’d only be there two or three years. I’d get that MA in philosophy with a concentration in bioethics, and then I’d get a doctorate in bioethics in a real city– maybe Saint Louis. I’d be a very important thinker in the field of bioethics, and I’d save many lives. I didn’t particularly like bioethics, but I was sure I had a calling from God.

It all seemed so simple at the time.

Rose was very good for the doctor. We were both thrilled that she didn’t need any shots. The whole thing went off without a hitch until we left the office and realized we’d missed the last convenient bus before the two o’clock break. We would be stuck at the hospital complex for an hour.

We went down to the cafeteria for a bag of chips.

“This is where I ate when we were snowed in,” I said. “We usually ate on campus, but there was no way to get to Franciscan’s campus after the ice storm. The shuttle couldn’t take us out of the parking lot. So we ate here.”

That snow day was on Valentine’s Day. We slipped valentines under each other’s doors that morning. The dorm party was cancelled because nobody could go out and buy party things, but we watched Finding Nemo in the lobby before we went to dinner. A young man I had classes with, who lived on the men’s floor, presented me with a bag of heart-shaped sugar cookies right there in the cafeteria in front of a crowd of friends and said “I love you, Mary. I just wanted you to know that.” It was the first time a man had ever said that to me. My heart raced; I almost blurted out “I love you too,” but thankfully I was too shy to find my tongue. A moment later I realized it was a prank.

I didn’t tell Rose about that.

We went to the gift shop and browsed. We went up the elevator to the top floor, to see the view of the parking garage from the window. She liked that the parking spaces on top of the garage were laid out like a big letter Z.

I thought of the legendary suicide that supposedly took place in that parking garage, the one I heard about one day on the bus. But I didn’t tell her about that either. I just shared her admiration for the Z.

We went to each floor on the elevator, practicing our numeracy and reading the symbols on signs. I told her a picture of a boy and girl meant a bathroom, and a picture of a knife and fork meant a place to eat. We stumbled on the floor where they do the same-day surgeries; I inhaled that ominous antiseptic smell, the smell of surgery, the smell of being in danger, and bit my lip.

At dawn, I asked the RA to call me an ambulance to the emergency room on the hospital’s other campus across town. I begged her not to call my parents because I didn’t want to deal with them complaining about my habit of getting sick at inconvenient times. But of course she did.

“Want to see where I used to live?” I asked.

I took her around behind the building, to where the dormitories are.

They’re closed now. The nursing school has been moved to the community college. The building is disused and falling apart, but the parking lot is still open.

We passed a parking spot labeled “Reserved for Student of the Month!” It was occupied not by a car, but by a large neat pile of fresh mulch– a memento mori if ever I’ve seen one.

“I found a mountain!” said Rose, admiring the mulch.

I walked on. “This is where we built a snowman when we had a snow day. We rolled the snowball up this hill. And we used to sit out on this porch and watch the view. But you know, I was very different back then. You changed me.”

Rose was not listening; she was still looking longingly at that mulch.

It was right at that spot that my mother dropped me off at the dormitory, the very first time. She had been lecturing me on my inadequacies and what a terrible person I was for the entire trip. She finished with, “I hope this school can do something for you, because we give up.”

I got out of the car. Immediately a crowd of returning students swamped me, applauding and crying “welcome.” They took all my bags from the trunk and whisked me inside. Then my sojourn in the Ohio Valley began.

I don’t expect I’ll ever see my mother again.

Nature is already reclaiming that dormitory. The sidewalk was riddled with deep cracks, and the cracks were bursting with weeds. You used to have a grand view of downtown and the river from the porch; now you have a grand view of shrubby trees, with glimpses of downtown in between them. I could see the Carnegie library with the scaffold set up for its new children’s room, and the copper dome of the Greek Orthodox church. Beyond that was the Ohio river, and the foothills of the Appalachian mountains.

That’s the direction we’re going, probably sometime late this year or early next. Over to West Virginia or Pennsylvania. It could happen very soon. This might be the last time I ever stand on that spot and look at the view.

I peeked through the doors to the dormitory lobby. It was in shadow, dusty; a patch of white plaster from the ceiling had fallen to the floor. I could almost imagine a bit of snow from that snow day twelve years ago had been tracked inside and never melted. Never mind that it was July and I was in my thirties, wearing a wedding ring and minding a daughter who was almost seven. It felt like it was mid-February and I was that neurotic, ugly, studious girl who had never been loved. In a moment the receptionist would surely come back to her desk. She would push the buzzer and let me in. I would set down my book bag in my room; then I would take the creaky elevator downstairs to the dorm chapel and pray to God to bless me in my upcoming career as a bioethicist in a big city. Or I would cry to Him and tell Him how lonely I was, or beg Him to make me a good person so my mother wouldn’t give up. Or my stomach would start hurting, and I would go back upstairs to and wait for it to stop, and end up in the real hospital across town again, begging the RA not to tell anyone.

Or I would find a mountain in an unexpected place. I would set out to climb it, thinking it was small, and still be climbing twelve years later.

Rose came up behind me. “I changed everything?”

Rose climbed up the mountain of mulch and down the other side as we walked back.

It was time to go home.