A Parade, a Kiss, and a Longing for the Beautiful

A Parade, a Kiss, and a Longing for the Beautiful November 24, 2018 Mary Pezzulo 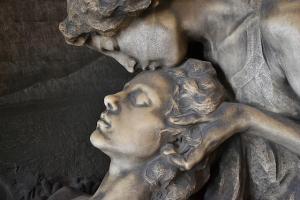 I’ve been wanting to write something Thanksgiving-themed all week but I got so busy with this and that that I just re-shared a cutesy old post from several years ago instead.  This is my first chance to talk about my Thanksgiving, and here it seems to be a post that’s going along with the unofficial theme of the past week: Christians getting hysterical about things I dislike but feel compelled to defend against their fears.

You may recall that I ended up writing a post this week defending Harry Potter, a series I don’t care for too much, from a Catholic mother who thought it was demonic. Then I ended up writing, in a roundabout way, about Celine Dion’s  ugly unisex clothing line and how I don’t agree with my fellow Catholics who think it will make you possessed by the devil. During the past week I was also planning to draft a post about  Joseph Sciambra’s bizarre denunciation of a tacky painting he found in a Catholic spiritual center in California– he denounced it not because the painting was ugly but because it portrayed the four elements of wind, water, earth and fire. In contrast to Saint Augustine, the Angelic Doctor Thomas Aquinas, and just about every Medieval Catholic including the illuminators of the Book of Kells, Sciambra believes that the four elements are a Satanic infiltration of the Church and also somehow homosexual. That post never really got off the ground because I couldn’t think of anything to do but laugh.

That brings me to what I did on Thanksgiving.

Thanksgiving was fun because I watched the Macy’s Parade just as I used to when I was little. I didn’t find an annoying livestream this year; instead, I got a one-week free trial of Hulu Live so I could enjoy the traditional NBC coverage of the Macy’s Parade and the Kennel Club Dog Show as well, just like I did as a child. I love the Macy’s Parade and I love NBC’s kitschy coverage best of all. I especially like the scenes from Broadway musicals they show before the parade reaches Herald Square. Rosie and I have been doing an extensive homeschooling unit study on theater history and theater appreciation, so I made her sit and watch some of the Broadway musical scenes with me.

Rosie wasn’t very impressed by the musicals– nor was I. The My Fair Lady revival looked pretty good, but nothing else really stood out. We were particularly unimpressed by the number that followed My Fair Lady, from a musical called The Prom. It had that grindy bouncy electric guitar music that unimaginative musicals tend to have in lieu of catchy tunes. I couldn’t discern a real melody. The dancing wasn’t remarkable either, and the costumes were just okay. In the last seconds of this musical number, there was a blink-and-you’ll-miss-it female-on-female kiss.

Rosie didn’t notice the kiss at all. She’d lost interest, and was setting up a field day racecourse for her teddy bears. Rosie and I have been studying plays for months; she’s seen scenes from Shakespeare filmed in the Globe Theater, award-winning numbers from really excellent musicals from years past, and even the first five minutes of a traditional staging of Oedipus Rex  (“It’s an ancient story about a man who accidentally marries his mom,” I told her, and left it at that). She knows a bad play when she sees it, and she filtered it out. So did I, until the uninspired number was brought back to my attention the next day.

You guessed it. yesterday, the same type of Nervous Internet Christians who were terrified of unisex clothing and Harry Potter were condemning NBC for showing the kiss. There was a tweet about how children all over the country had their innocence “shattered” by what was meant to be a family show. This, too, it seems, was the work of the devil.

I can safely say that my daughter’s innocence was not shattered by two actresses kissing on television this Thanksgiving. It was also not shattered earlier this year when a male MasterChef contestant kissed another man and called him his husband.  I paused the MasterChef video and explained to Rosie that, as she knew, in our religion we believe that the sacrament of Holy Matrimony is for a man and a woman, but other people not of our religion have different notions about what can be called marriage than we do, and that people who have different beliefs are not dangerous or trying to hurt us, and that we as Catholics should follow Christ in everything– including in being kind, friendly and loving to people whether we agree with them on every point or not, and I expected her to be kind. She said “I know that,” and we went back to watching the cooking contest. It was one of the simplest things I’ve ever had to explain to Rosie. By contrast, it was far more difficult to explain to her why the guests we visit at The Friendship Room don’t have safe houses or food to eat, or why she heard from the news that children are being kept in cages at the Southern border, or why the people on the bus keep saying in her earshot that she’s lucky to homeschool because she won’t get shot. There’s plenty that could shatter a child in our society. The Macy’s Parade didn’t do it.

That makes four times in less than two weeks that I’ve found myself defending something I didn’t like. Harry Potter is all right, if you don’t have A Wrinkle in Time or the Dalemark Quartet in hand. The other things are just plain bad. But none of them represents a dangerous and life-shattering Satanic attack on Catholicism, families or the innocence of children. They’re ugly and boring, that’s all. An un-aesthetic painting is not a demonic painting. An okay children’s book series is not a gateway to the occult. A tasteless white sleeper with eyeballs silk-screened on it is not going to make a child possessed. A bad musical for adults, which has already been panned by critics, about people whose values are not the same as Catholic values, is not going to “shatter” the innocence of children. They’re probably not going to notice, and if they do, explaining it to them is not hard.

And I’m tired of talking about this now.

I have spent way too much energy this week, refuting my fellow believers about things I don’t like in the first place.

I’m tired of writing about things I don’t like.

The word “Catholic” doesn’t mean “afraid of your own shadow.” “Catholic” means “universal.” There’s a big beautiful universe out there so full of wonderful things to look at, praise God for and enjoy. I’m tired of defending boring and ugly things that shouldn’t take up our time from people who see demons around every corner.

Thanksgiving is over, so we’re already in the secular Holiday Season. Christ the King Sunday is tomorrow, and then we’ll be in the Advent season, a great time to talk about beauty. Here’s what I’m going to do. I’m going to continue meditating on the Lord’s Prayer a bit at a time, as I started to do this week, all the way up until Christmas. I’m also going to commit to writing a post about aesthetics and beautiful things at least once a week until Christmas, because the world needs more of that. It doesn’t need more pearl-clutchers who seek the devil in everything. We’ve got plenty of those.

I want to write about beautiful things. 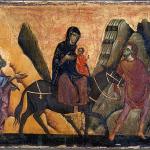 November 27, 2018 Migrants, Conspiracies and a Facebook Racist
Recent Comments
0 | Leave a Comment
"The Groper-in-Chief, his lickspittles, and his loonies are a moral and social cancer. We have ..."
alwayspuzzled As We Wake From A Nightmare ..."
"Dress warmly. It’s -45 today.Wednesday January 20, the first day of 2021."
BensNewLogin As We Wake From A Nightmare ..."
"I was going by the heritage foundation report. When the opposition provides you with the ..."
BensNewLogin Justice Sotomayor’s Pro-Life Dissent
"From what I've seen it plateaus under Republicans, falls under Democrats (after Carter) and rose ..."
Mary Justice Sotomayor’s Pro-Life Dissent
Browse Our Archives
get the latest from
Steel Magnificat
Sign up for our newsletter
POPULAR AT PATHEOS Catholic
1