At the Corner of the Grass 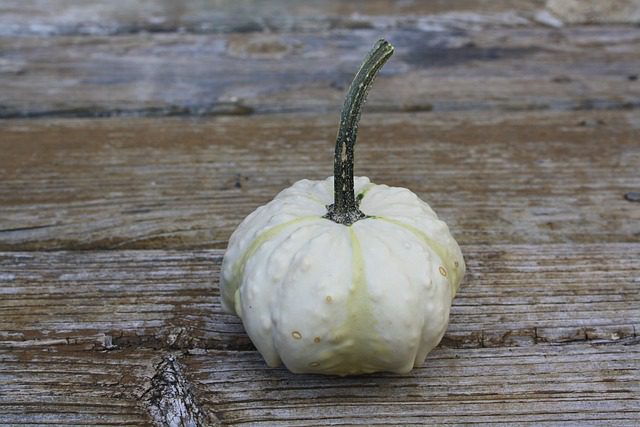 The day before Thanksgiving was sunny, the first sunny day in a week or more. It was warm when it had been freezing for days. Everything felt so gloriously clean. Adrienne wanted me to play on her porch with the guinea pig before I went to the store to buy the last few things for our turkey dinner.

She went out for a few minutes before I joined her. When I came out, Adrienne was sitting on the porch, talking cheerfully to the guinea pig, whose name is Fluffy or Lady McFluff. As I sat down to join her, I noticed that our little display of miniature pumpkins on the corner of the porch was disturbed. The two orange ones were there, but the milk-white one was missing.

I scanned the yard, and saw the white pumpkin on its side on the corner of the lawn– the corner facing our menacing neighbor’s bright blue house.

All at once, panic rose like vomit in my throat.

“What happened to the pumpkin?” I demanded, balling my fists. I was certain for just a moment that the neighbor had trespassed and thrown it into the yard, just to be spiteful. She’d trespassed so many times before– smearing dog droppings on the porch, tearing up the garden, heaping grass clippings and rotten steak, dumping the charcoal from her grill. I couldn’t count the number of times I’d tried to get help but the police had laughed or yelled at me, and here it was happening again.

“I threw it,” said Adrienne casually. “There were sparrows on the lawn and they scared McFluff. She stopped squeaking when they landed. So I scared them away.”

I sat on the porch and let my heart rate return to normal. It took awhile.

Our neighbor hasn’t bothered us since July.

I can’t tell you how strange that is.

She had been terrorizing us for seven years, and for seven years we couldn’t get away. We live on a financial knife edge. The house we rent is the cheapest rental house in town, and we’re lucky to have it. When she first moved in, she made nice to us and terrorized the disabled boy across the street, but then one day she switched victims. Apparently she’s always switching victims. The stories came in as I compared notes with the neighborhood gossips. She is forever deciding that one person is her sworn enemy and doing everything she can to make their lives hell, while currying favor with everyone else– until the day that she switches from one victim to another to everybody’s consternation. We were one of a string of targets. She would harass and sometimes assault and batter when we went to mow the lawn. She was notorious for calling the police and social services– so much so that social services stopped answering, and we witnessed her fury when the 911 dispatcher hung up on her twice, but the police would laugh and banter with her and do nothing. She would vandalize. She made more and more violent threats from her porch and under my window in the dead of night. The events of 2021 and early 2022 were more horrendous than I can describe. There was an episode with her about every two weeks in the warm months and about once a month in winter, like clockwork. You could predict her manic bursts on a calendar. The police started calling me by name when they saw me, because they were so used to coming out to my house to yell at us for not deescalating the attacks. And then she started to slow down.

It was just over.

That giant German shepherd she used to let loose on our lawn is apparently dead or rehomed; I haven’t heard the rattling of his chain since October.

She does not come outside anymore.

She doesn’t even mow her lawn. She used to stim back and forth across the yard with the mower for at least two hours every Wednesday and Saturday from the spring thaw until the first hard freeze, cursing to herself the whole time, wearing a comically large floppy gardening hat and little else. But now her lawn gets raggedy. The neighbor down the block who comes by and mows our lawn now and then just to be neighborly mows hers after he finishes ours. That would’ve been taking his life in his hands last year, but this year she allows it.

The only way I know she’s still alive, is that I see the lights come on in her windows from time to time.

I don’t know if I scared her into submission by confronting her about the trespassing, or if her cancer finally got the better of her, or if she was forced onto medication for whatever her condition is. I only know that she’s quiet.

I am so unused to quiet.

If you’ve had a stalker, maybe you know how it feels without my telling you. If you haven’t, I don’t know what I can possibly say to get across the feeling. One day they don’t come back, and it’s quiet. But the fear doesn’t go away all at once. It can’t. Dealing with someone like that means lulls of quiet that you hope last and never do. I’ve had a lull of four months now.

I would have anxiety and PTSD anyway. I grew up in an emotionally abusive family the Charismatic Renewal, I’ve been the victim of a rape, I have PCOS which causes panic attacks merely from brain chemistry. But I also have anxiety and PTSD from my neighbor. And it got markedly worse in the past twenty-four months or so, with the escalation of her harassment.

I haven’t read a whole book or even watched a whole movie this calendar year. My attention starts to flake out and I panic. I have been trying to get that capacity back, reading a chapter here and there, watching twenty minutes of a television show and shutting it off. I think I’m beginning to get my ability back.

I still park the car out of sight of the house.

I still walk out of the house with my keys in my fist like a shiv, just in case.

I still have my phone at the ready to photograph her antics in case she attacks.

I still don’t like to be in my own backyard.

I always thought the situation would end dramatically– that the police would miraculously believe me and drag her away in cuffs, or that she’d drop dead of a heart attack while pushing the lawnmower, or that she’d burn her own house down in a manic rage one day. But it ended, not with a bang but a whimper, and left me here still anticipating the next attack.

I still treat little things like a pumpkin appearing at the edge of “her” side of the lawn as a threat.

The pumpkin couldn’t hurt me, however. It just scarred me like it scared those sparrows. I took a few deep breaths; I  enjoyed the play with Fluffy and Adrienne on the porch. When playtime was over, she took the guinea pig inside, and I went to get the pumpkin.

I tiptoed over to the corner of my yard, in sight of the neighbor’s bright blue house.

I bent to get it, cringing, but she did not come out.

I straightened and looked at her house, waiting, but she did not come out.

I stood there for a moment, with my toes touching the border line she’d had her workmen dig in between our houses. And then I moved forward an inch.

She didn’t come out.

It was a warm, beautiful, sunny day in late November, and there was no danger anywhere.

I brough the pumpkin back to my porch, and went inside to get ready for the next day’s feast.

I still don’t understand what game she’s been playing all these years. But somehow I won.

That has to be enough for now. 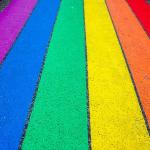 November 22, 2022
An Update on the Situation in the Diocese of Oakland
Next Post