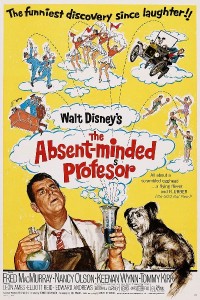 Ned Brainard, a chronically absent-minded chemistry professor at cash-strapped Medfield College, stumbles across an anti-gravity substance that he believes can save his beloved institution. While his bumbling effort to monetize the discovery prove ineffective, he does manage to attract the attention of the powerful Alonzo Hawk, a corrupt businessman who vows to steal the material for himself.

Professor Ned Brainard (Fred MacMurray) is absent-minded. Astonishingly so. In fact, he’s so absented-minded, he’s late for his own wedding. And it’s not the first time he’s stranded the charming Miss Carlisle (Nancy Olson) at the altar, either. But at least he’s got a good excuse this time. He was busy discovering Flubber, a mysterious, rubbery substance that actually gains speed and energy when it hits other objects rather than losing them.

Convinced that his invention will save the struggling Medfield College — as success that will, in turn, salvage his relationship with the now-understandably-miffed Miss Carlisle — Professor Ned sets out to prove to his detractors that Flubber is the solution to all their problems. Hilarious hi-jinx ensue: Flubber-based basketball success for the previously-door-mat Medfield, a Flubber-fueled, flying Model-T, even a Flubbericious dance sequence where Brainard’s Flubber-soled dress shoes greatly enhance his (previously unmemorable) dancing abilities. Unfortunately, all his antics succeed in doing is capturing the attention of Alonzo Hawk (Keenan Wynn), an unscrupulous businessman who is Medfield’s most famous and powerful alumnus (as well as the holder of most of its debt).

Seeing an opportunity where others see only absurdity, Hawk plans to seize the discovery for his own monetary gains. But Brainard’s goofy absent-mindedness hides a surprisingly stubborn streak; he and his friends are unwilling to hand over their Flubber without a fight. And in the high-flying — or is that bouncing — finale(s), everyone gets their just desserts. (Well, maybe not entirely just. Disney’s not quite mean enough for that.) 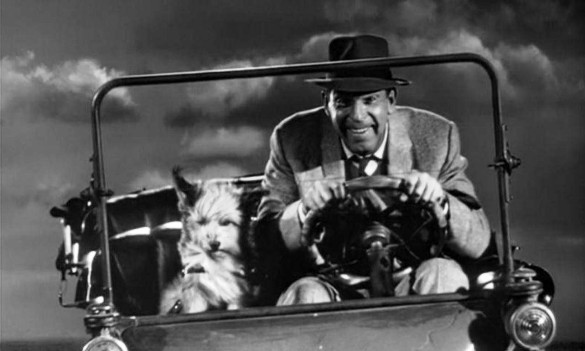 Directed by the legendary Robert Stevenson (of Mary Poppins fame), the film is neither groundbreaking nor narratively or thematically complex. What it is, though, is a tremendous amount of fun. Anchored by MacMurray’s goofy, sincere, almost impossibly absent-minded Ned and bolstered by universally enjoyable supporting performances — Wynn’s despicable Hawk is particularly noteworthy — the laughs it produces are many and heartfelt. You’d be hard-pressed to find a more enjoyable Friday-night charmer.

The film is rated G. So G, in fact, that the “Parental Guidance” section of its IMDB page is blank. Enjoy.

I’m inclined to say 5-and-up, those that’s more of a “comprehension” issue than an “appropriateness” one. Youngsters might find the setup it a bit hard to follow (particularly the laboratory scenes). There is a tense moment or two near the end of the film when the U.S. Government confusedly scrambles its fighters in an attempt to intercept Brainard’s Model-T that could be a bit much for the very young. But we have watched and enjoyed it down to the 4-year-old level here in the Susanka house. Pretty much universally acceptable.

The film’s unexpected box office success led to an eventual sequel, making it the first Disney film to earn that distinction. (Sadly, it also earned itself a remake: Robin Williams’ Flubber, from 1997. But let us not speak of such sorrowful matters.) Son of Flubber returns much of the original cast and crew to Medfield, and while it has never managed to capture my imagination as wholly as its predecessor, it, too, is excellent family fare.

For those who find themselves inexplicable drawn to the fictional Medfield College, it serves as the academic backdrop for Kurt Russell’s “Dexter Reilly” trilogy  — The Computer Wore Tennis Shoes, Now You See Him, Now You Don’t, and The Strongest Man in the World. The whole series is a lot of fun, though probably ideal for a slightly older audience.

Attribution(s): All posters, publicity images, and movie stills are the property of Walt Disney Pictures and other respective production studios and distributors, and are intended for editorial use only. 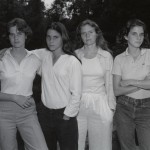 May 27, 2013 A Sacred Charge Upon a Nation's Gratitude
Recent Comments
0 | Leave a Comment
"Did you manage to find if this was Alda or Asimov? I can't find either."
John Ender Intriguing Quote of the Day, Courtesy ..."
"I'm not sure there is a conclusion to be drawn, Burnetten, other than the one ..."
Joseph Susanka A Handful Of Mighty Musical Hunters
"Thanks for this assessment. I wish that some conclusions had been drawn. The similarity between ..."
burnetten A Handful Of Mighty Musical Hunters
"It's hard to be human and have choices? It's easy to be a dog or ..."
Fern Henley An Uncomfortably Challenging Quote from Aleksandr ..."
Browse Our Archives
Related posts from Summa This, Summa That