The Science of the Sacred Heart: Tender yet Metal

Today’s feast is simultaneously the most tender and the most metal of Catholicism: The Solemnity of the Sacred Heart of Jesus. We celebrate the mystery of the love of God, who stooped down to take on our human flesh, and endured His Passion while remaining an inexhaustible source of compassion. His human Heart — pierced, wounded, and bleeding — is our refuge and our source of strength.

The Sacred Heart is a personal devotion of mine, because “Jesus, make my heart like Yours” pretty much summarises my spirituality. Over the years, my devotion has been fed by two stunning scientific insights: the science of fetal heart development, and the analysis of consecrated hosts in cases of Eucharistic miracles.

1. The Sacred Heart in the womb of Mary

The science of a baby’s heart development shows the fragility of the Heart of our Savior.

In the womb, the fetal heart begins beating rapidly by about the third week of life, and it is strong enough to be detected by the sixth week. But throughout pregnancy, the heart cannot actually perform its function. The fetal heart cannot pump oxygenated blood through the circulatory system, because the lungs cannot breathe.

Instead, the mother’s body ‘breathes’ for the baby through the placenta, an organ formed by the child and mother together. Nutrients and oxygen move across a thin layer of cells in the placenta, from the blood of the mother to that of the fetus. At the same time, waste products move from the fetus to the mother. Then, oxygen-rich blood traverses the umbilical cord to the child’s liver, and from there, to the rest of the body.

A baby’s umbilical cord is clamped at birth, ending this intimate connection between child and mother. As the infant’s lungs begin to inflate and deflate, fluid clears from the alveoli and blood pressure rises. As a result, the anatomy of the child’s heart actually changes. Two shunts, which had enabled blood to bypass the heart and liver, close so that the beating of the heart might pump blood throughout the body.

For nine long months, the Immaculate Heart of Mary beat for the Sacred Heart of Jesus, and her lungs breathed for His. What a mystery to ponder. The Savior of the world not only chose to take on our flesh, but entered the world in a condition of total dependence. Mary, the glory of our race, enabled the Heart of God to beat for us.

As Mary and Joseph brought the Child Jesus to the temple for the first time, Simeon prophesied that the heart of Mary would be pierced (Luke 2:35). And indeed, when His side was pierced on the Cross thirty-three years later, so too was her heart pierced with sorrow. How could it not be, after her heart had beat for His, her heart had formed His, her heart had suffered with His!

Heart of Jesus, formed by the Holy Spirit in the womb of the Virgin Mother, have mercy on us.

2. The Sacred Heart present in the Eucharist

The scientific study of Eucharistic miracles reminds us, tangibly, the presence of the Sacred Heart in the consecrated Host.

Eucharistic miracles are the most badass of all, in my humble opinion. Over the centuries, hundreds have occurred in Catholic Churches throughout the world. Perhaps the most famous is the Miracle of Bolsena, in 1263. Blood began to trickle from a consecrated Host during Mass, and falling onto an altar cloth, it formed an image of the visage of Christ. In celebration of this event, and upon the encouragement of St. Thomas Aquinas, Pope Urban IV instituted the Feast of Corpus Christi.

In the modern era, Eucharistic miracles have been subject to intense scientific scrutiny, often with astonishing results. Take, for instance, the Eucharistic miracle of Solkolka, which occurred in 2008. After a Host fell from the hands of a priest during distribution of Communion, it grew red as if stained with blood. Upon examination by independent scientific experts, the piece of altered host was identified as myocardial or heart tissue, closely intertwined with the structure of bread. Not only that, but the cells displayed histological characteristics typical of dying tissue. Similarly, a few decades ago, a miracle occurred in Argentina in which the consecrated Host developed reddish stains. Genetic testing revealed the red spots to be human blood; further analyses identified intact myocardial cells and active white blood cells. The Host contained the physical presence of distressed heart tissue.

Eucharistic miracles are not given to prove doctrine through science — especially not before they receive confirmation from the Vatican. Rather, our belief in the Eucharist should come from our trust in Christ’s words in Scripture (see John 6:48-58 and 1 Corinthians 10:16). But these miracles do invite us to a deeper devotion to His Sacred Heart, present in the Eucharist. These mysteries are a powerful invitation to reverence the one who suffered for our sake, to adore the one who died of love for us. In the words of the 16th century hymn Cristo al morir tendea, “As He gives heart and soul to take you to Heaven, / will you leave Him for another love?”

Heart of Jesus, of whose fullness we have all received, have mercy on us.

To celebrate the Solemnity, I made a Sacred Heart playlist on Spotify. Enjoy! 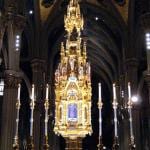 June 15, 2020
Love and Longing in the Time of Coronavirus
Next Post

July 6, 2020 The Dizzying Smallness of Life
Browse Our Archives
Related posts from Synapses of the Soul