The thing on my mind this morning is the Gospel lesson for this Sunday: Mark 1:40-45.

I am painfully and increasingly aware of my own quirks, oddities, peculiarities and, as we call them in churchy language, gifts. One of the (many) gifts I have is that I tend to think rather obsessively about the lectionary scripture passages for the week.

My increasing awareness of strange habits like this one is thanks in large part, not only to my ever-growing self awareness but also to the ongoing observation, analysis and commentary of my dear husband, Mark. Yes, it was thanks to him that I first became aware that most people do not think obsessively about the gospel text for the week.

I wish I could assure you that I think about different portions of the Bible just because I am a generally holy person. Sadly, this is not the case. I’d like to ask for a little bit of grace, though; if you had to stand up in front of a group of people and talk seemingly thoughtfully about a portion of the Bible for 20 minutes straight EVERY SINGLE WEEK, you would start thinking more about it, too.

So, as the days pass and the pressure to be thoughtful and profound gives way to a quiet desperation, say on Saturday, I swear I start to see the message of that week’s Gospel lesson wherever I turn. Some of these observations are valid; some are merely hallucinations of a desperate procrastinator.

It was actually Wednesday morning of this week when I happened to be reading The Washington Post and came across and article in the Metro Section entitled, Guardian of the Green Card. I had just been reading a chapter from Marcus Borg’s very interesting book, Meeting Jesus Again for the First Time, and his thoughts on the law of compassion plus the gospel story of Jesus healing the leper from Mark plus the leftover effects of the NyQuil I took the night before all combined to make me think hard about how very radical this Jesus must have seemed to everyone around him.

The Post article told the story of Carmen Mercer. Mercer was arriving in 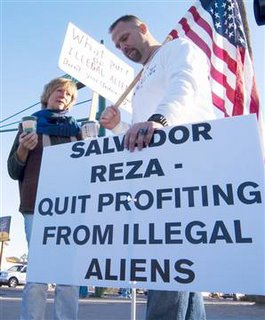 Washington this week to trek to Capitol Hill and protest illegal immigration and efforts to provide amnesty for persons in the United States illegally on behalf of an organization called The Minutemen Project. Mercer is well-known in her home town of Tombstone, Arizona for her regular participation in protests and activities like this: “Many nights she has headed into the Arizona desert in her Chevrolet pickup, on patrol with another woman. Locals call them the Granny Brigade. They sit on lawn chairs perched on hilltops or in the brush, armed with nightvision goggles, walkie-talkies and guns. Mercer’s is a .45-caliber Colt.”

The reporter writing the story followed Mercer, who was wearing a large red and white “Secure America Now! No to Amnesty” sticker, through the airport to her hotel, noting how very many immigrants and probably illegal aliens she encountered along her way. She is adamant that, despite the important role immigrants play in society, America must lay down the law. “You can’t have a country if you don’t have borders,” Mercer said.

When Jesus appeared on the scene there were very strict borders in place—not geographical but ideological and religious and social borders. There was a law, enforced primarily by religious leaders, that helped everybody see the world clearly . . . you know, carefully delineate who belonged in which category. To put it simply, in Jesus’ time you were either holy or not holy.

In the gospel lesson for this week Jesus crosses a border, breaches a boundary, reaches outside a circle. He interacts with a man who had leprosy, not only healing him, but touching him. Major boundary violation. Can you imagine how the disciples must have felt? Jesus had pretty much secured his own unpopularity (if there had ever really been any question about that), entered the world of the unclean, crossed a boundary to join the ranks of those OUTSIDE the circle of holiness.

If we’re supposed to be followers of this man Jesus, I am starting to suspect that he might be

asking us to reach outside the boundaries as well. Could it be that the mandate of our faith is to radically include, involve, welcome . . . perhaps even embrace, cherish, encircle and adopt people OUTSIDE our circle of comfort?

This is very troubling. Very. I mean, it all sounds really nice and everything, but it’s a whole lot harder than it appears. It involves really digging in and investing myself in solving problems and overcoming obstacles. It involves intentionally placing myself in the background.

When we try our hands at this radical way of living I suspect that we will begin to see very clearly how drawing circles to exclude others is a form of personal protection, defense, even. See, it’s in the light of God’s love that we begin to realize that in some very real ways we ourselves are outside the circle of holiness—we’ll never be perfect people who can reach and maintain high and holy standards. It’s much easier to draw a circle tightly and spend our time thinking about who cannot possibly gain entrance to our own circles of holiness because then we don’t have to think too much about our own desperate need for grace, inclusion, forgiveness, embrace.

I saw the Gospel lesson this week, particularly at the end of the Post article about Carmen Mercer, when I read that Carmen was born and raised in a small town near Cologne. That would be Cologne, Germany. After living in the United States illegally for almost 25 years she was kicked off an Arizona zoning committee in 1999 when it became known she was not a citizen. Since that time she has become a naturalized U.S. citizen.

I can draw circles of holiness and inclusion, but that’s dangerous business. When I do it by my own judgment those circles become smaller and smaller, tighter and more constricting, until, ironically, I’ll find myself on the outside.

This morning I think I might be better off doing my best to follow this strange man, Jesus, who drew circles bigger and bigger to include the whole world in the all-encompassing grace of God.

The whole world. Even me.

February 8, 2006
Less of Me, More of God: Some Reflections on Robing
Next Post

What Does The Bible Say About...
Religion Prof: The Blog of James F. McGrath
Related posts from Talk with the Preacher