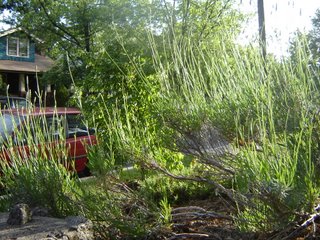 I just noticed the big lavender bushes flanking the front walk of my house (here’s one of them).

I’ve been walking past them for about six weeks not noticing at all, and it took last week’s gospel lesson, John 15:1-8, to make me stop and look. Well, maybe it was last week’s gospel lesson and maybe it was the fact that everything, everywhere, seems to be blooming. Fresh cut grass, heavy-hanging rose bushes, riotous flox . . . it seems that, all of the sudden the whole world has taken on a new look.

When we saw our house for the very first time I remember loving those lavender bushes. They were huge–green with purple flowers that gave off a heady fragrance. I spent some time talking with the owner of the house, asking her specifically what I needed to do in the garden to make sure those lavender bushes kept thriving.

What she told me rang in ears for years afterward: she said you should never, NEVER cut lavender bushes back . . . that if you cut them back they would die.

So, not unlike Samson’s hair, no hedge clippers came near the big lavender bushes. I was adamant. I was determined to protect them no matter what, because all I wished for was the same green bushy foliage, bright purple flowers and spa-reminiscent fragrance.

What I started noticing the last year or so, though, is that the lavender bushes were getting bigger and bigger, more and more leggy, lots of wood . . . and less and less flowers. They still smelled, but not with that heady scent that had captivated me that first day I saw them–more like a faint memory of my first impression.

I finally admitted to myself that something might be wrong.

I remember wondering briefly if I should try to prune them . . . just a little, you know. I think I saw somewhere on HGTV that pruning was good . . . but those words . . .”you should never cut lavender back” . . . well, they rang in my head and kept the clippers at bay.

That all changed rather dramatically about six weeks ago when I hired someone to do the work in my yard that I used to do and now, somehow, cannot find the time. The guys were great; they raked up all the leaves left over from the fall, remulched all the flower beds and cut back the . . . I forgot to tell them, you know, that you’re not supposed to cut lavender back . . . yes, they cut them back. Drastically. WAY back.

I was horrified; so disappointed that my lavender bushes had met this sad fate.

I was horrified, yes, but hadn’t had time to deal with the situation. Then, this week when I walked past my lavender bushes, I noticed something unexpected. They’d been cut back very drastically, but it seems like, almost overnight, they’d exploded. Unencumbered by all of that dead wood, those plants have dramatically bounced back. They are sprouting unlike I have ever seen them sprout before, even more than the first time I ever saw them. They’re not just sprouting . . . they are covered with new, light green shoots that promise a huge–overwhelming–riot of blooms very soon.

I suspect, in fact, that if you come to my house in just about 4 more weeks, you’ll be knocked over by the smell of lavender. 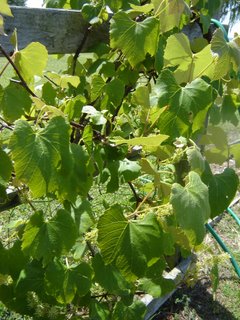 I’ve long heard Jesus’ parable of the vine and the branches. In fact, if I close my eyes I can go back to the Sunday School classroom where I considered the horror of grape shortage–the sure result of the branches being cut off from the vine. At age 5 there seemed to possibly be little that could be worse. (Look at this beautiful grapevine from my friend Harold’s garden!)

But watching my lavender bushes has illustrated what Jesus was talking about in a powerful, tangible way that I have never fully understood before.

Jesus said, “I am the true vine, and my Father is the vine-grower. He removes every branch in me that bears no fruit. Every branch that bears fruit he prunes to make it bear more fruit.”

In our lives the pruning is hard, no doubt about it. But this time of year all it takes is a look into the garden to see what Jesus 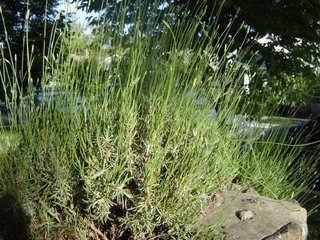 meant–lush, green new life sprouting out all over after what seemed like such a severe way of dealing with the parts of our lives and our communities that drain and damage the whole.

Today my lavender plants are giving me some hope that a severe pruning is not the end after all (look how they’re growing!) . . . only, really, the beginning of new and vibrant life, sprouting out all over every part of what we are and giving off the heady scent of the kingdom of God.

May 26, 2006 Intern Influx
Recent Comments
2 Comments | Leave a Comment
"Any updates with the blog ?"
Stanley Sabbath as Radical Witness
"I really, really, really liked this article. Thank you. ♥"
maguilar9855 When God Gets Political: Enough
"To the author/researcher: I am wondering if you uncovered a time when, as Dr. King ..."
Judith March Hardie MLK at The Riverside Church in ..."
"Church is boring."
Ivan T. Errible Sabbath as Relationship
Browse Our Archives
Related posts from Talk with the Preacher