I’m sorry to say I am not sure the exact number, but I think this is probably about #534 on my list of “What I Did Not Learn In Seminary”.

We tackled the issue of poverty last Sunday in worship, as the lectionary texts spoke eloquently to the question of how our faith might lead us to address the inequities in our society. Right as the service began, almost as if we had planned it, a man who appeared to be someone who li 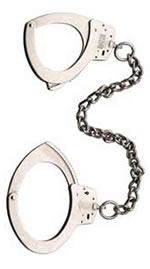 ves on the streets came into worship.

This is not an uncommon occurrence, as Calvary is an urban congregation in the middle of a city with a considerable homeless population.

This man caught my attention more than usual, however, because he was wearing a bulky sweatshirt with a hood and because he came right down to the front to sit.

(It was right then, of course, I knew with certainty that he was not a Baptist.)

I’ll admit I had my eye on him, just to be sure he was okay and that we might be prepared to minimize any disruption that might occur. Some of the ushers and I were giving each other knowing looks right about when two officers from the Washington Metropolitan Police Department marched right down the aisle into worship. All the way up to the front row. And they were not coming forward to join the church (if you know what I mean).

It was right as the Prelude ended that the officers clamped the handcuffs onto the church attender.

It was troubling in that it violated the sanctity of the worship; and that the situation brought a worshipper under civil scrutiny in the sanctuary.

Yet, the realities of being an urban church seemed at the moment to collide with everything I feel about worship. I’ve been wondering all week long: if a violent criminal is aprehended and it happens to be in worship, what’s the appropriate response?

I posted some more about this event here.

September 22, 2006 The Most Wonderful Time of the Year
Recent Comments
7 Comments | Leave a Comment
"Any updates with the blog ?"
Stanley Sabbath as Radical Witness
"I really, really, really liked this article. Thank you. ♥"
maguilar9855 When God Gets Political: Enough
"To the author/researcher: I am wondering if you uncovered a time when, as Dr. King ..."
Judith March Hardie MLK at The Riverside Church in ..."
"Church is boring."
Ivan T. Errible Sabbath as Relationship
Browse Our Archives

A night with Lot in Sodom,...
slacktivist
Related posts from Talk with the Preacher