It was Sunday morning, and some of the group went to church.  I did not.  Christianity in Jerusalem is complicated; it’s not easy to find the nearest Baptist church and just show up.  So while our group’s Episcopal priest (Rev. Winnie Varghese) led a small group to St. George’s Anglican Church for morning services, the remainder of the group had almost two hours with Dr. Rachel Korazim, a noted expert in the field of Jewish education.

As it turns out, that session was a bit like church for me.

We began the morning with prayers and some meditation, reading for Epiphany the assigned passage from the first chapter of Luke’s gospel: “In the tender compassion of our God the dawn from on high shall break upon us, to shine on those who dwell in darkness and the shadow of death, and to guide our feet into the way of peace…”.

We then welcomed Dr. Korazim, a brilliant teacher who made me want to immediately pack up everything, move to Israel, and sit in her classroom for the rest of my life.  She told us that women have a nuanced and largely unheard narrative when they talk about life in Israel through their poetry.  Instead of a nationalistic, triumphalist narrative, the voices of Israeli women poets often express the pain of wandering, of being separated, of longing for home even in a promised land.

Beginning with poets like Lea Goldberg (who died in 1970) and meandering through the story of Israel’s history all the way to a modern-day spoken word poem of Adi Keisar, we understood on a deeply emotional level some of the longing that a nation of refugees brings to its formed identity.

Here I will not hear the voice of the cuckoo.

Here the tree will not wear a cape of snow.

But it is here in the shade of these pines

The chime of the needles: Once upon a time

I called the snow-space homeland,

and the green ice at the river’s edge –

was the poem’s grammar in a foreign place.

suspended between earth and sky –

the heartache of two homelands.

With you I was transplanted twice,

with you, pine trees, I grew –

Black on Black, by Adi Keisar

My grandma loved me with a heavy accent

And spoke to me Yemenite talking,

Which I had never understood

And as a child

How afraid I had been to stay with her alone

Afraid of not understanding the tongue in her mouth

Which continued playing its music to me, smiling,

And I did not understand

one single word she said.

The sounds rang far, far away

even when she spoke to me closely.

She bought me a pineapple yogurt

And after I perforated the thin aluminum lid

and drank it all,

I wanted to say thank you

But did not know

In what language you should.

So I went out to the big garden

and handed it to her

How much awkwardness stood between us

She washed out the yogurt container

Filled it with water

And placed the flower I had given her in it.

I have never understood one word she said.

But I understood her hands

I understood her flesh

Even if even if she never

The words I said

She only loved my little body

And sometimes the heart is asking

And going back to her grave

Pressing your lips against the soil

Everything that little girl had to say

And mainly to warn her

Of the flower I had given her:

A flower full of ants. 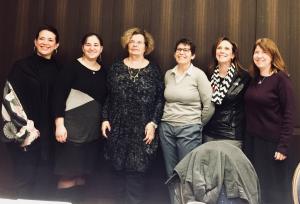 I think this was one of my favorite parts of the entire trip.

January 13, 2018 #HolyWomenHolyLand: "It's Complicated"
Recent Comments
0 | Leave a Comment
"Any updates with the blog ?"
Stanley Sabbath as Radical Witness
"I really, really, really liked this article. Thank you. ♥"
maguilar9855 When God Gets Political: Enough
"To the author/researcher: I am wondering if you uncovered a time when, as Dr. King ..."
Judith March Hardie MLK at The Riverside Church in ..."
"Church is boring."
Ivan T. Errible Sabbath as Relationship
Browse Our Archives
Related posts from Talk with the Preacher