At lunch on Saturday, Shabbat, our Jewish sisters gave us an in-depth history of Israel, specifically as it relates to the Zionist movement.  Truth be told, most of the Christians on the trip had a very surface understanding of Israel’s history and the complicated threads of religion and identity and trauma that inform the way many American Jews think about Israel.  This conversation laid critical and important groundwork for the experiences of the next few days.  But before we started exploring the conflict between Israel and Palestine, we spent some time trying to understand the complicated Christian presence in the city of Old Jerusalem. 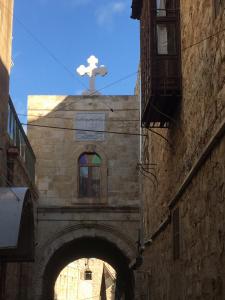 And so, Saturday afternoon we wandered through the Christian quarter of the Old City of Jerusalem.  Our brilliant guide Hana Bendcowsky began the walking tour by teaching us a word: balagan.  It’s kind of a slang word, she explained, used by everybody in the region no matter what language you speak, and it means something like “chaos.”  Our English word “balcony” is related—as in the place where you step outside to throw out the trash.

From my professional standpoint, that seems to be an accurate way to describe institutional Christianity and religion in general, but we young Free Church Christians from America really have no idea the thousands of years of institutional balagan that, layer upon layer, make up the Christian presence in the Old City of Jerusalem.

Of course the epic expression of just that is the Church of the Holy Sepulchre, the church that currently stands on the spot where many generations of Christians believe Jesus died, was buried, and rose again.  The church itself is shared by different Christian groups in an arrangement that is too convoluted to try to explain here (and which, I’m fairly certain, the people who share the church do not understand themselves).  Basically, it’s a lot of territorialism and a determination to keep things exactly the same forever and ever and ever.

You know, typical church, just with a lot more incense and candles than I’m used to.

We moved from true Christian bagalan into the Jewish quarter of the city and ended up at the Kotel, the Western Wall.  This holy site is just as fraught as the Christian sites, with men and women separated and disputes swirling about who gets to pray when and where at the wall.  Still, it was there that my day ended with a few moments of holiness, when I put my hands on the wall and thought of all the many pray-ers who had done the same before me.  Then I tucked into the wall a small piece of paper with prayers for people I love scribbled on it. 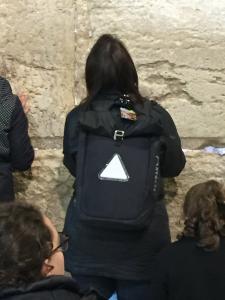 I thought again about how we humans long so desperately to touch the divine.  And by our striving, we climb all over each other and hurt one another and end up doing everything we can to keep God far, far out of reach.

In that holy, balagan place all I could think was the real miracle is that God always manages to find us anyway.

January 13, 2018 #HolyWomenHolyLand: Triumphal Nationalism & Secret Longing…the Powerful Words of Israeli Women
Recent Comments
0 | Leave a Comment
"Any updates with the blog ?"
Stanley Sabbath as Radical Witness
"I really, really, really liked this article. Thank you. ♥"
maguilar9855 When God Gets Political: Enough
"To the author/researcher: I am wondering if you uncovered a time when, as Dr. King ..."
Judith March Hardie MLK at The Riverside Church in ..."
"Church is boring."
Ivan T. Errible Sabbath as Relationship
Browse Our Archives
Related posts from Talk with the Preacher