One of the many obliga . . . , uh, joys of parenthood is attending recitals. 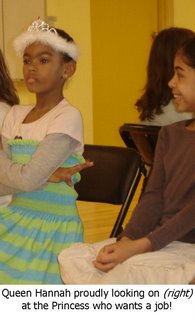 We had a little different experience Saturday. It was not the typical piano recital (though we also have, uh, get, to attend those as well).

No, our daughter Hannah is particularly gifted in the dramatic arts (pause here for anyone who knows her to shout, “Amen!”) and has been taking an acting class every Saturday for the past few months. Yesterday was the final class and parents were invited to come watch.

The class showed us an exercise they often do called improvisation. Each person was assigned a character and the teacher called out changing circumstances or situations, asking each character to respond as that character would. The first part included the parents getting up to interact with the characters around the room.

Hannah was, fittingly, the Queen. I curtsied to her and got a good laugh out of her regal response, then moved down the line to greet the Princess and the King. As I was bowing to the King I heard the man next to me say to the Princess:

“Since you are a Princess, does that mean you are looking for a Prince?”

My daughter, the Queen, piped up with great disdain:

November 15, 2006 Saying No to Jesus
Recent Comments
2 Comments | Leave a Comment
Browse Our Archives
Related posts from Talk with the Preacher