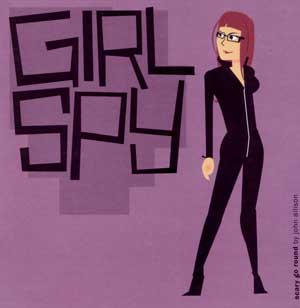 I’ve never claimed to be an expert at espionage, so I’ve been rather puzzled by the fact that recent events have proven hilariously funny to my children. The long and short of it is this: I am a terrible stalker.

I just hate to be sub-par at any task I take on, but I would like to point out that there’s probably a reason (or three or maybe even four) that I am in a profession where I try to get people to pay attention to me. I really don’t need anybody to speculate about what that reason might be (thank you very much) but, whatever it is, I’m thinking it may be the explanation for recent failed attempts at stalking my children.

Last week was the first week of school with all the accompanying drama. Because we’re in a transitional time waiting for our house project to be finished, we’re living with friends outside the kids’ school district.

(As an aside: quite a lot might be written about why it is that I have 3½ degrees from institutions of higher learning and I still could not, for the life of me, figure out how my children might possibly get a school bus home in the afternoons . . . but that’s a whole other issue.)

Because of the transportation tangle it was finally concluded that the children could meet up after their respective schools dismissed, walk to a city bus stop, ride one bus a few stops, exit said bus to cross the street, wait for and board another city bus, ride it for two stops and walk home.

On the first day of school I met them all at the assigned rendezvous. All four of us trudged up the hill to the bus stop and sat in the baking sun for 30 minutes until the bus came. Fumbling for change, we all got on, paid our fares (all four, one at a time), requested transfers and rode to the appropriate stop. We then disembarked the bus, carefully crossed the street and waited another 30 minutes for a second bus . . . rode it, got off at our home stop and walked home. Whew!

But even after all that, I couldn’t sleep thinking about what might happen. How could my vulnerable little angels possibly manage on their own at their young ages (9, 10, 13)??!? They are so little . . . and making them take a city bus is such a lame mother thing to do. What if they couldn’t remember which bus to take? What if they met a mean bus driver? What if . . . you know, all those thoughts.

So I decided right then and there that I’d let them think they were riding the bus on their own Tuesday . . . but I’d park on a side street to watch. You know, just to make sure everything went well.

4:15 p.m. Tuesday saw me on their tail. (Or would that be tails?) Anyway, parked across the street from the bus stop, dark sunglasses in place I watched from afar as Hannah did her best to annoy her brothers with snotty comments and they did their best to injure her enough to hurt but not enough to get in trouble.

In other words, they were behaving totally normally, not a hint of worry anywhere that I could see.

They paused this behavior briefly to board the bus when it arrived, which was my cue to speed off to the transfer stop to resume my stalking. Again, I parked on a side street, donned the dark glasses and peered at them from behind the sermon notes I was reading. Hannah was still harassing. The boys were still itching to punch her . . . things were so normal, in fact, that I kept looking for any sign of anxiety, insecurity, fear. There were none that I could see.

Feeling rather reassured that all my worrying was in vain, I went back to studying for the sermon.

Suddenly I noticed, out of the corner of my eye, Sammy standing at the sidewalk’s edge, hand shading his eyes, peering directly at me. I slid down in the seat and raised my folder, but when I peeked out from around it I could see that Sammy was now joined in his scrutiny by Hannah, who was pointing. They were calling Hayden over and I was sinking lower into my seat just as the bus arrived.

Once they were safely on I started the engine and sped toward home. I barely made it in the door when the kids got in themselves.

After a few introductory scornful comments (“Hey Mom, don’t you have anything better to do than to follow us around?”) Hayden marched to the telephone, dialed his Dad at work and proclaimed: “Hey Dad, guess what? Mom is the lamest spy EVER!”

So I’m thinking I’ll put off espionage training for now and stick with sermon prep. If they were smart enough to uncover even my stealth spying, well, it seems to me they can probably handle the bus themselves, after all.

September 6, 2007 Laundry and the Type A Personality
Recent Comments
6 Comments | Leave a Comment
"I really, really, really liked this article. Thank you. ♥"
maguilar9855 When God Gets Political: Enough
"To the author/researcher: I am wondering if you uncovered a time when, as Dr. King ..."
Judith March Hardie MLK at The Riverside Church in ..."
"Church is boring."
Ivan T. Errible Sabbath as Relationship
"Well, you savor your specialness!"
Ivan T. Errible Sabbath as Relationship
Browse Our Archives

8 Things Christians Need to Stop...
All Set Free
Related posts from Talk with the Preacher