What Kind of Strange Place is This, Anyway? 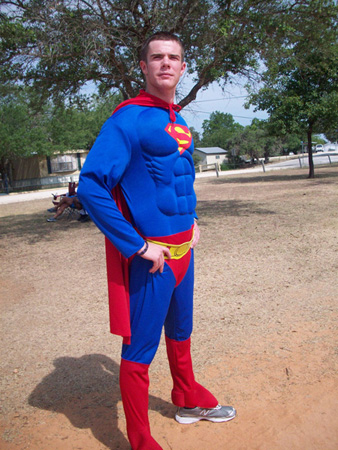 We affectionately call our community the Zoo, mostly because you never know what might happen when you show up for worship at Calvary Baptist Church.

In the seven years I have been here, for example, we have had arrests in worship, the fire alarm going off during the sermon, complete failure of the sound system, visitors with tambourines, etc.  One notable Sunday last summer, a visitor came to worship . . . in full superhero regalia.

So, while we would be the last people in the universe to declare that we’ve seen it all, you can see that it takes a lot to get our attention around here.  We often answer questions about the strange things that can happen here with a sigh and the lament, “Just another day at work . . . ,” but don’t let us fool you: we wouldn’t trade it for the world.

I was thinking about the strange paradox of the holy and ridiculous and how they so often collide here at Calvary the other day when I read part of the book I’ve just finished, This Odd and Wondrous Calling.  It got me thinking that maybe “the zoo” is really a tangible, living theological illustration of God’s transforming work in the world.

And, wait a minute . . . isn’t that what the church is supposed to be anyway?

This story reminded me of Calvary:

Welcoming the stranger can be messy in other ways, too.  One of the men who stayed at the church for a time was a fellow named Bernie.  Bernie was very bright and well-educated.  And when Bernie played a Beethoven sonata on the piano in the sanctuary you might think you were in a concert hall.  But he also had Tourette’s Syndrome, a rare disease that causes those who suffer from it to burst forth with involuntary exclamation, sometimes obscenities or something similarly inappropriate.  In Bernie’s case, he would bark like a dog and very loudly.  The sound he made was distinctively a bark, but Bernie had a way of letting the bark transition into a terrible coughing spell, which he probably learned to do to cover up the barking sound.  So the first time you heard him, you might think, “Did he just bark?”  But then Bernie would bark again, as he did frequently, and the sound was unmistakable.

Due to his unusual disability, Bernie could not hold a job.  His family couldn’t handle it and turned him out.  Yet in spite of his affliction, Bernie was not one of the most difficult of the homeless men to have around the church.  But then one day Bernie decided to join the choir.

I must confess that the first time I saw Bernie put on a choir robe and process down the aisle, my first thought was not, “Thank you, Jesus.”  No, it was more like, “Jesus, you’ve challenged us enough by sending someone like Bernie to us, but then you give us teachings like the Parable of the Lost Sheep that limit our options on how to deal with him.”  So Bernie sang in the choir—and he had a beautiful voice when he wasn’t barking.  (Perhaps that experience explains why I am not as disturbed as some people are by crying babies during worship.  Once you’ve had someone bark periodically during your sermon, everything else seems to pale by comparison.)

As you can imagine, there was a lot of discussion about what we should do about Bernie, but in the end we decided to do nothing.  He stayed with us and sang and barked for a couple of months.

But here is my favorite memory from that whole experience: After a few weeks members of the church became so accustomed to Bernie’s periodic outbursts that they weren’t as much of a disruption.  So when visitors came to worship and they heard this strange sound from the choir loft behind the pulpit they would first try to see where it was coming from.  Then they would look at the church members seated around them and notice that they didn’t seem to be in the least disturbed.

When visitors noticed the lack of response from the church members they would get uneasy—almost panicky—looks on their faces that said, “What kind of strange place is this I’ve wandered into?”  I have concluded that this is one of the highest compliments a church can receive.

March 14, 2010 We All Get Lost
Recent Comments
3 Comments | Leave a Comment
"Any updates with the blog ?"
Stanley Sabbath as Radical Witness
"I really, really, really liked this article. Thank you. ♥"
maguilar9855 When God Gets Political: Enough
"To the author/researcher: I am wondering if you uncovered a time when, as Dr. King ..."
Judith March Hardie MLK at The Riverside Church in ..."
"Church is boring."
Ivan T. Errible Sabbath as Relationship
Browse Our Archives
Related posts from Talk with the Preacher