Some Thoughts on Starting Over. Again.

I freely admit that, along with the rest of the world, I stood in line to join the gym last week. I could offer many (valid, in my opinion) explanations for why I didn’t join the gym in, say, July of last year, but I’ll save the excuses for later in the year (when I suspect I’ll really need them).

I hate to be so cliché as joining the gym the first week of January, but it’s a new year, fresh start and all of that. It seems natural with the turn of the calendar, to think about this ever-ongoing human process of becoming, of trying to actually live into the best expression of our individual humanity.

Have you ever noticed that every year this new-year-resolution-starting-over theme intersects with the lectionary Sunday where we read about and remember the baptism of Jesus? I don’t know whose idea that was, but it struck me this year that, from a spiritual standpoint, that’s a pretty powerful overlap.

Observe: As each one of us turns the calendar to a new year, grimaces with chagrin at what we have not become in the old, and — if we’re brave — begins to imagine again what our best selves might be, we’re accompanied by Jesus, who is kind of making a new year’s resolution, too.

Along with all the rest of the folks in Jerusalem and across the Judean countryside, Jesus traipses out to the river to stand in line and get dunked by John — a new start, a courageous beginning, a powerful act of hope. 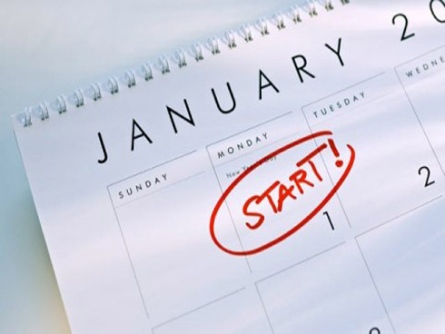 I have to think that Jesus didn’t do that because he was smugly following a formula for becoming the Savior of the world, as he always knew he would be, and didn’t have one hesitation or fear about who he was or whether he could accomplish the task ahead of him.

I think it was probably something more like: I think this is what I’m supposed to do. I’m not sure how, exactly. Heck, I don’t even know if I can. But it’s a new day — and, if the process of becoming who I was meant to be has any chance of happening at all, well, I have to start somewhere.

So that’s what he did — stood in line on the muddy banks of the river and took his turn getting dunked. The text says what followed was a naming, a blessing: the heavens opening up and God’s voice speaking louder than all the doubts and fears and even excuses, reminding Jesus who he was meant to be. I’d also like to think that in the days that followed, when throwing in the towel became the obvious next step, that the memory of that blessing got him through.

I did not, actually, hear the voice of God when I joined the gym last week. But I did have the thought that the God who animates our lives is a God who is always inviting new beginnings, even after repeated failure: get up, try again, start over, I want you to live into the best expression of who I created you to be.

I don’t know if this theological reflection will help in the weeks ahead, but it’s a new year, so I’m thinking it’s worth starting again.

This essay was published first at Baptist News Global.

January 19, 2015 Dreaming
Recent Comments
5 Comments | Leave a Comment
"Any updates with the blog ?"
Stanley Sabbath as Radical Witness
"I really, really, really liked this article. Thank you. ♥"
maguilar9855 When God Gets Political: Enough
"To the author/researcher: I am wondering if you uncovered a time when, as Dr. King ..."
Judith March Hardie MLK at The Riverside Church in ..."
"Church is boring."
Ivan T. Errible Sabbath as Relationship
Browse Our Archives
Related posts from Talk with the Preacher