This post was written in January, 2006.  The second grader referenced below is now an eleventh grader.  But I still think his art is cute.

Just for a little contextual reference I’d like to tell you that I clearly remember hot controversy the fall I entered kindergarten. The parents were talking in hushed tones, I remember, about “busing” but it didn’t mean much to me–all I knew was that this very cool new part of my life meant I got a shiny new lunchbox and finally, to ditch my annoying younger siblings and go to the pinnacle of all experiences . . . elementary school.

Yes, that was pretty much my introduction to Civil Rights through the school system. Martin Luther King, Jr. Day wasn’t celebrated anywhere then, and the formal designation “Civil Rights Movement” was pretty new.  Times have changed, though, and I know this because I am, once again, in elementary school.

Well, I am not technically IN second or third or sixth grade, but as any parent of a school-aged child knows, if they’re in school, well, you are, too. Science projects, research papers. Homework packets, class parties. After-school enrichment, state testing. Today we’ll be spending some time creating a real Mr. Potato Head with an accompanying story of his life, for example. (Can’t wait!)

So I feel that I am fairly qualified to say that Martin Luther King, Jr., has become a very prominent topic of study and discussion in “my” elementary school. Much, much more than my first time around. My children know who he is (not sure I did my first time in elementary school); they know what he said; most importantly, they know what he stood for.

Witness this conversation I had just the other day:

“And did you know he looks EXACTLY like the dad on Fresh Prince of BelAire?”

Knowing something and being changed by that knowing, of course, are two different things. So I’ve been listening closely to see whether or not all this Civil Rights education is really changing my kids, really helping them look at the world in a different way.

The answer came for me the other night at dinner. I was taking a poll of how the kids wanted to spend Monday . . . no school, no work, a whole free day (except for the real Mr. Potato Head project, I have since discovered)! Truth be told, I was gearing myself up to hear an urgent request to see Cheaper By the Dozen Two or some other cinematic expression of hell. 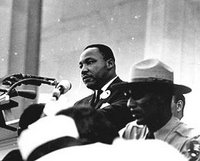 Instead, my second grader looked thoughtful for a minute and said, “You know, I think it would be so cool to go to the Lincoln Monument. Then, we could park the car and climb up all those big steps. Then, when we get to the top, we could go over right to the very place where Martin Luther King, Jr. said his speech about having a dream. And we could remember that he thought everybody should be treated the same.”

Oh, our educational system has come such a long way. So much further than I’d ever dreamed.

But maybe this was the kind of thing Dr. King was dreaming of all along. 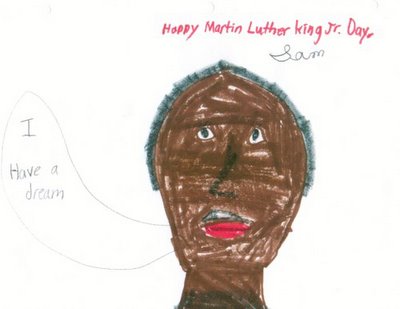 January 13, 2015
Some Thoughts on Starting Over. Again.
Next Post

January 20, 2015 MLK at The Riverside Church in the City of New York
Recent Comments
0 | Leave a Comment
Browse Our Archives
Related posts from Talk with the Preacher