Sermon: The Disciples’ Conclusion: Jesus Must Be God’s Son! 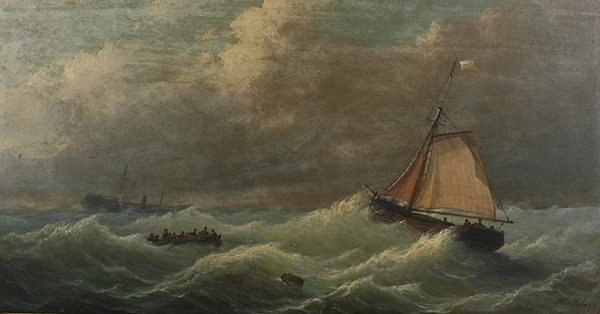 Reverend Tom Truby shows that mimetic theory is a powerful tool that enables pastors to preach the Gospel in a way that is meaningful and refreshing to the modern world. Each week, Teaching Nonviolent Atonement will highlight his sermons as an example of preaching the Gospel through mimetic theory.

Mimetic theory teaches that we are highly influenced by the people and culture around us. The is especially true when it comes to emotions like fear. Fear is mimetic; it spreads like a contagion. In this sermon, Tom shows how Jesus comes to us, like he came to the disciples lost in the storms of the sea, and says, “Be encouraged. Do not be afraid.”

The Disciples’ Conclusion: Jesus Must Be God’s Son!

Did Jesus know a storm would be coming when he made his disciples get into a boat or was he just desperate to have some alone time? He still hasn’t worked through his grief and thought through the meaning of John the Baptist’s death. He put that aside while he responded to the needs of the crowd who gathered in the wilderness to hear him.

Why would he need time by himself? For that matter, why do we need time by ourselves, time to pray, time to think, to feel, to face our emptiness or to bring our emptiness to God? I think we need time alone because we often can’t think straight when we are with others. All humans emit a gravitational pull, a relational influence, a force field that impacts the thoughts and feelings of those around them. Maybe some of us are less influenced than others but all of us are influenced.

Maybe that’s why we value the open spaces so much. It’s easier in them to get away from the crowd and think our own thoughts and feel our own feelings. Pastors and priests are urged to take frequent retreats so that they won’t lose touch with the quiet voice of God in the energy field of their parish and family. All humans are very social, even the antisocial ones are pivoting against other humans.

For the past couple of hundred years it has become popular in the west to think of ourselves as primarily individuals and to undervalue the power of our relationships. For example, we think our desires; what we want to do and have and be comes from some reservoir in the middle of our chest or brain or gut and we have just got to find our way in there to discover it. So people have to “find themselves” and the bachelorette has to follow her inner feelings and trust them as she decides on the perfect man for her. If I were her I would be spending time by myself and praying. I would be asking God, who is outside our whole mimetic mess, for help in discerning what to do next.

This idea that we have the secret knowledge somewhere in us and it has nothing to do with the pull others have on us, René Girard calls “the romantic lie.” This is why Jesus must get by himself to think his own thoughts, to hear what the quiet voice of the Spirit has to say, to tune into the non-invasive, non-coercive, non-violent presence of God. He knows John’s death has deeply disturbed him but he hasn’t had the time or opportunity to process it. He needs to be by himself, outside the force field of the disciples and the crowds, and he needs to pray.

So “Jesus made the disciples get into the boat and go ahead to the other side of the lake while he dismissed the crowds. When he sent them away, he went up onto a mountain by himself to pray.” On the mountain he is beyond the gravitational pull of the disciples who will want to pull him in one direction and the crowds who will want to pull him in another. What does God want him to do? He is looking for direction that has a wider base than the competition of competing claims. This direction is always God’s will for God is each and all.

As the Biblical story unfolds, “Evening came and he was alone.” I suspect things were coming clear for him, he was feeling better, a way forward was opening.

While Jesus was working this out, the disciples were in the midst of a storm on the Sea of Galilee. “The boat, fighting a strong headwind, was being battered by the waves and was already far away from land.”

Matthew is telling us a story. He is not sharing concepts or philosophical abstractions. He is using an action story so that we can feel with it.

Have you ever felt like you were in a small boat on a raging sea? The wind howls, the air is filled with driven water, soaking your cloths and chilling you to the bone. In darkness you bail frantically as you feel the water rising, threatening to swamp the tiny craft that separates you from chaos and death. The wind fights you as you go against it and you have gone too far to turn back. You and your little group feel alone and lost.

Could this story be a foreshadowing of how the disciples will feel when Jesus is on the cross and in the grave and they are still alive and in hiding? Could this be what they will go through before he makes his appearance after his resurrection? The parallels are interesting.

Jesus has ordered them to go to the other side since what he must do only he can do and he must it do alone. The crucifixion is like the storm that has erupted on the lake. The power of evil threatens their fragile boat and appears overwhelming. The storm howls with hatred and words like “crucify him.” Its violence stings their faces and fills their boat with dread. They do all they can but it’s not enough. They find themselves alone in their fragile boat they call their lives as their world descends into chaos. They seem to be going against the winds of history, of reality, of powerful peoples will.

We have conjectured that Jesus, on the mountain, has just realized what John’s death means for him. Jesus will offer his life to the human violence that killed John the Baptist, only this time, Jesus’ death will reveal the source of human violence and a way away from it. It’s clear nowthat crucifixion is the only thing that can communicate the depth of the human problem and the depth of God’s love in response to it.

“When the disciples saw him walking on the lake, they were terrified and said, ‘It’s a ghost!’ They were so frightened they screamed.”

Ghosts are menacing, they come to haunt us, to remind us of what we have done to those who are now dead. The disciples see something they don’t understand coming toward them and they project their fear onto that figure and scream.

Is this how the disciples felt when Jesus returned to them after his crucifixion? Was he like a ghost accusing them of desertion, betrayal, disloyalty, cowardice and murder for letting it happen? Even Peter who said he would never betray Jesus did. They all failed and now Jesus was surely returning to punish them. But he didn’t. Instead he said “Don’t be afraid.”

“Just then (as they were screaming in terror) Jesus spoke to them, ‘Be encouraged. It’s me. Don’t be afraid.’” At root this is always his message. He allowed himself to die at our hands so that he could meaningfully say this to us. Even though we killed him still he tells us to “fear not.” He knows that revenge, retaliation, getting back or getting even do not even exist in God’s vocabulary of love. So with this as the frame we read the rest of the story.

Then Peter got out of the boat and was walking on the water toward Jesus. 30 But when Peter saw the strong wind, he became frightened. As he began to sink, he shouted, “Lord, rescue me!”

31 Jesus immediately reached out and grabbed him, saying, “You man of weak faith! Why did you begin to have doubts?” 32 When they got into the boat, the wind settled down.

33 Then those in the boat worshipped Jesus and said, “You must be God’s Son!”

August 17, 2017 What Trump Got Right About Charlottesville
Recent Comments
0 | Leave a Comment
Browse Our Archives
Follow Us!