Blood Sport in “The Lonesome West” 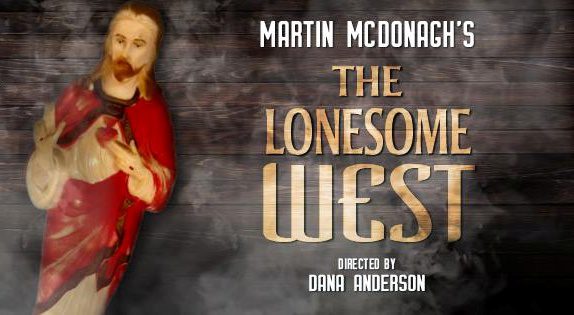 AstonRep Theatre Company’s production of The Lonesome West, a dark comedy by award winning playwright Martin McDonagh, is a timely treat for Chicago audiences. Set in a disturbingly violent town in Western Ireland called Leenane, the “lonesome west” of the play’s title, Leenane is the lead character, the silent star of the show. Most critics focus on the depravity, cruelty and violence of the characters but that is to miss McDonagh’s point. This play is less about the individuals and much more about the disintegration of a town in which the moral center no longer holds. Though first produced in 1997, this Irish play has surprising resonance with the current cultural climate in the US. American audiences may laugh out loud at some of the more outlandish pettiness, cruelty and violence, as they should. But accompanying the laughter is an unsettling recognition of our own cultural moment, laced as it is with anger, accusations and self-justifications that mask our own cruelty to one another.

A Crisis of Faith

Early in The Lonesome West, Father Welsh is visiting the home of two brothers, Valene and Coleman, immediately after their father’s funeral. He tells Coleman, “I’m a terrible priest” and Valene quips, “He’s not having another crisis of faith?” and we learn that this may be Father Welsh’s twelfth faith crisis this week. Given the alarmingly violent parish that the poor man has been assigned to, prone as it is to outbreaks of petty resentments, cruelty, shouting matches, alcoholism, rumor mongering and murder, it’s no wonder that he has doubts about his effectiveness. Folks carry on without confessing or repenting or even offering the feeblest of apologies. Father Welsh wonders how they can attend mass, listen to his sermons and yet continue to sin without ever doubting their own goodness.

His conclusion is that he is not a very good priest, which may be true. But Father Welsh’s problem is bigger than just one man; it’s the problem faced by every man or woman who commits themselves to love not hate, to mercy and not violence. The problem is this: love cannot be coerced or punished into existence. Love can only bear witness to itself in hope that it will be noticed amid the loud, angry tantrums that hate is prone to.

Coleman and Valene pose a particularly vexing problem for Father Welsh. They live together, alone now without their father, left to petty squabbles and the nursing of old resentments. They fight figuratively and literally and have no sympathy for one another, can summon no ounce of compassion. Tension builds as the audience learns the horrifying truth about their father’s death, a revelation that pushes Father Welsh to make a dramatic, last ditch effort to draw Coleman and Valene into a more loving relationship.

Is Forgiveness Even an Option?

Father Welsh’s demonstration of love is accompanied by a letter in which he exhorts the boys to tell each other “the wrongs the other has done all down through the years that you still hold against him… and then be forgiving each other them wrongs, no matter what they be.” He asks that they do it for him, “for a friend of yeres, who cares about ye, who doesn’t want to see ye blowing your brains out of each other, who never achieved anything as a priest in Leenane, in fact the opposite, and who’d see ye two becoming true brothers again as the greatest achievement of his whole time here… I have faith in ye. You wouldn’t be letting me down now, would ye?”

This exhortation might well be read as a direct appeal to those of us today who are caught up in our own political bickering over past wrongs. In the wake of the Kavanaugh confirmation fight and heading into midterm elections, we must ask ourselves whether it is worth holding on to the past. What passes for political discourse is Republicans and Democrats playing the “you started it” game over important things like holding up judicial appointments, excusing the moral failings of our politicians, or claiming to be on the side of the real victim in any given situation. I could not help but see the end of the play as a portrait of American civic life as the brothers turn apology into a competitive blood sport. Is there anyone today with the authority to exhort us to really forgive one another? Who could write a letter that would prompt us to genuinely apologize?

In 2017, twenty years after The Lonesome West, McDonagh released his film, Three Billboards Outside Ebbing, Missouri. There is a lone Catholic priest in this story, too, but he is lectured into silence by the Frances McDormand character. She condemns him for his complicity in the abuse of children by the fact of his being part of the clergy, or the gang, as she puts it. So much for the church’s moral authority.

With priests silenced by their own moral failures, McDonagh needs to find another character to be the voice of forgiveness in Three Billboards. This time it’s a secular voice, the town’s sheriff. The last bastion of moral authority in the US does appear to be the military and though law enforcement has been rightly called to account for violence against African-Americans, somehow an armed authority figure still commands our respect. McDonagh’s sheriff is a man who wears a gun but he counsels his most violent deputy to choose love and abandon violence. Perhaps advice McDonagh hopes all armed forces will take to heart.

Writing a century ago about the proper exercise of parental authority, Dr. Maria Montessori made this observation about abusive parents and human nature in general: “We would rather make a mistake than admit it.” And so when our faults are pointed out to us, she writes, “we find it easy to excuse them… And little by little we convince ourselves of the truth of what our conscience knows to be patently false and which becomes daily more difficult to correct.” Dr. Montessori’s life was animated by hope that parents could face the truth about themselves and put their children’s need ahead of their own selfish motives. Both The Lonesome West and Three Billboards end with very faint flickers of hope that the characters who receive the letters will be able to change their ways. Whether they will find a way from blood sport to genuine forgiveness is left to our imaginations. If we can imagine it for them, maybe we can imagine it for ourselves.

Attend the 3:30 p.m. matinee of AstonRep’s The Lonesome West at the Raven Theatre, 6157 N Clark St, in Chicago then join Suzanne Ross and members of the cast for an engaging and enlightening post-show talkback. Purchase your tickets today.

The Mark of the Beast: some...
slacktivist
Related posts from Teaching Nonviolent Atonement