The One Thing: My Dad, City Slickers, and Participating in a More Just World 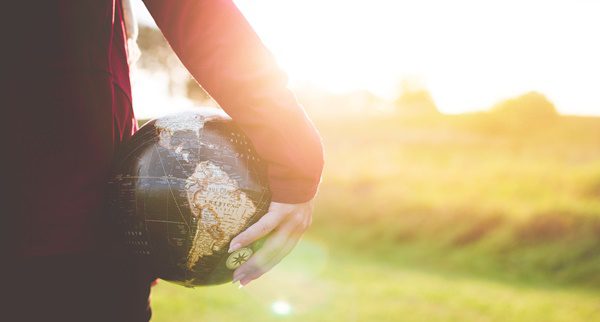 The following is a sermon I preached at Clackamas United Church of Christ, near Portland, Oregon.  The primary scripture text was Luke 10:38-42. You can read the text or watch the video below.

I turned 40 this last year and my dad turned 80. My wife and I decided to take a family trip with our children and my dad on a birthday celebration to London. We had only one thing we wanted to do: spend quality time with my dad.

My dad loves London. He was an English professor and specialized in British literature. Every other year during the month of January he took a class to London to read books by British authors like Jane Austen, Charlotte Bronte, and Shakespeare.

To give you a sense of just how hardcore my dad is when it comes to British literature, when I was growing up he had a bumper sticker on his car that said, “I’d rather be reading Jane Austen.”

So we got through the plane ride to Heathrow airport. From there, we took the London Underground transit system to the air b & b where we stayed.

As we “minded the gap” and stepped inside our first train, my dad was smiling from ear to ear. He clearly loved it. At one point during that first ride, he looked at me and said, “I love the underground. I know I’m in London when I’m in the underground. It feels like home.”

He was so happy. Which made me so happy. And I thought, “This is exactly the reason that we came.”

We arrived on a Wednesday and throughout the week we rode the underground as much as we could to see the sites and museums and theater performances. We rarely took a bus, because my dad was so happy riding the underground.

On Sunday, my dad and I decided to spend some father-son bonding time together by going to the worship service at Westminster Abbey. We walked to the Underground station near our air b & b and wouldn’t you know, the station was shut down for the day due to maintenance! In fact, the entire yellow line was not operating! Oh no! My anxiety increased. What were we to do? We were going to be late to church! Oh the embarrassment!

I took out my smartphone and opened up Google Maps. I typed in Westminster Abbey and within seconds I had the quickest route to the church. Two bus stops would get us there in 20 minutes, just in time!

We took the first bus, and within ten minutes we were a station where Google told us to pick up the second bus that would get us there in 10 minutes. But guess what my dad saw at the station? An Underground railroad. My dad said, “Oh, let’s take the underground.”

I rolled my eyes but followed along. Instead of taking one more bus and getting there on time, we took an underground line this way, and then we took another line that way, and then after a little more than 20 minutes we were there, about 10 minutes late.

Admittedly, I was a bit annoyed. I had it all figured out. Google maps has never failed me and I was getting anxious. I didn’t want to go through the embarrassment of being the American tourist who shows up late to church!

But then as we rode the different underground lines, I remembered why we traveled all the way to London with my dad. It was for only one thing. And that one thing was not to show up to church on time that Sunday morning. The one thing was to enjoy this time with my dad. And anything that got in the way of that enjoyment was a distraction from the one thing that really mattered.

Which leads us to the obvious next segue in this sermon – the movie City Slickers. How many of you have seen City Slickers? It’s about a man named Mitch from Manhattan who just turned 39 and is going through a mid-life crisis. As Suzanne Ross writes, Mitch seemingly has everything anyone would want, but deep down he knows he is missing something. So he and his friends decide to search for the meaning of life by spending two weeks at a cattle ranch in the West.

Mitch meets a cattle rancher named Curly. While they ride a horse, Curly says to Mitch:

Do you know what the secret of life is? [He holds up one finger and says] This.

Curly responds, “One thing. Just one thing. You stick to that and the rest don’t mean … here Curly uses a word that is NSFC. You know, Not Safe for Church.

Mitch replies, “But what is the ‘one thing?”

“That,” Curly answers, “is what you have to find out.”

As the movie continues, Mitch helps a cow give birth. The scene is very gross, but also beautiful at the same time. The calf shoots out of its mother and lands on Mitch, who is proud of his new calf birthing abilities. Mitch names the calf “Norman.” He and the calf Norman develop a sweet relationship. Mitch even saves Norman’s life on multiple occasions. It is through Norman that Mitch discovers the “one thing,” which is how to receive love and give love.

This is the spirituality of City Slickers and it’s the spirituality of Jesus. In our Gospel reading today, Jesus travels through a village and meets a woman named Martha. Martha invites Jesus and his disciples into her house and Martha immediately gets to work providing hospitality to her guests.

Jesus began to teach while Martha prepared for her guests. Martha’s sister Mary decided to sit at Jesus’ feet and listen to his teachings. In first-century Judaism, the only people who sat at a rabbi’s feet were his disciples. Luke has maybe the most feminist agenda of all the Gospels. He tells us that this woman named Mary was a disciple.

Martha, who was working so hard to show hospitality to her guests, understandably became resentful of her sister Mary. Why wasn’t Mary helping with the chores of hospitality?

So Martha went to Jesus saying, “Lord, do you not care that my sister has left me to do all the work by myself?”

Martha invited Jesus to join her in resenting Mary. But Jesus wasn’t having any of it. He said to Martha, “Martha, Martha, you are worried and distracted about many things; there is need of only one thing. Mary has chosen the better part, which will not be taken away from her.”

In this story, Jesus does not explain what the “one thing” is. But in the previous story, someone asked him about the most important thing in life. Jesus responded, “You shall love God and you shall love your neighbor.”

And I have to tell you, I have a lot of sympathy for Martha. Loving family members can often harder than loving strangers. I can easily become resentful toward family members, especially those family members on the other side of the political aisle.

During these times when people are chanting “Send her back” at political rallies, we are reminded that, like Martha, we have work to do. But also like Martha, we can become distracted from that good work when we base it on resentment or hatred towards others.

Because to be against others is not enough. In fact, being against others is usually a distraction from the one thing that truly matters – to add more love and hospitality and grace into this fractured world. The great challenge from Jesus is to love our neighbors, who include even our enemies, and even our family members as we work for a more just and loving world.

And we can trust that there are so many other people like us dedicated to this work. For example, when my dad and I worshiped at Westminster Abbey on that Sunday morning, it was their annual City Worship Service. They had Jewish, Muslim, Hindu, Buddhist, and Sikh leaders deliver prayers during the service. Then during the sermon, the priest proclaimed that God loves people of all religions, all colors, and all sexual orientations. I wanted to stand up and yell, Preach it, brother!

I tell you this because sometimes we can feel alone in this work. But I want you to know that there are churches throughout the world delivering the same Gospel message that we proclaim – God is love. God loves us unconditionally because God loves all people unconditionally. Our job is to simply receive God’s love so that we can do the one thing that really matters – receive God’s love and share it with others as we work for a more just world.

May we choose the one thing today and forevermore. Amen.

July 19, 2019
Jesus Unmasked: The Priority of Love
Next Post