Messages from the Crossroads: Changing Words, Changing You

This past weekend at ConVocation, Nathaniel and I presented our offering “Hekate at the Crossroads.”  This ritual has become something of a pattern in our lives, yet its motif is fluid and ephemeral.  Every single time we do it, the ritual is different.  The location, the time of day, the year, and most especially all of the people who participate in it have an effect on how the ritual will take shape.

After every time we do Crossroads, Nathaniel and I try to analyze the differences and our own experiences. We have now done it at least 6 times since Spring of 2016 at Paganicon.  Yet both of us are working under a state of trance or possession if you will, so what we’re aware of can be rather limited…or more specifically, highly focused.  I am hyper-aware of the people of the room and how they feel, but I don’t really “hear” the music being made on the spot.  Nathaniel is somewhat watching me move, but he’s getting more specific directions from Her.  There is no set agenda or schedule.  We simply create the space with sound and the simplest of visuals, and the web is woven from there.

People have shared with me their experiences in person and email, but I’ve yet to receive one that covers the entire experience in as such exquisite detail as Beth’s over at Guild of the Gods. Just a small taste (take a few minutes to read the entire passage at the link): “Never had I truly seen Hekate, not in vision nor in images, but now – I SAW her. She was embodied to me, dancing in and slowly out of Her veils, as we breathlessly watched. She moved, a living mystery, surely more divine than human, until finally, eventually, the final veil fell.”

Beth’s experience made me go back and think about each of the times we’ve done this ritual.  I thought about what I felt the major message was for each one.  Because it has definitely shifted from ritual to ritual. Static or more traditional rituals tend to have a specific structure and with a focused intended result. Much like the scientific method, there tends to be a repeatable, reliable process that brings an expected response. But what we’re doing leaves a lot of room for structural change and possible results every single time. Living deity is never static, nor are the times we live in, so it makes sense to leave room for change.

The first ritual in 2016 started off more like a performance, had a sort of semi-oracular Q&A session, then people were inspired to get up and move with us. It happened in the middle of the day, in a medium-sized windowless hotel ballroom – so time and place seemed to shift easily out of order. The message seemed to be “the sacred is here, it is among you, it’s in the people around, it’s you.”  People left a bit breathless, inspired, and invigorated.

The second ritual took place at Pantheacon, in February 2017.  11pm on a Sunday night in a giant ballroom, and S.J. Tucker joined us to read the welcoming message and lend her voice to the harmonies. Over 200 people moved in that space, and we gathered at the end of a dance in a large pile of warm present bodies, leaning close to each other.  An oracular session took place, and the main message was a call to power, to be prepared to fight for yourself and for others.

The third ritual took place at Pagan Spirit Gathering, in the middle of a sunny afternoon outside in the ritual space by the lake. We had more live music, but the space limited how much we could move, and the sun didn’t exactly lend itself to dark revelations. Instead of a central gathering, the goddess visited each person in turn, with eyes and hands. An envelope of quietude folded over each person. There was talk of power, but the message focused more on self-acceptance and acknowledgement as well as recognizing and embracing a larger sense of community.

The fourth ritual was at Many Gods West in Olympia, WA.  Another evening ritual, the goddess as a triad embodied through myself, Anaar, and S.J. Tucker.  Despite the large number of people gathered, the goddess insisted on visiting each person in turn.  The room itself breathed in time, holding the space.  To the gathered, the message was about owning and claiming your power, and to shed away that which is not needed.

The fifth ritual happened at the Alombrados OTO in New Orleans right before Halloween.  In their Temple, Nathaniel and Davis Petterson crafted music to set the evening, then after a break, people re-entered the space as it was transformed from a concert into its deepest temple self. The space became small, concentrated, like snakes passing by each other. We soared and banked and soared again, the space spiraling. This time, the message was rooted in love, to remember that you are not alone and to see the divine present in each other.

Which brings us to the sixth ritual at ConVocation.  Another middle of the day ritual, but time stands outside a darkened ballroom.  After swirling the room and bringing down words, the attendees were invited to come to the center, each on their own, as the goddess turned clockwise again and again. Eyes, hands, hearts, bodies embraced. The most profound message was the simplest of all of them: go forth and LIVE.

I am deeply honored for all of the people who shared every single experience with us along the way.  It truly is the collective present at every ritual that makes the experience what it is. And while it’s definitely an experience to be there yourself, I like to think that those who were there – share their experiences…growing the circle larger, spreading each message in their own way. 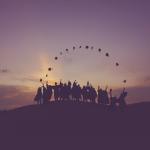 February 27, 2018
Witchcraft, Community, Events, and the Invisible Visible
Next Post 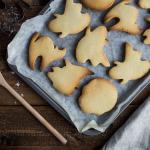 5 Ways to Get Off of...
John Beckett
Related posts from A Modern Traditional Witch