The Effect of Ghosts In The Magical Community

Deceased people don’t scare me, I’m used to those kinds of ghosts.  But there’s another kind that gives me pause. Sometimes it’s the thing that’s not actually there when they should be that’s the most dangerous to the living.

Community is built by those who show up – but what happens when prominent written voices don’t have bodies?  Especially the living kind (the dead ones of course are another matter).

Over the last month or so, there’s been some interesting discussions about “fake” books on Witchcraft.  Well, not so much that the books are “fake” – but that the authors are essentially manufactured creations of publishers seeking to capitalize on the Witch trend.  By using ghost writers and capitalizing on names similar to other established surnames  in the genre, they release a multitude of books on amazon.  Nathara of CrowSong Lodge wrote an article about her research into the topic here and fellow Patheos blogger Kelden just released a Youtube video following more on recent discussions.

I’ve seen all sorts of reactions, from people being shocked and appalled to others saying don’t condemn ghostwriters, it’s a publishing standard – that what should matter is if the material itself is good or not.  I find it all fascinating – and I could delve deeper into all of the opinions.  But I’m not going to – or at least not really.  But stick with me here, because it gets interesting.

Unrelated to all of the hubbub, my partner and I were on our way home from a lovely event this past weekend (Feast of Lights presented by EarthSpirit in Sturbridge, MA). We were talking about some of the interesting conversations we had with other folks over the weekend, as we noted it was great to see young children and groups of teenagers present. But there were missing gaps that were commented on or alluded to – mainly it seems folks in their early 20’s and 30’s were MIA  Plenty of folks from 40’s upwards.  Note: I really suck at guessing ages, but other folks confirm the general assessment.

Reflecting on this on the drive back, Nathan asked me, “where do you think those twenty-to-thirty somethings are?”

A very valid question, as it’s not unique to that festival community or this region.  It’s something we’ve been noticing for the last several years almost every place we have traveled.  Sure, there’s a couple per event, but rarely do they have the same presence as the other age groups. I’ve mentioned it before here and offered some suggestions about improving it.

That’s when my brain made a connection with those recent articles.  Irregardless of whether their content is decent, ghostwritten books can have a negative impact on the community.  How so? In the sense that the author/s, especially when a manufactured name built from unnamed contributors is NOT someone who can be seen and recognized in the community. While cults of personality can be problematic, actual role models who are walking their talk can be incredibly influential and inspiring to new Witches. When I think back to the books I started with in my teens and twenties, I could look up people like Margot Adler, Starhawk, Doreen Valiente, Raymond Buckland, and the Farrars – and find real people doing actual things in their communities. Through their schedules, I could find out about events, communities, and other resources. From their actions and doings, I could also make decisions about what or who worked better for me.

But what happens when a young person picks up one of these books written by essentially fictional personas? Even if some of the people writing the material are actual practitioners vs. folks just scouring the web and old books for material to lift – you can’t put a person to the name that you can get to know – or at least learn more about in connection to the book you just read.  I’m not knocking those magical practitioners who chose to bring extra money through ghostwriting – but it’s a shame for both them and the community that they’re not getting name credit for their work. They get rendered invisible for both the reader and the writer’s possible impact on the community.

Also to be clear, I’m not talking about anyone writing with a pen name. You can meet plenty of authors at events who use pen and craft names.

Nor am I blaming the missing generations at events on just these books. But I do think it’s an important factor to consider. As there are absolutely quite a lot of 20-30 somethings out there interested in Witchcraft – and they’re just finding it the same way many of us did: at the bookstore or online. They absolutely do want to connect with others – they’re at other kinds of events and conventions, but often don’t know to even look for things we have taken for granted. You can’t find out about events and groups from an author who is really a fox, a hare, a possum, and three ghost writers in a mysterious velvet cloak. They’re not going to be giving talks, leading workshops, running shops, or producing events. That’s not the desired end result or part of the process with these books.

And while ghostwriting may be the common thing in fictional genres, when it comes to non-fiction, it helps to know who you’re dealing with. What are their credentials and background? What are they interested in? Who are they as a practitioner? It can get really dodgy when you don’t know who’s behind the material.  Like seriously, the Bible is one of the biggest pieces of ghostwriting in human history, and look at all of the trouble that has caused. Word of “God” indeed.

You could argue that people should be more discerning about what they read.  But discernment is something that comes with time and experience.  Newcomers to any genre have little context for what to look for —outside of what’s available, affordable & likely aesthetically pleasing to them.  Rarely does someone newly interested in Witchcraft think, “hmm, I wonder if this person is a bona fide practitioner who has been honing their craft for years.” They see a book and an opportunity to learn.

Books are not the end-all, be-all of magical practice.  They are part of the process that can hopefully help guide the reader through experience. And hopefully lead them in a direction where they can find other like-minded people – not only in amino or tumblr or instagram, but in actual physical space.  With the ease of online publishing, it makes it just that much harder for newcomers to sort through the mess to find guides who are invested physically and magically in their practices and communities.

Edited to add:  Nathara has added a second article that delves even deeper into the “fake authors” that goes beyond this being about ghost writers – it’s an absolutely fascinating read, GO there! 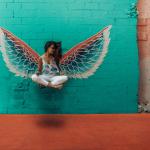 February 6, 2020
6 Minutes of Witchcraft: Don't Should Yourself (Or Others)
Next Post

February 24, 2020 Sigil Witchery: The Uplifting Sigil
Recent Comments
0 | Leave a Comment
"I honestly do not get why some people get off on spreading hate. Seriously, I ..."
Amanda Ingalls The Best Banishing I Saw This ..."
"Really great idea!"
JenniWest August is Cauldron Month (Tempest-style)!
"This seems like an interesting idea! I didn't think I had a cauldron until you ..."
Aelfrey August is Cauldron Month (Tempest-style)!
"Can I still use this sigil in 2022?🤔By the way, I love your blog!"
Carol P. Duarte The Encompassing Heart Sigil
Browse Our Archives
Related posts from A Modern Traditional Witch