As a couples therapist, I’ve witnessed firsthand the benefits of my clients learning to manage conflict, developing new skills for enhancing their relationship, and restoring broken trust. This is what can happen with the support of a skilled therapist.

A couple’s commitment to each other can be strengthened by their counseling experience and cause them to feel closer emotionally as a result of engaging in the therapeutic process. In fact, in The Science of Trust, John Gottman says that practicing emotional attunement while relaxing together can help you stay connected in spite of your differences. This means turning toward one another by showing empathy, responding appropriately to bids for connection, and not getting defensive.

What really happens in marriage counseling?

Truth be told, the effectiveness of marriage counseling is directly related to the therapist’s ability to assist couples in increasing positive interactions. In fact, in his extensive research John Gottman discovered that the difference between happy and unhappy couples is the balance between positive and negative interactions during conflict. There is a very specific ratio that makes love last.

Unhappy couples, on the other hand, tend to engage in fewer positive interactions to compensate for their escalating negativity. If the positive-to-negative ratio during conflict is 1-to-1 or less, that’s unhealthy, and indicates a couple teetering on the edge of divorce.

Further, Gottman coins the phrase ”turning toward” one another to describe how couples can learn to react in a positive way to one another’s bids for attention rather than “turning away”—which generally involves ignoring a partner’s bid, or acting preoccupied. He writes, “Turning toward one another is a kind of secret weapon against elements such as contempt, criticism, defensiveness, and stonewalling—factors that can destroy any relationship.”

In fact, a key element of Gottman’s Sound Relationship House is “Turning towards each other,” and a skilled couple’s counselor can foster this by encouraging couples to become intimately familiar with each other’s worlds and showing interest in each other so they can weather the storms of marital life.

In his book The Relationship Cure, John Gottman writes about the “Marital Masters.” He explains, “It’s not that these couples don’t get mad or disagree. It’s that when they disagree, they’re able to stay connected and engaged with each other. Rather than becoming defensive and hurtful, they pepper their disputes with flashes of affection, intense interest, and mutual respect.”

November 9, 2019
How to Be More Assertive with Your Partner By Using "I" Statements
Next Post 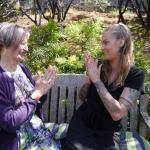 November 20, 2019 How to Co-Parent Successfully and Help Your Children Thrive
Recent Comments
1 Comment | Leave a Comment
Browse Our Archives
get the latest from
Terry Gaspard
Sign up for our newsletter
POPULAR AT PATHEOS Family
1

5 Sexy Ways to Get Your...
Ashley Willis
Related posts from Terry Gaspard

Family
7 Ways to Ignite Sexual Passion with Your...
Terry Gaspard

Family
8 Warning Signs that Your Marriage is Headed...
Terry Gaspard

Tax Day: God and Money
The famous verse in The Bible claims that we cannot serve both...
view all Family blogs
What Are Your Thoughts?leave a comment
Copyright 2008-2021, Patheos. All rights reserved.
error: Content is protected !!