It looks like poor Kitty will have to have another surgery to help clear away the second abscess that has formed from her ruptured appendix. With a fever near 102 again and her resting heartrate at 130, her doctor is re-admitting her to hospital. 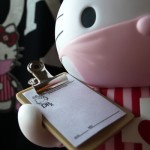 If you are inclined toward prayer, please whisper up a few for Kitty and for my son, who loves her to distraction and is being worn down, as well.

UPDATE: I suspect I will not be in a position to monitor comments or fish them out of the spam filter, so I think I will close comments, at least overnight, so no one feels like they’re being ignored/lost.

November 2, 2011 The Priest as Bridge and Balm - UPDATED
Browse Our Archives
get the latest from
Catholic
Sign up for our newsletter
Related posts from The Anchoress