Using Gosnell to Snip at Obama, or the Press? – UPDATED

Using Gosnell to Snip at Obama, or the Press? – UPDATED April 15, 2013 Elizabeth Scalia

“If these children are being born alive, I have confidence that a doctor…”

That is part of State Senator Barack Obama’s argument, in 2003, as to why he would not support any sort of legislation insuring medical care for babies delivered during botched abortions. More completely, he said:

I think it’s important to understand that this issue ultimately is about abortion and not live births. Because if these children are being born alive, I, at least, have confidence that a doctor who is in that room is going to make sure that they’re looked after.

You can listen to the argument on the floor of the Illinois State Senate here. “Looked after” is one of those vague statements that can mean anything, isn’t it?

Why am I bringing this up, now? Wasn’t all this covered, if not in the mainstream press, then at least back in 2008 when Bill McGurn and RCP and Andrew McCarthy and Ed Morrissey and I and many others online looked into it?

I can hear someone out there thinking, “Anchoress, you’re just trying to taint Obama with a Gosnell brush!”

Well, no, I’m not. This isn’t actually about Barack Obama. It’s about the press’ ability to ignore anything it doesn’t want to discuss, whatever the reason. That does touch on the Gosnell story, right enough.

It wasn’t my idea to suddenly bring up Obama’s thoughts on what ought to happen when an infant manages to survive an abortion attempt. It was actually Robert P. George, over at First Things, noting this Washington Post Fact Check which, in September of 2012 finally looked at the state “born alive” legislation and Obama’s remarks on the issue in 2003 and 2008 and found:

The evidence suggests we could have awarded Four Pinocchios to the former Illinois senator for his comments to the Christian Broadcasting Network, but that interview is several years old now, and it’s not the focus of this particular column. The president’s campaign did not respond to requests for comment on the matter of whether Obama’s 2008 comments on the Christian Broadcasting Network contradicted his 2003 vote against Illinois’s Born-Alive Infants Protection bill.

Emphasis mine. In 2012, the WaPo admitted that if they’d actually bothered to do any research on Barack Obama in 2008, they “could have” noted his untruth. But they didn’t and it was years ago, and by September 2012, it was clear to anyone with eyes that Obama would be re-elected, so it was safe to finally bring up the subject.

And of course, back in early September of 2012, news junkies like me didn’t even see that fact-check — I would have noted it, if I had — because we were busy wondering about the weird, disjointed and contradictory stories and explanations coming at us regarding Benghazi and the death of Ambassador Chris Stevens, as well as the barely-reported-on attack at Camp Bastion. Seems a time of profound distraction and obfuscation was a good time to finally cover the not-difficult-to-research Born Alive story and create some plausible deniability so that, down the road, the WaPo could in fact say, “see? We covered it. A little late, but we covered it!”

But I must note that even as they “covered” it…they did not illustrate the Four Pinocchios they “could have” awarded to Obama. The subject is “covered” but buried discretely and with no long-nosed wooden boys to help a reader find it.

Do you know what’s odd? I just realized that on the Gosnell story, I wrote a post giving the press some prompts on questions it could be asking. Seems I did that in September 2012 about Benghazi, too:

1) If no one gave an order to “stand down” who gave the order to “go save”?
2) If no one gave an order to “go save” just what exactly did the President, the Sec State and the Sec Defense do while they watched Benghazi burn over seven hours. There must be some paper trail, somewhere, that shows us that responsible action was taken, yes?
3) Did they all just vote “present?”
4) Why would you go to the UN, and lie about what happened in Benghazi to the whole world, even as your own spokespeople were admitting that the situation there had nothing to do with a damn video?
5) Was this a gun-running operation? Or some kind of October political theatrical gone bad?
5) People in your administration lied to the public. Should not a few resignations be on the president’s desk? Why isn’t the president asking for them?
6) Does lying not matter any more?

I really do hope that 2013 is the year the press takes a look at itself and understands why so few trust them, or why their motives are so often no merely questioned, but assumed. Can mainstream media folk break the habit they appear to have gotten into (perhaps all unwittingly) of only covering stories that play to a narrative, and downplaying/burying anything that does not fit? I really would like to believe that we still have a free and unencumbered press, willing to ask difficult questions regardless of who is in office, or what policies a story touches upon.

If we do not, the country is basically over.

But I want to believe.

John Fund: The Media after Gosnell
RCP: “What do you have to do to make Page 1?
NBCPhilly: Gosnell Trial Enters Fifth Week
WaPo: We just found out about it!
Jay Nordlinger: Editors are the Deciders 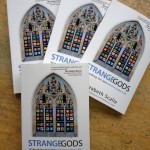 April 15, 2013 Pope Francis Endorses My Book, "Strange Gods"? - UPDATE
Browse Our Archives
get the latest from
Catholic
Sign up for our newsletter
POPULAR AT PATHEOS Catholic
1

Can the Latin Mass Restrictions Heal...
Femina Ferox
Related posts from The Anchoress