A Rave for “Save Send Delete”

“Outside of the subway, Catholic mass is the only place I have had that experience of diversity.”
— Danusha Goska, Save Send Delete 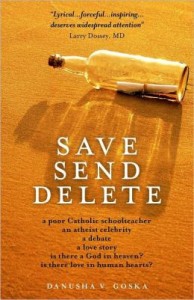 So, a month ago Julie Davis — our dear, delightful bookworm, Jules, who is such a Happy Catholic — made a kindle-gift to me of that book you see here, Save Send Delete, and I was caught somewhere between “thank you, that’s so sweet” and “why are you sending me more to read, don’t you know I have more reading than I can keep up with, already?”

I can be a real ingrate like that, sometimes.

Well, I did thank her and a few nights ago I finally started the book and well…yes…you should read it; I now perfectly understand why Julie has been raving about it, and calling it one of her 10 Best Books of the Year, and why Jeff Miller concurred in his review. This is a splendid and insightful and fun novel (in the way only epistolary novels can be really voyeuristically fun) that is lyrically written. For Catholic readers in search of good Catholic fiction that reflects something of what it means to be passionately Catholic in a post-Christian, secularist and politically correct era, the book is almost cathartic.

The book’s protagonist, Mira (who should be a blogger, here at Patheos!), is an adjunct professor dealing with the world as it is and carrying on an email correspondence with a rather famous atheist, “Rand”, who lives in England; the reader sees only Mira’s emails but one easily understands what her correspondent has been saying in his responses. I have just passed the part where Mira (while writing intelligently and respectfully of each tradition) explains to Rand how she could never be a Buddhist, nor a Hindu, nor a Pagan, nor a Muslim, nor a Protestant and I was very impressed with it. But I also liked what came before — a ringing admonishment toward Rand, who had clearly used the tired complaint about the violent, mean God of the Old Testament:

You cherry pick; you speak only of the angry God of Exodus who brings plagues on Egypt. You don’t mention that angels want to sing praise songs to God for the drowning of Egyptian charioteers in the Red Sea. God forbids the celebration: “Don’t sing praise to me to celebrate the drowning of my handiwork” he says. This is a God who loves even the Egyptians who enslaved the Jews. That story is from the Talmud, by the way, and you need the Talmud to understand how Jews understand the Old Testament. Judaism is a family, one that has ever been in a perpetual conversation. Community is built right in to Judaism. You need ten adult males — a Minyan — for public prayer. Women tend to be more religious than men. Women will show up. Getting the men there is the challenge. The Minyan builds into Judaism the need for men — and community. It’s just one of the traditions that have kept it alive for thousands of years. Look at a page of the Talmud. Commentary circles text. Everybody gets his two cents in. God is known and lived through give and take.

You know, that just took my breath away in ways I can’t yet articulate, because I haven’t fully processed it, yet. But Mira (Goska) has very casually dropped a bomb into that paragraph that touches on the fullness of human experience, from beginning to today, and on why — for God-haters — the Jews shall always been the most loathed and first-targeted of their programs and policies and pogroms. It’s not just the eternal covenant, their chosen status: its because in their traditions (especially within those that stubbornly refuse to conform to times and trends) are the ever-fruitful seeds of community and continuity and order that are reflected (and brought to fullness) in the Catholicism that (beneath veneers of civility) is only slightly-less-despised. Order is the enemy of the agents of chaos.

So, thank you, Julie Davis for the gift — it is gift in more ways than one. I’m loving Save Send Delete and expect that it will be one of those books I finish and then go right back into. Certainly one for the summer-reading lists.

May 10, 2013 Catholic and Christian Themes in Star Trek?
Browse Our Archives
get the latest from
Catholic
Sign up for our newsletter
POPULAR AT PATHEOS Catholic
1