What Pope Benedict Wrote about the Shroud of Turin 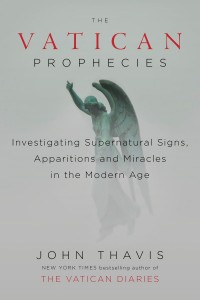 An excerpt from John Thavis’ new book, The Vatican Prophesies: Investigating Supernatural Signs, Apparitions, and Miracles in the Modern Age“:

As one might expect, Pope Benedict, who was often called “the pope of reason,” was much more circumspect on the [Shroud, than Pope John Paul II.] He, too, was interested in the Shroud and had stood before it as a cardinal. As pope he ordered the extraordinary exhibition of the Shroud in 2010. Benedict himself flew to Turin to venerate the cloth and gave a speech in which he described the Shroud as an “icon,” a term that disappointed some of its devotees. In the code language of the Shroud, “icon” denotes just a holy image, while “relic” is the genuine object. But this was an icon with a capital “I” — literally, in the official text of the papal speech — which signaled some support for authenticity. Benedict added that the Shroud was “a winding-sheet that was wrapped round the body of a man who was crucified, corresponding in every way to what the Gospels tell us of Jesus.” That appeared to reject out of hand the theory that it was a medieval artistic creation. The pope then went o to speak of the Shroud in dramatic and poetic language that moved many of his listeners: “The Shroud is an Icon written in blood; the blood of a man who was scourged, crowned with thorns, crucified and whose right side was pierced The Image impressed upon the Shroud is that of a dead man, but the blood speaks of his life. Every trace of blood speaks of love and of life. Especially that huge stain near his rib, made by the blood and water that flowed copious from the great wound inflicted by the tip of a Roman spear. That blood and that water speak of life. It is like a spring that murmurs in the silence, and we can hear it.”

Beautifully said, isn’t it? Not surprisingly, because the book is by John Thavis it is very well done — neither sensationalistic nor snarky; he writes of difficult things with respect and integrity, and leaves the reader wondering, but not worrying. I highly recommend The Vatican Prophecies. Most enjoyable, and hey, Halloween is coming! This is good reading for a chilly October weekend, as we gear up for All Saints Day, and All Souls, and then start settling in for winter!

As with his last book, The Vatican Diaries, I had a chance to interview Thavis, once again, and he was as interesting as last time, very willing to answer my questions about what is known and what is weird.

Your chapter on exorcisms seemed pretty harrowing. The church has a healthy skepticism of demonic possession, and yet Pope Francis has continued the emphasis on exorcist training begun by his predecessor: what does the church see happening, in the real world?

Pope Francis talks a lot about the devil, and his approach is actually very practical: He sees the devil as a real force leading people into evil, often through bad habits like gossip. He does not describe Satan as a figure that possesses people against their will. Vatican officials generally downplay possession, too. When the new rite of exorcism was unveiled several years ago, one Vatican official said cases of true possession were “very rare.” Many exorcists, on the other hand, believe that possession is fairly common, and that people need the ministry of exorcism to free themselves from this form of spiritual suffering.

What I see changing, especially among U.S. exorcists, is a willingness to work with psychological sciences in evaluating cases of suspected possession. They are more open today to the possibility that they may be dealing with an emotional or mental problem, instead of or in addition to a spiritual problem. Modern exorcists are also constantly reminded not to exaggerate the devil’s influence. The Vatican does not want people to forget that Christ came to destroy the work of the devil, and that Satan’s power is not infinite, but is subject to God’s providential design.

October 2, 2015
A Simple Question for Nancy Pelosi
Next Post

October 16, 2015 Child Breaks Host in Half to Share With Divorced/Remarried Father
Browse Our Archives
Related posts from The Anchoress