When Workplaces are Wussified May 9, 2013 Elizabeth Scalia

:::WARNING: The very funny and insightful essay and link I am about to present to you contains a variation of the “S” word and several renderings of the “F” word. If you cannot handle the “F” word in any context, please do not follow this link. Go write me a letter about how scandalized you are that any Catholic site would dare to suggest that you read something that contains the “F” word, and then, rather than tempting yourself away from charity, tear it up and pray for me, instead. You are formally warned.

If you read further, you might be tempted to press the link and see “S” and “F” words, so stop reading, right now. END WARNING:::

“Bullshit” Is One Word, “Performance Review” Two
by Larry McCoy

I had just arrived in the newsroom for my shift as a copy editor when a manager came over to my desk and declared, “We need to discuss your goals.” I was 66 years old – past retirement age, damn near old enough to be his father – and he wants to discuss my “goals.”

“Go away,” I told him. Preparing to take over the main desk was always an extremely hectic part of the day. I was “reading in,” as journalists call it, looking at all the stories that had been edited that day by the main desk. It was impossible to read every story from start to finish, so you skimmed some, skipped some and made sure you thoroughly read the big ones you knew would be changing once you took over the desk.

Floyd, the name we’ll give the manager, wasn’t attuned to the idea of a right time and place to do things. Like a squirrel digging for nuts, Floyd kept at it. “We have to discuss your goals sometime. It’s part of your Performance Review.”

Floyd was both dense and tone deaf. He wouldn’t go away. If only Floyd were as dogged in fleshing out a good story. The Performance Review had to be done, he said. I wasn’t going to budge either. It was a crock – something dreamed up by the morons in Human Resources who had nothing to do and, worst of all, absolutely no experience in newsrooms. They all ought to be fired, I said, several times in several ways. This back and forth continued, with the volume of each exchange rising, until the magic words came out.

Read Larry McCoy’s whole piece, and ponder that picture above, and the one below. How did we get from there — brazen enough to walk the sky — to the cowering, over-serious and grim reality of today’s gray-cubicles-gray-minds-MBA-saturated-workplace bureaucracies?

A man I know began working 20 years ago at a large corporation that he deemed it a pleasure to work for. The CEO and founder was (gasp!) a commoner, an ordinary engineer who had an idea and ran with it. Perhaps because he had worked for a living, and had not simply stepped out of a “good” school with an MBA, he knew how to treat the people who worked for him; compensation was generous; enthusiasm and imagination brought perks, and morale was high. People worked late because they were excited; they wanted to keep working.

Then the CEO sold his enormously successful company to a corporate giant. Out went the upper management that had been honed “from the ranks,” as it were. In came the suits; the suave and studied men and women — from schools of business, rather than engineering — who could talk about what wine went with what entree, or their walking holiday in Burma, but had no understanding of the dreamers (and engineers are dreamers, before they are anything) whose knowledge and imaginations they needed to ensnare and encourage, and whose intelligence and dignity deserved respect.

Not just respect, but inclusion.

Morale quickly went down. Working for suits who knew all the “theory” of business, and how to read numbers, but had not the least understanding of what made a “human resource” so resourceful, the engineers and developers and testers and marketers and admins began to rush out the door as soon as the clock struck five. The fun was gone, the energy sapped; enthusiasm was no longer on the radar.

People who work late, these days, do it because corporate downsizing means they are doing the work of 1.5 people; they must work 16 hour days, just to stay on schedule, if they want to keep their jobs. There are no longer burning the midnight oil by choice.

These suited MBA’s can’t seem to get it. Huddled in their enclaves, they have difficulty understanding that a hard-working engineer with excellent problem-solving skills, a positive outlook and a knack for team-building needs more than an official performance review that ends with a condescendingly vague note about his being “a valuable member” of the collective whole. He needs recognition of himself; the individual he is, the singularity of his abilities. He needs to know that he may dare to dream of more, that there is, for him, a chance to move into the upper echelons of the company, even if he really would prefer a Diet Pepsi with his Salmon TarTar, rather than a $150 bottle of wine.

The same elitism that has overwhelmed government and left it out-of-touch with the people they were meant to serve has infected the workplace, and it is demoralizing the work-force. The man I know has considered moving to a new job, several times, but friends of his who have moved report that it is the same everywhere: there is a class divide, and the urbane upper-management sorts seem not to understand that managing people means more than making sure you have an appropriate women-to-men ratio. It means valuing not just an employee’s skill, but the whole, human person. It means understanding that sometimes passion trumps policy, and should be encouraged; that every raised voice should not require a negative notation to the personnel file; every case of “hurt feelings” should not require three-days of “sensitivity training,” until your fed-up employees choose to divest themselves of anything smacking of personality, color, emotion or enthusiasm, simply to avoid the grim “facilitated interface,” full of meaningless corrective language, that will send him back to his cubicle feeling frustrated, confused, emasculated (even if “he” is a female) and ultimately defeated.

The men who built the Empire State Building stood on bare planks to work in the sky; paradoxically, they were grounded in reality, not theory. They did not have to concern themselves with tones and timbres; nor did the educated architects who dreamed up skyscrapers. One suspects that if either the man on the beam or the one with the blueprints had been approached by a tanning-booth-bronzed-and-manicured corporate bureaucrat, and asked to enumerate their “goals” as part of their “performance review” they both would have hooted at him in derision. “My goal,” the first would say, “is to not fall. It’s to stay alive so I can pick up my pay, have a beer with the wife, raise the kids and get into heaven a half-hour before the devil knows I’m dead.”

“My goal,” the architect would say dismissively, “is to make your jaw drop, and the drop it some more; I want to build a mystery!”

Very likely the bureaucrat — too timid to walk the sky, and too unimaginative to even conceive scraping it — would have found their answers vague, and given both of them low marks in team-building, professional comportment and attention to guidelines. He would recommend training meant to get them comfortable with thinking and living inside the approved boxes, “and at no point should such recklessly lighthearted men be considered for promotion,” he would write.

Deacon Greg Kandra, who once worked for Larry McCoy, remembers a newsman.

UPDATE:
The NY Times wonders, Is it time to review workplace performance reviews?

UPDATE II:
From a very different setting and perspective, Fr. James Martin finds himself all out of patience with another sort of grimness that lacks imagination, understanding and courage, because they don’t think you can build a mystery. Don’t miss it.

Discovered in archives; reposted from October of 2010 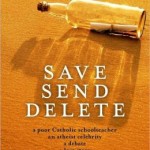 May 9, 2013 A Rave for "Save Send Delete"
Browse Our Archives
get the latest from
Catholic
Sign up for our newsletter
POPULAR AT PATHEOS Catholic
1