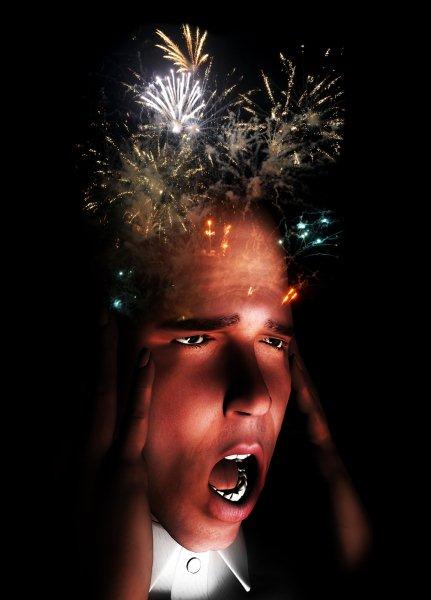 Lots of exploding heads on the internet today, thanks to this headline, which will, naturally, be over-emphasized by the press. But it is certainly worth noting:

Pope Francis reached out an olive branch to the gay community Monday, saying that he won’t “judge” gay priests.

“If someone is gay and he searches for the Lord and has good will, who am I to judge?”

The pope’s predecessor, Pope Benedict XVI, authored a document that said men with homosexual orientations should not be priests. Francis is softening that position, saying gay clergymen should be forgiven.

It is unfortunate that our Holy Father does not use English, because it leaves me wondering about translation or, in the case of this story, a reporter’s own misunderstanding of Catholic teaching. Did he say gay clergymen should be “forgiven”? That’s doubtful — as John Thane points out — and wouldn’t make sense, because it presumes that gays sin simply by being gay, which the church does not teach. A fuller reading of that section of his impromptu Q & A with reporters:

“A gay person who is seeking God, who is of good will — well, who am I to judge him?” the pope said. “The Catechism of the Catholic Church explains this very well. It says one must not marginalize these persons, they must be integrated into society. The problem isn’t this (homosexual) orientation — we must be like brothers and sisters. The problem is something else, the problem is lobbying either for this orientation or a political lobby or a Masonic lobby.”

Then again Francis’ remarks were part of a discussion about the “gay lobby” within the church, and one of his appointees in particular, whose faithfulness has been questioned by some. In that context, Francis’ remarks are worth noting:

“I did what canon law requires, which is to conduct a preliminary investigation. We didn’t find anything to confirm the things he was accused of, there was nothing. . .I’d like to add that many times we seem to seek out the sins of somebody’s youth and publish them. We’re not talking about crimes, which are something else. The abuse of minors, for instance, is a crime. But one can sin and then convert, and the Lord both forgives and forgets. We don’t have the right to refuse to forget. . .it’s dangerous. The theology of sin is important. St. Peter committed one of the greatest sins, denying Christ, and yet they made him pope! Think about that.”

Increasingly I think this pope’s motto should have been “go and learn what this means: I desire mercy.” (Matthew 9:13)

Forgiveness, and the recognition that people can sin and then repent and live faithful lives with the help of God’s grace, is so basic a tenet of Christianity I’m not sure I understand why people are having difficulty with this. When a friend of mine suggested that “even if” the priest in question had repented, “he should not be in such a position of prominence. It gives scandal!” I disagreed. To proclaim a Gospel of Mercy and then only permit a man or woman who has converted their lives in Christ to assume lesser or menial positions is to say we do not trust our own teaching — Christ’s own teaching — about mercy. The pope is correct; by that way of thinking, Peter would never have been given the keys to the kingdom. We are the church of Saint Mary Magdalene and Saint Paul; sinners who were first forgiven and then trusted with prominence.

I understand some folks’ concerns that perhaps Francis is too heavy on the mercy and too light on the justice side of things — and certainly the cross itself teaches us that both must be held in balance. But this is still a pretty fresh papacy. The sense I’m getting is that Francis means to scrape some long-attached barnacles from the Barque of Peter, so we can see what the deeper hues of Justice and Mercy look like; he’s readying it to travel some rough, challenging waters.

I wonder who will jump ship? Last night I debated a woman with her skirt over her face about our bishops having a little fun, in Rio. She thought it was scandalous and silly and unbefitting the church. I thought our bishops — after a terrible decade — were finally being allowed to exhale!

Not long ago, I watched heads explode when when Benedict XVI was pope, now it’s ‘Splode! ‘Splode! ‘Splode! again, but from the other direction. Peter is always a controversial man. That eating with the gentiles stuff, and all. This morning, I am watching heads going all ‘splody all over the place, (because the internet is nothing if it is not a place for hysterical over-reaction and hand-wringing) over Francis’ pronouncement “on gay priests”.

I’ll tell the new hysterics the same thing I told the old hysterics: you’re gonna be surprised who makes it into heaven and who doesn’t, because it’s not going to line up with what you or I think is Catholicism-done-Correctly, so be sweet to everyone, mind your own soul, not theirs, and trust Jesus to sort it out. He is, after all, the one whom God appointed to judge, and “Not everyone who says to me, ‘Lord, Lord,’ will enter the kingdom of heaven, but only the one who does the will of my Father who is in heaven. Many will say to me on that day, ‘Lord, Lord, did we not prophesy in your name and in your name drive out demons and in your name perform many miracles?’ Then I will tell them plainly, ‘I never knew you. Away from me, you evildoers!’ (Matthew 7: 21-23

It’s easier to react and indulge in a feast of high-drama when a pope does something that you or I think seems incongruous to our understanding, and yet is part-and-parcel with Christ’s own words. I have a great reverence and love for the Pope Emeritus, Benedict XVI but his decision on gay priests — made during a period of crisis and deep scandal, when all sorts of actions were being demanded of the church — was one I always hoped he would change, because it always seemed so foreign to Benedict’s own writings on mercy. I wrote about that, here:

I wonder if her bishops and religious leaders will, for example, have to acknowledge with loving support the numerous celibate homosexual priests who, throughout history and still today, serve her faithfully, courageously, and with great joy. Such an acknowledgment could go a long way repairing that disconnect that keeps everyone talking about tolerance while walking away from it.

It would speak to the value of the human person as he is created; it would reinforce the church’s own teaching that the homosexual inclination is not in-and-of-itself sinful; in a sex-saturated culture where “gay” has become in some minds synonymous with “promiscuous” and both heterosexual and homosexual couples see no particular value in chastity, it would present the radical counter-narrative.

Most importantly, such an acknowledgment would be call of olly-olly-oxen free for the church herself. Battered by the revelations of the past decade, poorly served by past psychological studies suggesting that child abusers could be “cured” and therefore distrustful of more recent findings that homosexuals are no more inclined to pedophilia than heterosexuals, the church has reflexively pulled the curtains over a number of her priests, and in doing so, she has hidden the idea of “acceptable otherness” from a flock that is sorely in need to see some of it.

It is a self-protective move—and given the way the church is portrayed in media, a somewhat understandable one—but in making it, the church is being dishonest. Worse, she is contradicting the message—the very consoling and urgently needed message—that we are created perfect in God’s eyes, and therefore must be acceptable to each other, no matter the extra-chromosome, or the physical imperfection, or the “other” way of feeling and looking and being.

A generation in turmoil needs to hear it. A church that survives by the grace of the Holy Spirit needs to breathe it.

Benedict did what he had to do to see the Barque of Peter through a devastating storm. After a terrible, penitential and spirit-challenging decade, our bishops are being allowed to exhale; our faithful gay priests are being allowed to exhale. Perhaps the whole church needs to unclench its jaws, relax and breathe for a little while, before we face the next stormy crossing, with Peter still at the helm.

Take a deep breath and let it out, before your head explodes. Then, let us all, like Solomon, pray for wisdom and “an understanding heart.”

UPDATED I:
Jimmy Akin puts Benedict’s views on gays in context because the mainstream press won’t.

UPDATE II:
Mollie Hemingway at Get Religion makes an important distinction between priesthood and formation and then wonders why this specific statement actually a story at all and is unimpressed with mainstream press reportage. I’d argue that previous unimpressive mainstream reportage is why this is a big story: because the press has framed previous popes, and the church as a whole, as a big gay hating enterprise.

UPDATE III:
For those who can read it, here is a Spanish report on the Pope’s remarks. I do wish he spoke better English.

UPDATE IV:
If you still feel inclined to hyperventilate, read this wonderful quote from the Pope Emeritus

UPDATE V:
Dwight Longenecker says the press is going to run on Francis…at some point.

RELATED:
God not only forgives, but forgets: “we don’t have the right to not forget.”

“You have saved me from the pit of destruction, when you cast behind your back, all of my sins.” (Isaiah 38-17) I know in my life I’ve needed God’s mercy far too much to be cheap with it.

July 27, 2013
Too much earthly dross? Here's your Palate Cleanser
Next Post

July 30, 2013 Don't Tell the Press that Francis is Using Them
Browse Our Archives
Related posts from The Anchoress