No rant here, just clear demonstration of our terrifying ignorance and disconnection from our recent past:

Questioner: What was the Holocaust?
American College Student: Um…I’m on the spot.

Questioner: Which country was Adolf Hitler the leader of?

Questioner: What was Auschwitz?
American College Student: I don’t know.

Questioner: What were the Nuremburg Trials?
American College Student: I don’t know.

Questioner: How many Jews were killed?
American College Student: Hundreds of thousands.

Q: What other groups were targeted besides Jewish people?
ACS: The African Americans? Here in the United States they used to discriminate because of skin color…

Q: Where is Normandy?
ACS: It’s over near like England and Germany and all that jazz. It’s not a peninsula, but…

Q: Who was Winston Churchill?
ACS: “He was a general, right?”

This is depressing on so many levels. If they are not obliged to by law, our public schools do not teach about the Holocaust, or World War II? I’d love to know if they are aware of the Marshall Plan, the Berlin Airlift? Pearl Harbor? This is pretty recent history!

Watch it to the end. The woman makes her point, very well, and with no acrimony. 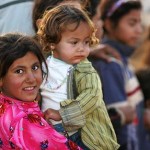 Catholic
Weidenfeld: Better, Braver than Those Seeking to Lead/Rule
The Anchoress