It’s true: if I only got my news from the Mainstream Media, and did not stop in at Instapundit’s place every single day, I’d never know what was going on. My day is just too busy to read everything, even though I subscribe to many news sites. Glenn Reynold’s editorial eye and pithy — often hilarious — commentary are invaluable to me.

Take this story, for instance. I had no idea that the Obama Administration was going all “Let’s Create Pravda” on news outlets. Somehow, the major networks weren’t talking about it. But there was this column that ran last Monday in the WSJ: The FCC Wades Into the Newsroom; Why is the agency studying ‘perceived station bias’ and asking about coverage choices?

. . .everyone should agree on this: The government has no place pressuring media organizations into covering certain stories.

Unfortunately, the Federal Communications Commission, where I am a commissioner, does not agree. Last May the FCC proposed an initiative to thrust the federal government into newsrooms across the country. With its “Multi-Market Study of Critical Information Needs,” or CIN, the agency plans to send researchers to grill reporters, editors and station owners about how they decide which stories to run. A field test in Columbia, S.C., is scheduled to begin this spring.

The purpose of the CIN, according to the FCC, is to ferret out information from television and radio broadcasters about “the process by which stories are selected” and how often stations cover “critical information needs,” along with “perceived station bias” and “perceived responsiveness to underserved populations.”

You read that right. A commissioner at the FCC went to the oped pages of the WSJ about this — something of a whistleblower, Ajit Pai is — yet this story didn’t open any of the news shows I watched yesterday.

Perhaps the story didn’t get attention because people thought, “well, that’s such a ridiculously unconstitutional overreach that even our ‘constitutional scholar president’ would never be allowed to go there.” And perhaps that is true.

But shouldn’t it have been a story — a big story — that his administration even considered it?

I think so. But the same press that carried Obama into the White House on its shoulders (twice, while asking nary a question) seems to have developed a case of beaten-wife syndrome. The administration disrespects them, considers charging them with espionage for doing their jobs, spies on their peeps, and they barely manage an objection through their pleading eyes or trembling lips.

Fortunately, the FCC is now backing off. The headline at AdWeek: FCC Backs Off Study of Newsroom Editorial Practices; GOP said study violated freedom of the press

The Federal Communications Commission is quietly changing course on a controversial study after parts of the methodology were roundly criticized by GOP lawmakers and commissioner Ajit Pai for encroaching into editorial decisions and content at TV stations. . .Regardless of the study’s intent, it’s hard to fathom why the FCC sent its minions into newsrooms of the stations it licenses and ask questions about how stations exercise their First Amendment right.

So, the FCC, busted by an op-ed and obliged to respond to a GOP letter-of-inquiry dated…January 10, 2014…is “closely reviewing the proposed research design to determine if an alternative approach is merited.”

This has been a story for over a month, with no blaring headlines, and the FCC — who cannot have helped noticing the silence — will now go back to the drawing board, to design a more discreet means of bringing the administration’s brand of hope and change in the newsroom.

How interesting. And the GOP — despised and actively worked against by many in the heavily-Democrat-voting mainstream media — is responsible for at least slowing down the TASSing of our news outlets, because they pointed to the Constitution and the Bill of Rights.

Well, good for them. They have to know that it will matter not even a scintilla to the press that the GOP has, for a time, saved their proverbial bacon, and yet they’ve gone ahead and done the right thing, anyway. Because it is absolutely the right thing to do, whether or not the GOP gets so much as a curt nod of thanks from the mainstream press.

Seems to me the only way to get the press to do its job, anymore, is to elect Republicans, because you can bet that if a Republican administration had thought of invading newsrooms, you’d have heard about it. There would be justifiably outraged cries of “constitution shredding” and “Orwellian oversight” and (although Nancy Pelosi won’t believe it) political cartoons with brownshirts and men with tiny mustaches.

Too bad the Republicans are so messed up, creating and destroying new “saviors” every six weeks or so in search of the elusive re-incarnation of Ronald Reagan — a man who, when he was president, was often castigated by the right for not being pure enough. As we gear up for an overlong series of “Everything Hillary!”, the only GOPer who seemed capable of mounting a challenge against her was Chris Christie — that Planned-Parenthood-defunding-bully — but he’s been duly taken out by the press with an assist from the Tea Party, and various GOPers he managed to piss off. So it goes.

The press needs a GOP administration in order to save them from themselves, but I don’t think we’ll be seeing one any time soon. Not with mainstream media control over the national conversation, and the GOP/Tea Party World O’Hate and Recrimination Traveling Schism.

You know what else you’re not reading much about? The dry run attack against power transformers, and ultimately the grid. This guy admits to having heard nothing of it, before reading bad old Peggy Noonan’s piece last week. And you know, that big data base of information which, as Glenn Reynolds notes, could be used so artfully to break opposition.

You’re also not reading about that Little Sisters vs the Admin story? Why, that’s in the process of being spun and rewoven by the industrious and loyal wives. If they get it just right, he’ll love them again!

Nobody’s talking much about those things. Not the press, not even the GOP who argued for their sakes.

I’ve said it many times, and it’s worth saying again:

. . .we no longer need wonder why the mainstream media seems unconcerned about possible attacks on our first amendment rights to freedom of religion and the exercise thereof. They have already cheerfully, willfully surrendered the freedom of the press to the altar of the preferred narrative. People willing to dissolve their own freedoms so cheaply have no interest in anyone else’s freedom, either.

And they won’t have the clumsy GOP around much longer, to guard their weak flanks, as they did, this time.

Thank God for alternate media outlets — political, religious, and otherwise — for as long as they last.

UPDATE:
Jonathan Turley is very concerned about the enabling of the ever-expanding powers of the president:

I am astonished by the degree of passivity in Congress, particularly by Democrats. You know, I first came to Congress when I was a young page and there were people that fiercely believed in the institution. It didn’t matter what party held the White House. But what we’re seeing now is the usurpation of authority that’s unprecedented in this country.

I can’t help but wonder how much the “unprecedented” data base has to do with that. 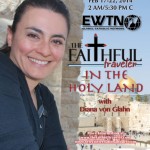 February 17, 2014 Make an In-Depth Visit to the Holy Land for Free!
Browse Our Archives
get the latest from
Catholic
Sign up for our newsletter
POPULAR AT PATHEOS Catholic
1

To Deny Joe Biden Communion is...
Femina Ferox
Related posts from The Anchoress

Need to Grade, Edit and So I'm Cross...
Whenever there's something big to do in my life, I usually look...
view all Catholic blogs
Copyright 2008-2021, Patheos. All rights reserved.
error: Content is protected !!