The Nun and the Rapper: “It’s All Good” Despite Naysayers

Yesterday’s piece at First Things discussed how an ingrained lack of gratitude can skew all of our reactions away from both generosity and joy. How we receive a good has a great deal to do with whether we receive more good.

In truth, within the continual embrace of the Creator, we are on the receiving end of constant-good. As the saying goes, “it’s all good,” except as our limited human perceptions may perceive.

It is precisely because our perceptions are so narrow, so unable to know what God knows, or see the long link-chain of our lives and how each event, large and small, “good” and “bad” acts like a solder, distinctly applied and meant to strengthen the whole, until we reach culmination and can finally let go of it.

In yesterday’s Gospel reading for the Annunciation, Gabriel says to Mary: “Elizabeth, your relative, has also conceived a son in her old age, and this is the sixth month for her who was called barren, for nothing will be impossible for God.”

There can never be “nothing” except where God is not, because he fills all things:

Where God is not, is where “nothing” comes into being. And this can only be a spiritual thing — a spiritual state of nothing — an active willing-away from God that opens up to nothingness and the Being of Nothingness, who is the evil one.

John tells us the same thing in the beautiful prelude to his Gospel: “All things came to be through him, and without him nothing came to be.”

When you understand that there is only “nothing” when God is absent, you realize that God is everywhere about you, in every moment and space of your life. It becomes very hard to remain uptight about things, because where God is, there is also his consent. God’s continual “yes” keeps everything going; the universe is still expanding, today, on the strength of his “yes.”

“It’s all good.” That’s unimaginable at times. A family grieving the loss of children cannot comprehend it at their depths and it would be inexcusably cavalier to ever utter those words to them, or to the victims of sexual assault, or abuse, or bullying, because it gives short shrift to their pain, and also to God’s mystery.

The only way to communicate “it’s all good” in the midst of what we can only perceive as “bad” is with the crucifix. Pondering the torturous death of the God-man, which also rode upon God’s “yes”, is the only way we may even begin to whisper the words, “it’s all good.” Because within the crucifix we see that God has a plan. Plans of fullness, not of harm. To give us a future, and a hope.

All we have to do, then, is believe, and roll back a stone.

I bring all of this up in the context of that piece at First Things because I got only a little kickback on it, but it was from people who took umbrage at being described as “bilious” and ungenerous when it came to Sister Cristina and her appearance on Italy’s “The Voice.” I imagine I could have been a little more balanced in the piece — I could have suggested that there is nothing wrong with being prudent in our praise of such new and as-yet-untried sorts of evangelization, because there really isn’t.

Still, I stand by the idea that how we receive a thing — and the quickness with which some people seem to need to denounce anything that outruns their comfort zones — is a gauge of our capacity for both gratitude and joy.

Instead of grousing, wouldn’t it be a better, and more productive thing, to wonder at the evangelical potential of partnership and pray for all concerned?:

When J-Ax finally speaks to Cristina, he tells her, “If I had met you during the Mass when I was a child, now I would be Pope. I would surely have attended all of the functions [awkward YouTube translator].” This is an incredible statement. If he had encountered her energy, her capacity for joy and faith in his youth, he would have gone all the way. He doesn’t say he would have wanted to date her or something. He says he would have been inspired to follow her, and that such a path would have led him to the top of the Church. He would have attended all of the “functions”—the Masses, funerals, baptisms, confirmations, weddings, ordinations, canonizations, papal elections, feast day parties, Theology on Tap nights, Brideshead Revisited marathons, vespers, holy hours—the “functions” that so many of us attend and take for granted every day.

Her reply is absolutely perfect in its clarity and simplicity: “Well you have met me now.” . . . [a similar encounter with grace launched] my reversion. How awesome it is to watch it happen to another soul through another means. . .Behold the transformation: Unselfconsciously, J-Ax smiles, cries, giggles, cries some more, wipes his eyes with his arms, curls up in his chair as if he wants to hide himself so she won’t see how ridiculous he looks. It’s like Adam covering his nakedness before God. While she is deliberating over which coach to join, you can see in his eyes the “Pick me! Pick me!” of every kid who ever wanted to play kickball. And when she does choose him—for he chose her first based on her voice alone—he leaps out of his chair, scoops her up in his arms, and spins her around to the sound of hundreds of cheering fans. What a moment.

Indeed. People can snark all they want about how “it would be better if Alicia Keys learned to sing like a nun, instead of a nun singing like Alicia Keys”. I don’t know anything about her faith, but how can such critics know whether Keys’ own soul won’t be moved Godward by seeing her song sung as a praise-psalm? How do they know anything beyond their fear of scandal?

And they also say, “nothing is impossible, with God.”

We live within the midst of a great battle between dark and light and — as Chesterton said as he died — “everyone must choose. Given the reality of that battle, I suspect the Holy Spirit knows what he is about and that the artistic partnership between a rapper and a nun is part of a plan, and a thread. For certain, it is not about “nothing.”

Comments are closed throughout Lent. 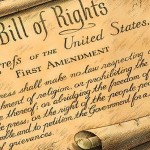 March 26, 2014 Constitutional Crisis: Freedom of Religion is Fundamental
Browse Our Archives
Related posts from The Anchoress

Catholic
Grief, a Joyful Nun, Misery-lovers & the Annunciation
The Anchoress