On social media and in email, people are expressing concerns about some of what they are hearing (or not hearing), coming out of the still-young synod.

I am, so far, much more alarmed by the expectational excesses that are being created in the secular press, and in a few Catholic media venues as well, by people who should know better, but can’t resist an impulse to politicize and to pretend that by the end of this thing, the doctrines will have been turned on their heads and the church will practically be Episcopalian!

This synod is a great big listening session, meant to inform a follow-up a year from now, wherein actual decisions on disciplines and creative redesign of failed catechetics may make their appearances. It will be much more “dramatic” than this gathering.

That said, I think the input of the laity over these two days has been very good; it has been faithful, but it also says, in essence, “we need, a little more affirmation that there is room to love.”

The Pirolas explained that their friends are faithful Catholics but also loving parents who wanted their grandchildren see them welcoming their son’s partner into the family. Their response, the Pirolas said, could be expressed in three simple words: “He’s our son.”

The Pirolas offered the episode to illustrate how clerics might learn something from families about how to strike a balance between upholding church teaching but also showing “mercy and compassion.”

Today, it was the turn of a couple from the Philippines who’ve been married for 27 years and also have four children. Both are involved in “Couples for Christ,” a lay association recognized by the Vatican.

Cynthia and George Campos told the bishops that at one stage they tried to launch an outreach program for couples in “irregular situations,” such as people who weren’t married in the Church, who are living together without marriage, or whose marriages broke down and they remarried without an annulment.

The organization didn’t get off the ground, the Camposes said, in part because they were told by Church officials that their group is meant only for couples married in the Church.

That experience, they said, led them to hope for more “enlightened pastoral charity” in the church, which could foster “innovative forms of accompaniment” and “inclusive participation in church life.”

It’s a shame — no, perhaps it’s a sin, one of omission — when a diocese loses an opportunity to reach out. The Diocese of Brooklyn is doing some excellent stuff with and for cohabitating couples. The laity have a lot to offer, here and ideas to propose during this synod, as well.

Deacon Greg has more on these lay auditors who are contributing so meaningfully to the synod.

We must develop more robust and creative methods to share the fundamental truth that marriage is a divine gift from God, rather than merely a man-made institution. This will require us to examine the methods by which we teach our children about the nature of human sexuality and the vocation of marriage. When speaking of the call by God to serve, marriage should be included in all programs designed to explore vocations. And, it should compel us to ask how we provide for the aftercare of marriage that can help couples deepen their relationship.

We therefore see the issue before us not as a crisis of truth, but rather as a crisis of methodology. How do we as a Church, effectively share what we know to be true in practical, simple and convincing ways, so that all men and women are challenged and supported to live life-long marriages and build homes that reflect the domestic Church? — Alice and Jeff Heinzen, USA

That’s excellent stuff! As with the previous quote, it’s getting down to brass tacks — the problems identified in the worldwide survey the bishops floated, and which spelled out just how poorly Catholics understand their own faith.

Simply put, the surveys floated last year, and the working document drawn from them, suggest that the synod absolutely must address the fallout from five decades of poor catechesis, that have been an aching void in the face of social revolution.

Most Catholics do not know their faith, and they do not know what they don’t know. The press may be having a great time trying to define the “most important issues” of the synod, but well-transmitted teachings are of fundamental concern. The church can’t really afford another 50 years of people careening about, absolutely clueless as to the well-reasoned theology that backs her teachings.

I’m not sure the world can afford it, either. The moment to argue for the credibility of the church is right now.

The Christians here who are asking for more room to express love to gay Catholics or divorced Catholics are not asking for what is not already available. Contra the narratives, homosexual persons and divorced persons are our brothers and sisters, welcome to participation (and subject to the same disciplines as anyone else) but the very fact that this is news to so many means we have not reached out with eager arms, nor transmitted our teachings well, not out of the Curia, not in our communities or our local churches.

Last week, I was glad to participate in a conference call anticipating the synod, whose panel included, among others, a very personable and clear Cardinal Raymond Burke and Father Joseph Fessio who fielded some challenging questions, including this one:

Peter Jesserer Smith (Nat’l Catholic Register): [After expressing frustration that Cardinal Kaspers proposals have dominated the conversation] do the panelists see that there’s a need to actually present a cogent program of how parishes can be on the front lines of addressing these pastoral problems for married people and the family?

Father Fessio: I believe that many, if not most parishes already have a cogent program and the church has a wonderful program and a pastoral program that’s been in place for centuries. I think the idea of trying to change it on a doctrine level as Kasper proposed is a red herring and it’s a problem. Let the journalists propose things I mean if you want to propose something. Why should the panelists have to do it?

The phone conference had gone on a lot longer than scheduled, and many were getting a bit tired, especially the panelists, and that’s perhaps why Fr. Fessio missed the point. The question was not seeking more discussion of Kasper’s ideas but was instead looking for concrete notions about precisely the issues these lay auditors have been addressing. Our teaching on marriage has been in place for centuries, yes, and it is theologically sound. But one need not strain to identify where — as panelist Helen Hull Hitchcock admits later in the session:

Those teachings have not been adequately transmitted. The evangelical mission of the church to transmit those ideas has not been adequate and I hope that following this year, which has not only the Extraordinary Synod next week and the one next year, but also the world meeting on the families in Philadelphia, that there will be much more concentration on how do we get this message across. It just has not really penetrated.

As Lisa Hendey notes, this synod is fascinating and well-worth paying attention to, either online or via this useful app.

Tom Zampino: We are all Priests, and that’s not what I expected

October 7, 2014
Collegiality or Papal Unilateralism? Be Consistent Reformers!
Next Post 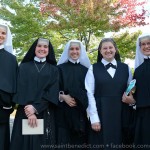 October 8, 2014 2 Late (as in New) Entries to the Vocation Post - UPDATED
Browse Our Archives
Related posts from The Anchoress