When Neither Will Do: Either/Or Gives Way to Both/And

When Neither Will Do: Either/Or Gives Way to Both/And October 23, 2014 Elizabeth Scalia

Part three in the ongoing Saga of the Satchels, or “what happens when Lizzie tries to do something really simple and girly, like buy a new handbag.”

So, these arrived yesterday, both of them: 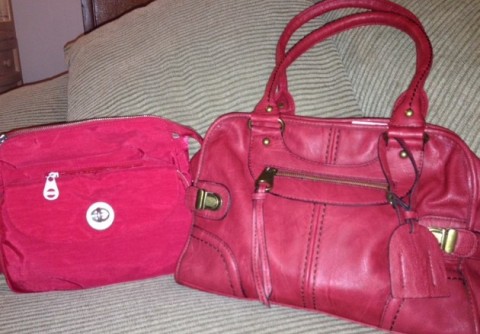 On the left, the red Baggallini, which is a little larger than the bag I have carried for five years, but a little smaller than I had hoped. It may yet be too small to stash a light scarf. But I still really like it.

On the right is the red vintage Scarleton bag, with which the devil Hallie Lord tempted me. And its way bigger than

Now I own them both. For the first time in my 56 years I own two red handbags. And, I will be perfectly honest, I am still kind of coveting the red 9 West bag.

What is happening to me?

When both bags arrived, and I put them beside each other, I felt like a decadent and shameful materialist. Our house has far too many things, and as a Benedictine Oblate I try not to allow myself to get too caught up in ownership, or acquisition. I’ve even stopped buying the Icons I crave for my oratory because it seemed like I was getting over-attached to things, even Holy Things.

I was confusing wanting with needing.

In America, in the West, we have hugely, culturally, confused want with need, and our houses are stuffed-to-bursting with things we could lose in a housefire and not really miss.

Think about it. Of all the clothes in your closet, you wear the same couple of things over and over again, right? Despite all the pairs of shoes, you likely have two or three pair — okay, perhaps five, if you’re a woman — that you really keep going to. The rest of it? It’s just stuff crammed into the closets, perhaps because in our minds closets are meant to be full, and if they’re not, they perhaps stir up feelings within us — perhaps fears of emptiness.

And yet continual acquisition is a symptom of emptiness, itself. In Strange Gods I wrote of a relative who had passed away; a man with a good job and income who was nevertheless perpetually in debt, his credit cards maxed out. After his death, we understood why:

When he died and the family was tasked with clearing out his belongings, the job was a monumental undertaking. Walking from attic to basement, from cluttered room to cluttered room, we kept asking ourselves, “How can one man have so much stuff? Why did he need all of this?”

The answer, I thought then and still think now, was that there was a void in his life he could not fill on his own, no matter how much material stuff he threw into it. Although he had many friends and was dearly loved by his whole family, there was an emptiness that had gone unanswered. He was a victim of the exact spiritual poverty that Blessed Teresa described. He was a privileged member of the community whose extras, as Saint Benedict taught, were only evidence of the depths of his need and his entrapment by all he possessed.

It reminded me a bit of the famous quote from The Brothers Karamazov:

For the world says: ‘You have needs, therefore satisfy them, for you have the same rights as the noblest and richest men. Do not be afraid to satisfy them, but even increase them’ – this is the current teaching of the world. And in this they see freedom.”

So, I ponder these two bags and contemplate my need. That I need a new bag is indisputable. The need is genuine. But do I need two?

Neither of them perfectly suits my need. The Baggallini is a little too small. The Scarleton is a bit too large. Both of them do, however, fit part of my need.

If either of them could perfectly serve, there would be no dilemma. In a world of either/or, I would keep the perfect one, and return the imperfect.

But, because neither wholly fits the bill, I find my self in a both/and situation. They are both imperfect, but also both useful, therefore neither should be cast aside. In winter, when the need to store scarves and gloves is greater, the bigger bag is necessary; in summer, when we travel lighter, the smaller will do.

I can’t help seeing this as analogous to our current wrangling within the church — the back-and-forth tussle between the agents of uber-justice and those of uber-mercy, between those who seem “full” and those who are “lacking.”

If any of us were perfect, we could afford live in a church of clear either/ors and put aside those who do not quite fit.

But since none of us is perfect, and all of us have our role to play in God’s own designs, none are to be cast aside; rather we live as a church of both/and, all of us to be used as God will, in due season.

I will use the too-big bag in winter; the too-small in summer. Nothing will be cast aside in favor of a perfection I am not about to find.

Even God likes to see a variety of looks within his world, season after season. The scenery changes; only his fundamental being and stamp — all-justice, all-mercy, all-truth, all-law, all-love — do not.

October 22, 2014
Good for Voris; Now, About our Tendencies Toward Idols...
Next Post

October 23, 2014 Francis is a Chemist; Chemists Seek Out Surprises
Browse Our Archives
get the latest from
Catholic
Sign up for our newsletter
POPULAR AT PATHEOS Catholic
1